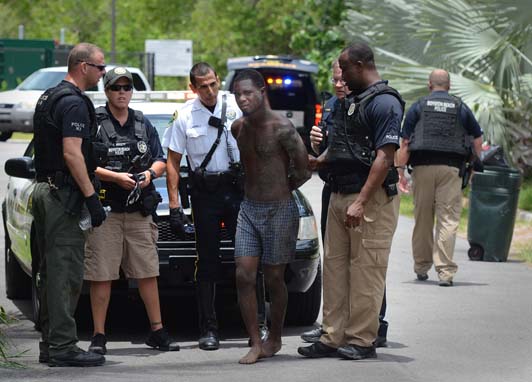 A man that police allege is part of a "pillow case" gang from Lauderdale Lakes in Broward County was arrested on Coconut Lane in Ocean Ridge on the afternoon of July 9 after escaping from  officers during an earlier apprehension.

Ocean Ridge and Boynton Beach police officers (including a K-9 unit), and the Palm Beach County Sheriff's helicopter were called into action after a resident called police to report suspicious individuals on Harbour Drive North.  Police determined the individuals were wanted for robbery and arrested the four men — one of whom escaped and led law enforcement on a half mile chase through Ocean Ridge neighborhoods. The suspect was transported to Bethesda Memorial Hospital for a reported dog-bite.
Photo by Jerry Lower/The Coastal Star
Tags: capture, chase, ocean ridge, police, robbery
E-mail me when people leave their comments –
Follow