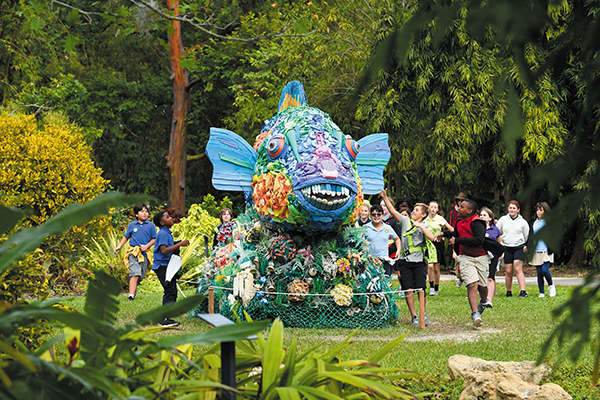 ABOVE:Visitors to Mounts Botanical Garden gather around a sculpture of ‘Pris­cilla­ the Parrot Fish,’ composed of marine debris collected from Pacific beaches. BELOW RIGHT: Detail of ‘Sebastian James the Puffin,’ created from rubber pieces and other marine debris. Photos by Jerry Lower/The Coastal Star

Since “Washed Ashore” arrived at Mounts Botanical Garden in early December, the crowds have been rolling in, too.
“We’ve seen a 50 percent to 65 percent increase in daily attendance,” says Rochelle Wolberg, the garden curator. “Visitors love the exhibit; they’ve never seen anything like it before. They love the fact the sculptures can relate to all ages but that the message is thought-provoking and deep with regard to environmental stewardship and taking care of the earth.” 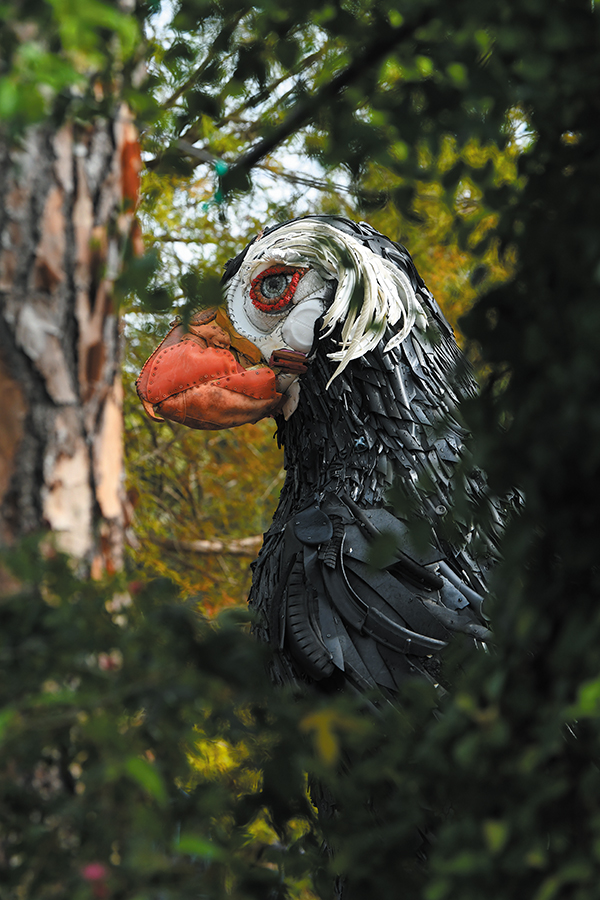 The 10 sculptured sea creatures of “Washed Ashore: Art to Save the Sea” are 12 to 16 feet in length and up to 15 feet in height. The shapes include a puffin, a marlin, a seal, humpback whale tails, a parrotfish, a jellyfish and a sea anemone with blades that rattle when you shake them.
Each one is made of pieces of plastic and other debris collected from the beach.
“We try to make them big because it’s a very big problem — plastic pollution in the ocean,” explains “Washed Ashore” artist Angela Haseltine Pozzi. “From a distance, they’re beautiful. Up close, they are horrifying. You realize this is all garbage, pollution, on the beach.”
Young viewers are quick to understand the message of “Washed Ashore.”
“Kids get it right away how wrong it is,” Pozzi says. “It’s an education exhibit is really what it is.”
“Flash the Marlin” looks like a marlin; but when you look close, he is made of sunglasses, toothbrushes, water bottles, fishing lures, fishing poles and a toilet seat.
“Priscilla the Parrot Fish” is colorful and cheerful; but closer inspection shows she is made of bottle caps, buoys, lighters, beer cans and a bowling pin.
“Lidia the Seal” looks cheery, too; but she is made up of lots of plastic lids, flip-flops, beach toys, flashlights and a soccer ball.
“It does help to reach the children,” Pozzi says. “I really encourage people to take their families.”
The exhibit’s educational and environmental message is getting around. “Washed Ashore” exhibits have been held at the United Nations and the Smithsonian Institution.
“We’ve made about 70 works of art out of 21 tons of garbage in the last seven years,” says Pozzi, who designed all the sculptures and made the heads and tails and fins and feet in Bandon, Oregon. 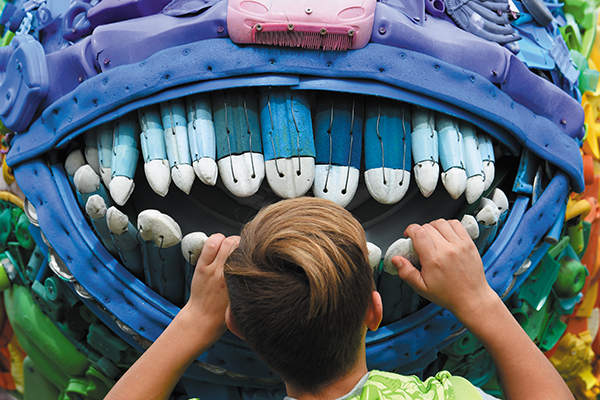 The teeth of ‘Priscilla the Parrot Fish’ are floats from a drift net.

The debris was collected from Pacific beaches and was washed and sorted by color, shape and type.
“It’s a very, very labor intensive process,” Pozzi says. Thousands of volunteers help through community workshops, building small parts of the project and, of course, collecting trash — much of it plastic.
Wolberg says “Washed Ashore” was a natural fit because “Mounts is really invested in the theme of water and environmental stewardship.”
She described the “Washed Ashore” sculptures as “whimsical, colorful” and “with a very strong message.” 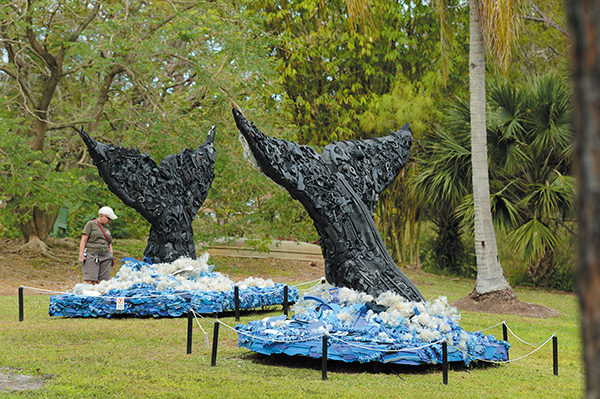 ABOVE: Humpback whale tails appear to dive into the depths at Mounts Botanical Garden. The tails have tire pieces, flip-flop soles and other dark debris. BELOW: Children play tunes on the ‘Musical Seaweed’ at Mounts. 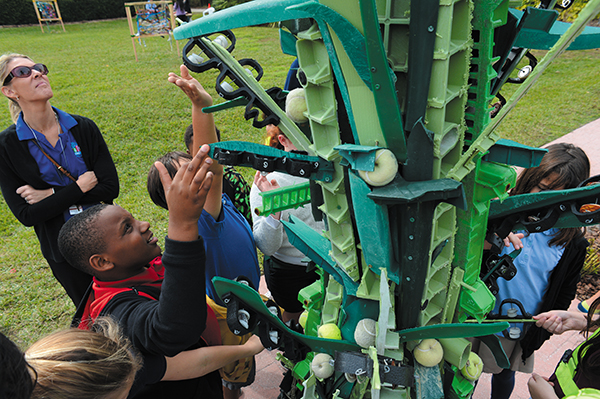 “Washed Ashore” opened Dec. 2 and will run through early June at Mounts Botanical Garden.
“It’s our longest exhibit,” Wolberg says. “It’s been fun for us. It’s made us think outside the garden.”
Wolberg heard about “Washed Ashore: Art to Save the Sea” from Sandy Smith, who lives on Singer Island and is board chair of Friends of the Mounts Botanical Garden. Smith came across “Washed Ashore” when doing research and reached out to Wolberg.
“I’m a sailor. I’m on the water a lot, so this really spoke to me — this exhibit,” Smith says. “If this exhibit can awaken people to the pollution problem we have, I’ll be extremely happy. I love the anemone reef; it is what I see when I dive.” 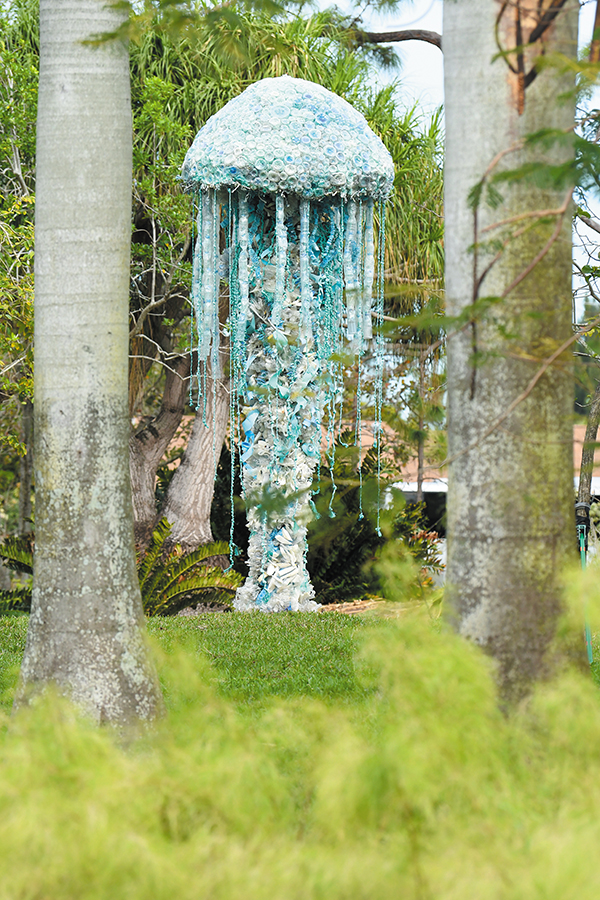 Pozzi hopes viewing the exhibit will prompt people to recycle more and use less plastic.
“Any action someone takes is a good thing,” Pozzi says. “It’s a wake-up call.”