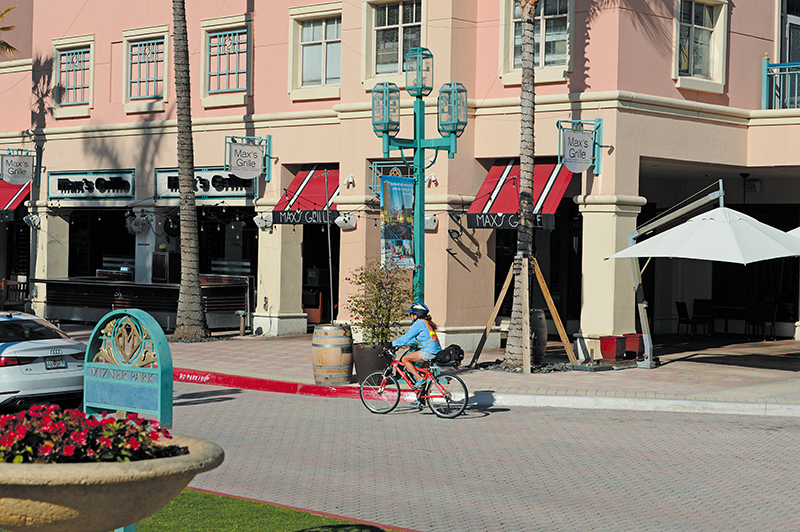 The typically bustling scene at Max’s Grille is just a backdrop for a single bicyclist in Boca Raton’s Mizner Park. Max’s closed in reaction to the coronavirus threat. Jerry Lower/The Coastal Star

At the start of this year, Florida’s economy was humming and the state’s unemployment rate had dropped to an all-time low of 2.8%. Hotels and restaurants reported a strong tourism season.

By mid-March, COVID-19 had turned all that on its head.

As customers retreated to their homes and with anchor stores like Macy’s and Nordstrom closing, the Town Center mall in Boca Raton, The Gardens Mall in Palm Beach Gardens and the Mall at Wellington Green shuttered.

County restaurants tumbled like dominoes after Gov. Ron DeSantis on March 20 ordered them to close on-premises dining. But many tried to grab hold of the one lifeline he held out, allowing them to offer meal delivery and takeout service.

The impact of these and other closures across the state and nation was felt quickly, with job losses mounting by the day.

Nationally, 3.3 million people filed unemployment claims during the week ending March 21, according to U.S. Department of Labor data. In Florida, 74,021 people filed for unemployment, up from 6,463 the previous week.

But the national and state numbers do not show the full picture. Many more people tried to file but failed because the avalanche of claims overwhelmed unemployment systems.

“This is the worst I have ever seen,” Peter Ricci, director of Florida Atlantic University’s hospitality and tourism management program, said of the impact on business and the economy.

“The impact was immediate and disastrous on hotel workers and restaurant workers,” Ricci said. “The effect on Florida is also disastrous because we rely so much on visitors. It has impacted our tax collections gravely.”

“It is an economic crisis,” said Troy McLellan, president and CEO of the Greater Boca Raton Chamber of Commerce. “We are throwing a health crisis on top of that. This is exponentially worse.

“9/11 was a one-time event. You’re able to recover,” he said. “We can’t recover because we don’t know what the damage is. Right now, we are living day to day without knowing the end to this.”

The situation is so unprecedented that “there is no playbook for this,” McLellan said.

“We were having a very good year. We were hitting all our key performance measures” through February, he said.

And then it all crashed.

“We have been putting all advertising on hold. No one wants to know how great your property is,” Jergensen said. “It is something we have never seen before. We really don’t know when it will stop and flatten and turn around.”

FAU’s Ricci said that if the crisis abates in six weeks, Palm Beach County will be able to rebound this year.

“Six weeks is the breaking point,” he said. “If we go beyond that, we are in for a rough ride for multiple years.”

As the number of COVID-19 cases increases exponentially in Florida and the nation, the likelihood of a fairly quick recovery grows dimmer by the day. Business groups are bracing for the worst and have pleaded for a massive bailout.

Congress approved a historic $2 trillion stimulus bill on March 27, but it was unclear if money will come quickly enough to stave off disaster for many businesses.

“The coronavirus epidemic is the greatest crisis our industry has ever faced,” the National Restaurant Association said on its website.

It estimates that restaurants and the food service industry could lose $225 billion and eliminate up to 7 million jobs over the next three months.

A March 17 analysis by the U.S. Travel Association projects that decreased travel will inflict an $809 billion hit on the U.S. economy and eliminate 4.6 million travel-related jobs in the United States this year.

The picture is no brighter for hotels. The American Hotel and Lodging Association estimates nearly 3.9 million total jobs either have been or will be lost in the next few weeks. Since mid-February, U.S. hotels have lost $2.4 billion in room revenue.

The restrictions on restaurants have inflicted pain across Palm Beach County. While many are trying the take-away model, they say it brings in only 10% to 20% of their normal revenue.

They don’t know how they can sustain that if the pandemic is not brought under control soon.

The Death or Glory bar and restaurant at 116 NE Sixth Ave. in Delray Beach closed voluntarily on March 17 for at least 30 days and laid off about 25 employees.

“We had noticed how bad this could get if people don’t quarantine,” said co-owner Annie Blake. “We thought it was the prudent thing to do.”

She is now trying to bring in some revenue with take-away. Customers pay online in advance and pick up their packages without contact with employees.

While Blake laid off employees to allow them to collect unemployment, she tried to soften the blow by giving each $1,000 to help them pay living expenses.

“They were understandably nervous to be out of work, but they thought, as do we, the better we can contain this, the sooner we can get back to work,” she said.

Luke Therien, whose family owns Prime Catch and Banana Boat in Boynton Beach, temporarily closed his Intracoastal waterfront restaurants on March 18 and laid off about 250 employees.

“There’s a lot of good people who will be out of work for a while. That is very concerning,” he said. “A lot of our employees are family people. … They are all worried about this [virus]. There comes a point where safety was more important. It was definitely time.”

But Therien is not trying to retool as a take-away business because it would take a lot of work for very little financial reward.

“People want to enjoy their experiences at the restaurant,” he said. “They want the best, the freshest food. … It is not food meant to be tasted 25 minutes later.”

Customers would likely say, “This doesn’t taste the way it did two weeks ago when I was sitting with an icy margarita,” he said. “We don’t want that kind of perception.”

While some hotels are closing, others are struggling to find a way to stay in business.

Cathy Balestriere, general manager of Crane’s Beach House in Delray Beach, has adjusted and readjusted operations as the business environment has changed.

She has pivoted from the leisure market to extended-stay guests, perhaps those who have nowhere else to go, or planned a cruise only to find out cruise sailings have been canceled, or don’t want to return to a place with rampant infection rates.

All of the 28 rooms in her privately owned boutique hotel, located between the ocean and Intracoastal Waterway at 82 Gleason St., have full kitchens, which makes the idea feasible. The pool remains open, with lounge chairs spaced far apart. Staffers sanitize the hotel hourly, and hand washing and hand sanitizer stations are located throughout the hotel.

Guests have no contact with staff, and check in by phone. Guests choose the time they want housekeeping services, or can forgo them and ask for towels and sheets to be dropped off outside the room.

And although hotel rooms go for more than $400 a night in her area, Balestriere has dropped the price to $129.

As of March 20, 18 rooms had guests, a far better occupancy rate than the 15% or less elsewhere in the county.

“People are reading a book, sitting by the pool. They feel comfortable and safe,” she said. “Seeing people relax made us feel good.”

One of Balestriere’s goals is to not lay off her 23-person staff.

A Palm Beach County emergency order effective March 26 requires hotels not to accept new reservations from anyone who is not a “critical lodger.” These include health care professionals, first responders, law enforcement, airline crew members and patients’ families.

But it also allows for displaced residents or visitors and people who are temporarily unable to live in their homes, which seems to include the guests Balestriere is seeking.

“We feel we will be closed for at least six weeks,” he said. “If we can open sooner, that would be the best news ever.”

The nearly 600 full-time and part-time staff members will be paid 80% of their salaries and retain health insurance for six weeks.

While other hotels might be able to tweak their operations, a five-star resort “is all about service delivery, and we weren’t able to reinvent our business model,” Gold said.

COVID-19’s financial impact is a wide one, and those affected include nonprofits.

Boca Helping Hands canceled its April 18 Monopoly Event and Casino Night fundraiser due to limitations on events that would draw large crowds.

The charity, which provides food, medical and financial assistance, expected the fundraiser would bring in as much as $300,000, or 10% of its budget.

Instead, Executive Director Greg Hazle would like to schedule a virtual event like a silent auction to make up some of that lost revenue.

Hazle hopes supporters will understand that they will be asked to do more at this time. But he also realizes the stock market plunge might curtail giving.

The coronavirus has caused additional disruptions. Volunteers who felt they were susceptible to infection backed away. But Hazle said others were willing to step up.

“We are taking advantage of people’s willingness, and obviously people have a little more time on their hands,” he said.

He also has changed how Boca Helping Hands distributes free meals at a feeding center. Because of the need for social distancing and efforts to eliminate crowds, the nonprofit is operating a drive-thru where meals are given out. The same goes for distribution of food pantry bags.

“We may not be a first responder. But I guess we are a next responder, responding to the folks who are losing their jobs and income,” Hazle said. “It feels to us we are an important part of the response community.”

Another casualty of the coronavirus was the March 14 Bethesda Ball at The Breakers, Bethesda Hospital’s biggest annual fundraiser. It was expected to raise more than $600,000 for upgrades to the emergency room, registration areas and the women’s center, among other projects.

“We take the health of our community very seriously, and it was the right thing to do for our community,” said Barbara James, executive director of the Bethesda Hospital Foundation.

But many Bethesda Ball sponsors volunteered to help. “We have been blessed that many have said, ‘Keep our sponsorship money.’ That is taking a little bit of the ouch out,” James said.

She hopes the foundation will end up with at least $200,000, and she will look for other ways to raise funds.

“This is a generous community that knows having preeminent health care in their backyard is important, and it is especially needed at a time like this,” she said.