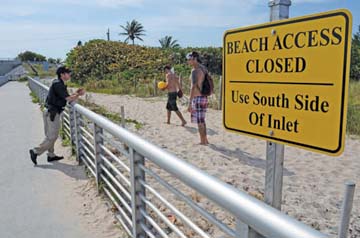 For four days in April, the golden sand to the north of the Boynton Inlet was off limits to the public. This made some people happy, but made many others fuming mad. And although some agencies agreed on how to proceed, others waved flags of warning. As a result, the access was re-opened one day before a scheduled media event to discuss “new public safety signage” at the inlet. So how did this boondoggle occur?

Was the northern access closed because the inlet’s refurbished sand-transfer plant is more dangerous than it was before? Did it happen because more people are using the north side of the jetty when the guarded south side fills up? Did it happen as a way to satisfy those Manalapan residents who complain of bad behavior displayed on their beach? Or maybe it happened as a way for the county to sell a need for additional parking spaces at Inlet Park to the residents of Ocean Ridge.

Who knows? Maybe it’s simply the byproduct of an improving economy bringing more and more residents to our area, and subsequently more and more to our beaches.

I suspect those who acted to close the access were influenced a bit by of all these things.

This not an isolated situation: Many of these same issues will be discussed at an Ocean Ridge town meeting on May 6. In this instance, it’s about the public beach access at the end of Beachway Drive just across the Woolbright Road Bridge. An increase in population across the bridge is causing concern for a handful of residents who live near that beach access point.

And what’s the sales pitch to companies who might want to expand or relocate to this area? Surely, it’s not that their employees can easily spend a day at the beach, because that’s becoming harder and harder to do.

With “Dog Beach” long gone — and that area rumored to soon become luxury townhomes with private beach access — there will be even more public pressure to access the remaining “public” beaches, even where they don’t provide parking or facilities.