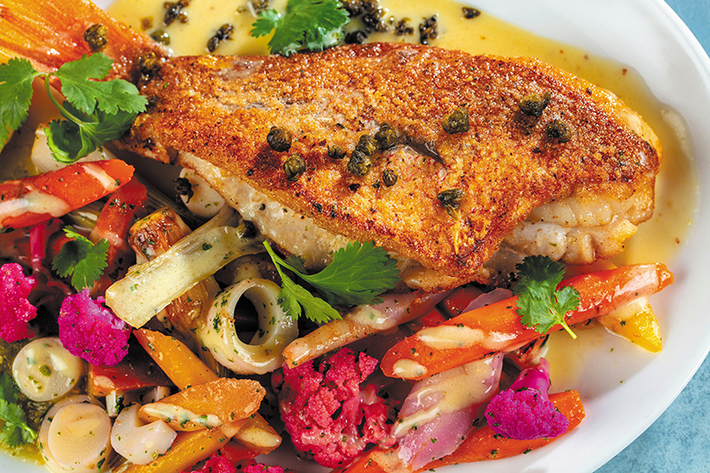 Butterfly snapper is one of the dishes offered at Benny’s on the Beach Oceanwalk in Lake Worth Beach. Photo provided

Have you checked your dining check lately? In the past few months, diners may have noticed a service charge added to their bills, typically 18%.
That’s an automatic tip for what chef Jeremy Hanlon of Benny’s on the Beach at Lake Worth calls “support staff.” It’s a guaranteed amount for each table. Diners have the option of tipping more if they choose, and many do, Hanlon said.
Hanlon says all of the fee goes to people who serve, bus tables or tend bar. “If a server doesn’t make their numbers for whatever reason, the others that are tipped out from their tables aren’t losing out.”
At most restaurants, the fee used to appear only on checks for parties of eight or more. It’s now showing up on every check in many restaurants in Palm Beach County.
“This isn’t something new,” Hanlon said. “Miami’s been doing it forever. New York, other cities — it’s always there. I think diners are beginning to accept it.”
Service fees are but one way restaurant owners say they are coping with skyrocketing food costs, increased rent, and especially rising labor costs that are mandated by Florida law.

“It’s a tough business right now. I ran the numbers,” said Gary Rack. “The minimum wage increase over the next five years will cost hundreds of thousands of dollars. That’s labor alone for our three restaurants. And I’m just a small chain. It’s going to hurt a lot of smaller full-serve restaurants.”
Rack, CEO of the GR Restaurant Group, runs Rack’s Farmhouse Kitchen in Boca Raton, and a Rack’s Farmhouse and Rack’s Fish House in Delray Beach.
He said it’s not only labor but food costs that have driven menu increases as well. “The consumer eventually is going to say, ‘I can’t go out.’ We’re a scratch kitchen. We use quality ingredients. But they’ve gotten out of control.”
One of the best sellers on the menu at Farmhouse is a cauliflower flatbread. He uses a lot of the fresh vegetable weekly.
“Two weeks ago, cauliflower was $95 a case — it used to be $45. Food costs are brutal,” Rack said. “Romaine lettuce was so expensive, we quit serving Caesar salads for a couple days because we couldn’t afford to put the salad on the plate to make any money. Now, romaine has come down, but every day it’s something. It’s completely out of control.”
George Patti, owner of M.E.A.T. in Boca Raton, said he’s back in the kitchen in his restaurants because of a labor shortage. “I put myself back on the daily schedule,” he said.
It’s a crisis for hospitality, he said, one that started during the pandemic and shows no signs of letting up. Not only a lack of workers, but responsible workers: “ones who show up.”
“It’s a younger generation. They don’t want to work. Silly kids. They want to play on their phone and make money. And guess what? They do. They stay at home and do TikTok or YouTube videos and make more than at a real job.”
Patti also cites food delivery costs as well as the fluctuating prices of the food itself, such as chicken wings — $185 for a 40-pound case a while back, then dropped to $80, but soon to rise again with the Super Bowl around the corner.
“We can’t sacrifice quality. Meat is our name,” Patti said. “But there’s no predicting costs. A 20-pound box of tomatoes is $64; it used to be $25. It’s crazy.”
To keep menu prices reasonable and within diners’ perceptions of fair value, he’s working in the kitchen, he said, and has signed up “with every delivery platform out there.”
Takeout and delivery reduce meal costs where labor is concerned, though he has a dedicated person in the small eatery to handle all the takeout orders and deliveries.
He’s adjusted again and found a niche in office deliveries and party catering. “We’ll do $400 deliveries at lunch to offices,” Patti said. “It’s definitely helped. We’re just trying to make it.”
Chef/owner Jimmy Everett of Driftwood, an 80-seat restaurant in Boynton Beach, has been trying for the last year “to figure things out. Things are changing all the time.
“It used to be there were industry standards that typically worked,” he said. “There was a good way to make a sustainable profit. You knew that a 28-to-30% food cost was good. Now, a 25% cost is what it takes to just survive. Labor is 50%. That’s terrible. We’re trying to figure out how to balance it all out. There’s no rulebook for this.”
Driftwood makes meals from scratch. Food costs are unpredictable, though a flexible daily menu helps, he said. It’s easier for him to adjust with a small restaurant.
But there’s a line when it comes to charging the diner more. “In a matter of less than a week our cost of cauliflower went from $45 to over $100. I can’t charge $22 for a Buffalo cauliflower app. Either we take it off the menu or we replace it with something,” Everett said.
Hidden costs that go into a meal, nonfood items such as appliance servicing and cleaning products and even ink and paper for printing daily menus, are straining budgets as well. “These are the things the diner doesn’t see,” Everett said.
But, he said, “My biggest concern is what’s happening with the minimum wage law changes. It will have a huge impact on every single full-service restaurant and the front of the house who serves their products.”
Florida’s law raises minimum wage to $15 for tipped workers over the next five years. That’s a dollar-an-hour increase each year for five years.
“All of my wait staff make more money than I do,” Everett said. “I’m fine with that. I know a lot of others won’t be.”
How to deal with it “will be a huge hurdle when it all plays out. I don’t have an answer.”
A service charge on the check is one thing he is considering, but it’s part of a dilemma pitted against raising menu prices.
“If we change our tip structure, that can cause issues with our customers. Or the wait staff. The crowd we have, sure they look at prices, but people here come in for more than a plate of food to fill their stomachs. It’s an experience.”
Either way, higher menu prices or a service charge, he thinks people will figure it out. “At the end of the day, they’ll say, ‘I spent this much at this place and it was this much, and I spent the same amount at this place with a service charge.’”
For Everett, “it’s making sure we’re being honest. I want it to be fair. I want people to feel like they’re getting value, whether they’re spending $20 or $200.”
He’s preparing for the possibility that diners will eat out less frequently. He can’t say it’s happening yet, though he’s observed that crowds may be thinner. Sales numbers are equal to last year’s, however.
Driftwood opened only two years before the pandemic, so Everett can’t compare sales records for years back.
“We’re constantly assessing everything, every day,” he said.

Benny’s goes to land
Benny’s on the Beach has expanded into the Lake Worth Casino plaza, taking over the spot of its former sister restaurant Viva La Playa.
Called Benny’s on the Beach Oceanwalk, the 200-seat seafood restaurant and bar is an adjunct to the original on the Lake Worth Beach pier.
“We’ve redone the interior, provided a slightly modernized atmosphere,” Hanlon said. “It will drive the beachside vibe all along the beach. But it’s Benny’s menu, with a few tweaks from my travels.”
While Viva La Playa had a “specialness” to it, he said, “we felt it was taking the focus away from Benny’s. We wanted to put all our eggs in one basket as a brand.”
The menu is all of Benny’s favorites, plus steak, more taco dishes, and some new style dishes Hanlon has concocted from traditional seafood dishes.
“We’ll have different flavor combos,” he said, representing his international cooking techniques and incorporating favorite flavors.
It is open for lunch and dinner, with reservations for dinner only at the moment. Breakfast is served on weekends starting at 10 a.m., but that may expand in season, he said.
Benny’s on the Beach Oceanwalk, 10 S. Ocean Blvd., Lake Worth Beach. Open daily for lunch and dinner, breakfast Saturdays and Sundays. www.Bennysonthebeach.com.
In brief: According to a post on the Facebook page of the old Ellie’s ’50s Diner in Delray Beach, the owners of Bees Knees Diner of West Palm Beach are set to take over at Ellie’s, which closed in 2022. Stay tuned.