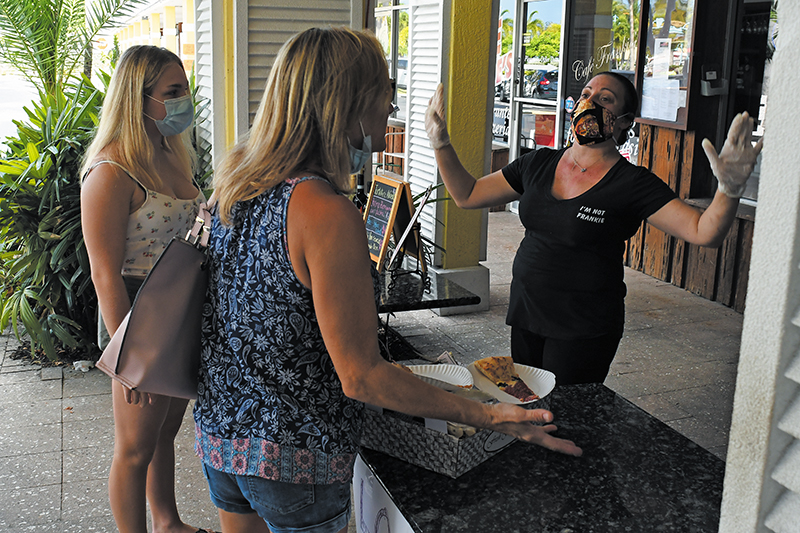 Customers expecting to pay for meals at Cafe Frankie’s in Boynton Beach watch Dena Balka insist the food is free. She and other employees handed out dozens of meals for a few hours on May 6 after one of the regular patrons gifted them with enough money to ‘feed the needy.’Photos by Jerry Lower/The Coastal Star

For most restaurants, the start of the state’s reopening is at least some relief from what Luke Therien calls “the most difficult” time he’s faced as a restaurateur.

His family has owned Boynton Beach’s Banana Boat for 41 years, and Prime Catch for 16.

Hurricanes, construction and other setbacks don’t compare to the loss of business that COVID-19 and the state’s subsequent shutdown have caused the hospitality industry, he said.

“Nobody’s seen anything like it,” he said. “But we’ll get through it.”

Now they’re gradually coming back after the governor started lifting closures. With Phase 2 implemented after a week of Phase 1 soft openings, most restaurants are reopened, including favorites such as John G’s and Johnnie Brown’s.

Restaurateurs have different approaches to comply with the Centers for Disease Control and Prevention sanitation rules and stipulations for occupancy. However, none can predict what the new business model will look like completely.

Most have reconfigured dining room seating, spacing out tables, and dedicating workers to clean and sanitize spaces in between guests’ arrivals. Todd Herbst of the Big Time Restaurant Group, owner of Elisabetta’s, Louie Bossi’s and Rocco’s Tacos in Delray Beach and Boca Raton, says through it all, they’ve taken it one day at a time. The restaurants moved out tables and roped some off. Bar areas are off limits to patrons except to walk up and order a drink to take to a seat elsewhere, or else servers can bring the drinks to diners. The social-distancing rule of 6 feet applies throughout.

“No one is allowed to stand or sit at the bar,” Herbst said.

The outdoor seating can make up for it: There is no limit to outdoor capacity as long as it’s spaced according to guidelines. “We’re lucky in some regards. Louie Bossi’s in Boca has a large exterior, and Lisabetta’s has two floors of outdoor space,” Herbst said. “Rocco’s downtown Delray has some. That’s still not a hell of a lot of seats.”

Vaughan Dugan, co-owner of Kapow! and The Dubliner in Boca Raton’s Mizner Park, is excited about reopening. “The City Council has been great working with us, and they voted to close the street. We’ve got a tent coming with tables so we can set them six feet apart.

“We had to think outside the box. I think the creativity we’re seeing as the restaurants face the challenge is exciting.”
Dugan points to Death or Glory in Delray Beach. It is using blow-up dolls as seat placeholders to maintain the 6-foot separation inside the restaurant.

He saw another restaurant that solved the bar situation by pushing high-top tables for two up against the bar. “Technically, they’re at the bar, but at a table.” The tables prevent patrons from gathering at the bar.

Loyal bar customers at Kapow! are confused, Dugan said. “They come in to drink and we have to tell them they have to take it to a table. They’re a little lost — they don’t know what to do.”

His first week open at Kapow! was down only slightly from business during season, he said. “But it’s too soon to comment. We did all right despite having only three tables in the restaurant. We’re small inside anyway.”

He’s partnering with other chefs and restaurants, helping them out. For a pop-up in The Dubliner, the staff is using Troy’s BBQ from Boynton Beach to put barbecue ribs on the menu.

As for safety compliance, staffers wear masks and sanitizing “holsters” that have spray and hand sanitizer; menus are disposable paper that are tossed after every use.

“We just had a staff meeting to teach them how we’ll be doing things: how to change gloves properly, sanitize tables and wash hands.

“But we explained why we’re doing it more than anything. It’s for the safety of our guests and our staff,” Dugan said.

The company purchased UV wands to sanitize tables, and installed hand-sanitizing stations through the restaurants and at doors. “There will be temperature checks of staff as well,” he said.

They seat at every other table rather than remove tables.

“The extra tables will act as barriers, and it’s nicer to have a lot of tables in the restaurant,” Sobel said.

For now the two restaurants set tables on demand, taking only customers with reservations. Diners will no longer see tableware such as salt and pepper and other dispensers that would be reused. “Everything is going to be brought out, and cleaned in between usage,” Sobel said. 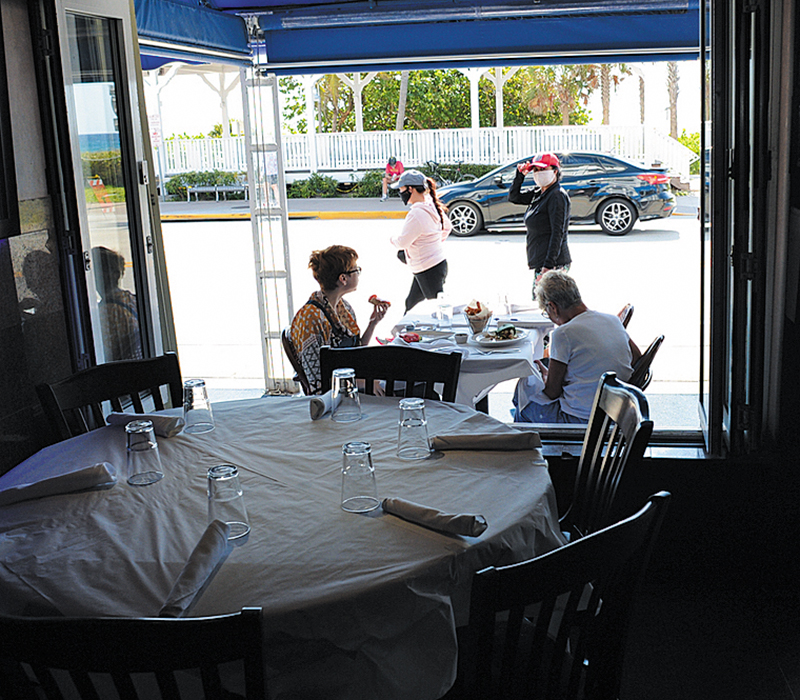 Ren Kuikahi and Pam Edwards enjoy breakfast at Caffe Luna Rosa in Delray Beach on May 12. The restaurant employed social distancing with more space than usual between tables and most patrons sitting outdoors.

“They are amazing. You can tell the difference in the air immediately,” she said. Several of her staffers have asthma and can’t wear masks, so she’s using the machines, sanitation stations and a revamped dish station that has sanitizer at every stop. Each restaurant also has plenty of outdoor seating.

She’s schooled her staffers in sanitation and told them that reopening is all about creating jobs, not making money. “We’re a business, of course, and we want to make money, but we want people to have jobs, too. To get back to work. That’s the most important thing right now.” Therien is watching it all unfold, too. He opened Banana Boat during Phase 1, but Prime Catch remains closed until the end of May. It has to do with parking lot construction and not the virus.

“There’s no place to park,” he said. “It’s literally impossible.”

Diners would have to park too far away and get through a construction zone to make it to the waterfront restaurant.

“If the parking lot had been done, we’d have opened. Over half of our seating there is outside.

“Our staff is ready, and anxious. Since we reopened Banana Boat, we haven’t lost any staff.”

Benny’s on the Beach management brought back its staff of 90 members. Benny’s partner Max Lipton said they could be needed soon, since the city of Lake Worth Beach has worked with Benny’s to reconfigure more seating space outdoors, both on the east and west ends. Benny’s sits on the entrance to Lake Worth Pier.

It turned the bar area into table seating since no bar patrons can congregate there.

Benny’s is open for breakfast and is one of the few around with outdoor seating waterfront.

“We are hoping and praying we’re one of the first beacons of hope for everybody,” Lipton said. “We’re anticipating we might get a pretty decent surge of business. We want everybody to be safe and comfortable but we want to do as much business as possible.”
Over at Driftwood in Boynton Beach, Jimmy Everett said reopening to diners coming in to eat was another adjustment after he did so much take-out.

“There were longer wait times than we wanted, trying to get the food out for take-out and to the tables,” he said. “But everyone was just so glad to be out, they were respectful and understanding.” Take-out will still be part of the new model, he said. Customers have come to expect it. “We make adjustments daily. We’re able to sustain this for the time being,” Everett said.

Now he’s seating guests in every other booth and has added outdoor tables.

“I’m not going to be putting in partitions between booths or anything like that,” he said.

“You can’t kick someone out of the restaurant if they cough. We definitely plan on having signs and letting people know if anything they do is making others uncomfortable, they’ll be asked to leave.

“But I’m nervous about that, too. It’s a concern. You don’t want to open your doors if we have to be kicking people out if they’re disrespectful.”

All in all, Everett said, beyond the guidelines set forth, it’s all new territory for restaurants. “There’s not a right or wrong way, we’re just adapting and doing the best we can based on new information.”

He says he’s somewhat worried it’s too soon to reopen, despite attempts to keep non-essential traffic out of the restaurant and sanitizing beyond specifications.

He thinks opening too soon, then facing another shutdown could be worse than the initial closures. “It’s very important that it is responsible to reopen, and this doesn’t happen again.”

Herbst is optimistic things will rebound in time. How much time, he doesn’t know.

“We know we will get through it. The country’s been through a lot — wars, depressions — the world has been through it all. It’s just a time frame. How long before we get to the other side, who knows? I like to quote Churchill: ‘When you’re going through hell, keep going.’

“The quicker, the better.”