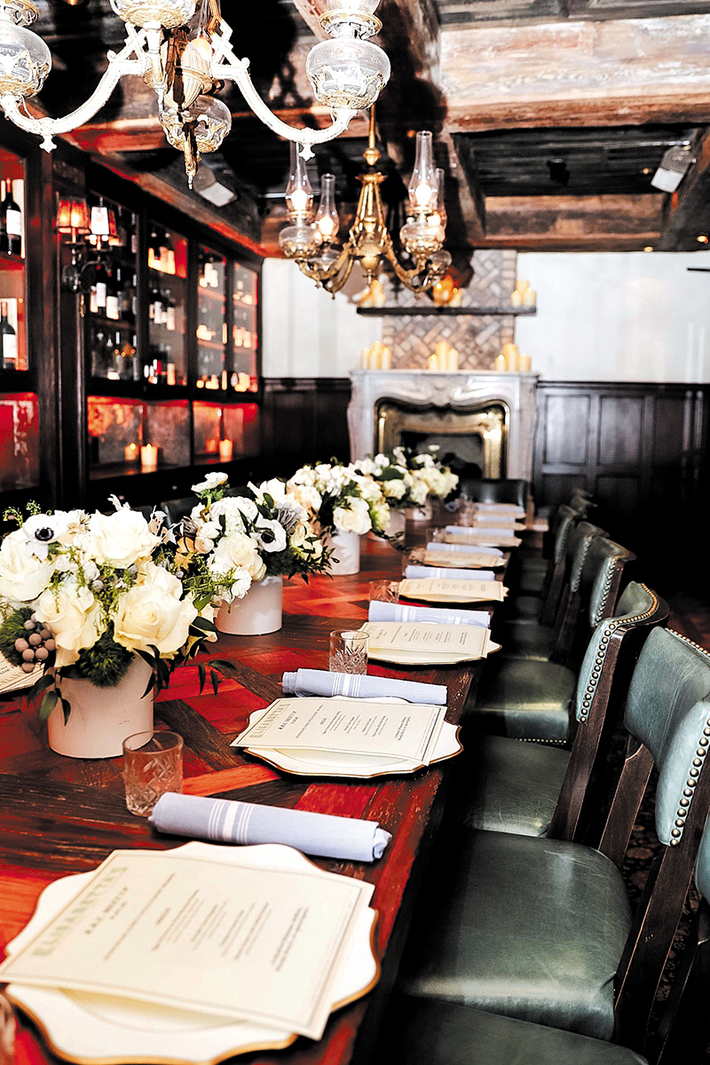 Elisabetta’s Ristorante in Delray Beach has a private room that accommodates up to 20 customers. Photo provided

It’s party season, and party checklists usually start with a room to rent. Many restaurants and hotels rent spaces for hosting various-sized groups, with food provided or allowing food to be catered.
Some smaller restaurants allow for a “buyout” — rent out the whole dining room for a party.
Some tips as you plan:
• Have alternate dates in mind, especially around the holidays. Think outside the dinner hour as well: Brunches and even “holiday PJ” breakfasts are ideas.
• Don’t assume anything. Get your event spelled out in writing.
Here are some worth a look.
Kapow! expanded and rebuilt across the street in Boca Raton’s Mizner Park and now has a few party options, including an outdoor “opium garden” and three private karaoke rooms with automated AV systems. These rooms can connect to make larger spaces as well as open onto the patio. Food is modern and traditional Asian cuisine, with sushi a favorite. Contact the restaurant via www.kapownoodlebar.com.
Farmer’s Table in Boca Raton has several rooms for rent, including the newly renovated Oak Room that accommodates 100 for a sit-down dinner, or 150 for cocktails. Other rooms and spaces indoors and out, including a pavilion overlooking the pool, seat from 30 to 140. Contact www.dinefarmerstable.com.
Max’s Grille, a staple in Mizner Park, has a room suitable for a 12-person sit-down. Noted wine list and contemporary American grill fare are offered. Contact www.maxsgrille.com.
History, architecture and signature menu items come together at The Addison in Boca Raton. The 1920s landmark building named for its architect Addison Mizner has 10-plus rooms that accommodate intimate dinners for 12, up to 300 for a large party. It is frequently a site for weddings (and proposals) and has indoor and outdoor spaces available. Contact www.theaddisonofbocaraton.com.
The Pavilion Grille in Boca Raton has a large, open atrium for big parties — up to 300 for sit-downs, and a smaller room for up to 60. A variety of menu choices catering to each party is provided. Contact paviliongrille.com.
At Eclectic Eats in Delray Beach, indoor space accommodating 35 is available, and a lush garden setting can handle up to 125 people. Catered menus for a variety of parties and gatherings are available, or guests can arrange to bring their own foods. Contact www.eclecticeats.com.
The Wine Room Kitchen and Bar on Atlantic Avenue has a private room that seats up to 14. It is especially good for oenophiles, with wine and food pairings a natural here. Contact www.thewineroomonline.com/delray-beach.
Elisabetta’s Ristorante, also on the avenue, has a private area with a fireplace, great for those chilly evenings. It holds up to 20 people; the menu is modern Italian. House specialty is house-made pasta. Contact www.elisabettas.com.
Salt7 in Delray Beach has a private room opening to a patio suitable for up to 50 people for a sit-down affair, or 100 for cocktails. It has a trendy vibe and award-winning chef. Contact salt7.com.
La Cigale in Delray Beach has several private rooms that can accommodate from 10 to 100 diners. Rooms are available from 8 a.m. daily, so breakfast, brunch and luncheons are possible, along with cocktail parties or dinners. Contact www.lacigaledelray.com.
At the Ray Hotel Delray Beach, in Pineapple Grove, the Ember Grill has a private room to seat up to 40. Also available are the Rosewater Rooftop and the Garden at Rosewater, both outdoor venues with variable seating. Contact www.therayhotel.com.
The Opal Grand Resort, oceanside in Delray Beach, has several venues, including a ballroom as well as the main dining room area, Drift. Seafood is Drift’s focus.
Contact www.opalcollection.com/opal-grand.
Benvenuto Restaurant & Banquet Facility is a European-themed event space in Boynton Beach, with several rooms and a large courtyard that accommodate from 30 to 250. Numerous rooms and configurations with courtyards or lounges adjoining are available. Foods are upscale American and Italian. It’s one of the oldest event spaces in the area. Contact www.benvenutorestaurant.com.
Baciami Italiano & Prime Steakhouse on South Federal Highway in Boynton Beach has a private room with capacity of 30 for dinner. Contact www.baciamiitaliano.com. 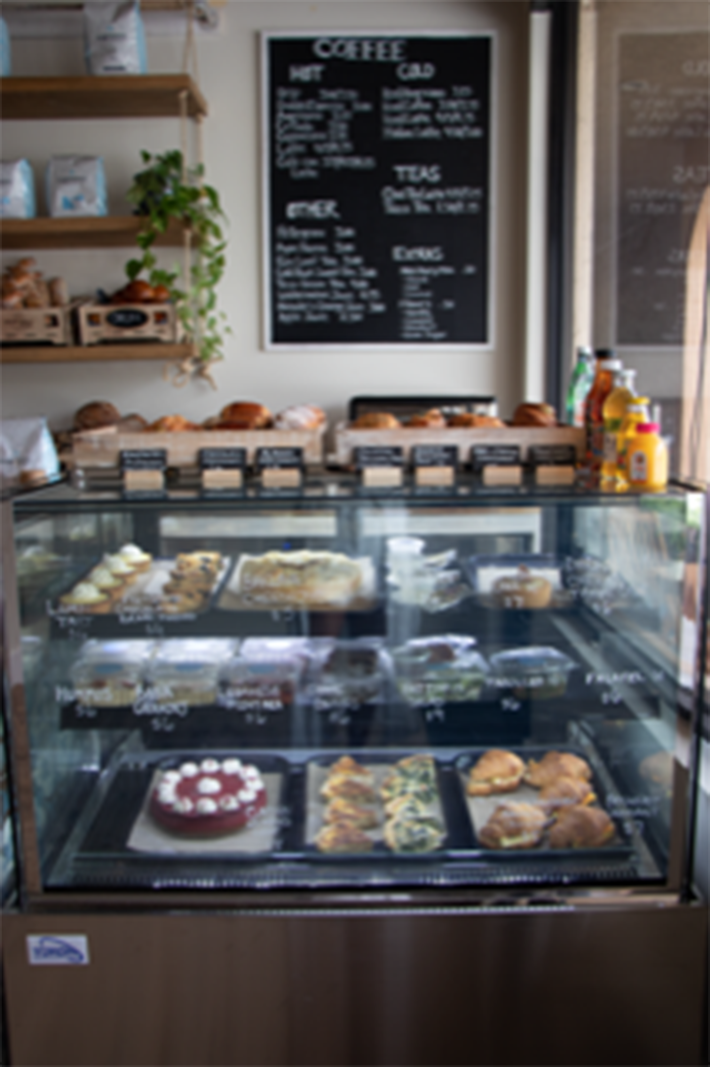 Another Amar bakery opens in Delray Beach
A new bakery and market is on Atlantic Avenue, created by the owners of Amar Mediterranean Bistro. It’s just a few doors down, and carries house-made European and Middle Eastern pastries, custom cakes, breads and more.
At Amar Bakery & Market, patrons will find a mix of croissants, falafel and baklava. Owners Nicolas and Susanna Kurban bring modern twists to their native Lebanese sweets and European pastries and breads.
This is their second location; their main bakery is in Boynton Beach.
“We planned the Delray one first, before COVID,” Nicolas said. They soon realized there was not enough space in the bistro to handle the bakery production.
“We looked around, and found an existing bakery for sale in Boynton, and we took it over,” he said. They’ve now doubled their space there to 2,000 square feet.
All the baking is done there, and delivered by 6 a.m. to the Atlantic Avenue location. They also deliver to restaurants and caterers who buy from them.
Susanna uses spices and flavor profiles that set these goods apart: Za’atar, an earthy, savory spice combination, and haloumi, a tangy goat-sheep milk’s cheese, are baked into croissants.
Brownies also get the Middle Eastern treatment. Halva, a sweet candy treat similar to nut butter, pairs with chocolate to create American-style brownies.
Vegan muffins and cakes and gluten-free items are available.
Grab-and-go items from the bistro are in the bakery for takeout, Nicolas said, including baba ganouj, tabbouleh and sandwiches.
“We plan on opening more bakeries like the Delray cafe, one in Boca, one in Palm Beach, and other places,” he said. “We’ll continue production in Boynton, and deliver to them, like a Starbucks — they can go in small spaces.”
Amar Bakery & Market is at 526 E. Atlantic Ave, Delray Beach. Phone 561-819-9020 or visit www.amar-bakery.com.

Lake Worth bakery is a swift start-up
Lake Worth Beach also has a new bakery: Azra Nahic opened Una Pastries and Desserts on Lake Avenue the first week in November. She called it a whirlwind start-up.
“When we got the place, it was all within a month,” she said. “We got the store and put everything in and I started baking right away.”
She’s had no formal training and never baked in a production kitchen before. She was working in the medical field but got tired of doing only paperwork.
“I started baking cookies and cakes, and people started ordering them,” said Nahic, who has Bosnian roots. Finally, she decided to open her own bakery at age 51.
Meanwhile, her children in Fort Myers were dealing with Hurricane Ian and wound up moving in with her and her husband, Armin Becirevic. “They were stuck here for two weeks while their power and water were out.”
Nahic is working long days at the bakery, along with a visiting cousin, doing everything by hand — even kneading dough for heavy bread loaves. “We have mixers for our cakes only. Everything else is done by hand,” she said.
Nahic bakes specialty desserts for a restaurant in Palm Beach, but they are pricey for the average buyer.
“I felt bad, nobody can afford the high-end, fancy desserts. Chocolate is so expensive now. Everything is so expensive. I wanted to make desserts and bake things people can buy and enjoy,” she said.
Her cases feature colorful macarons, cupcakes, cookies, muffins, brownies, breads, baguettes, tarts and Balkan favorites like kifli rolls.
One of the sold-out items each day is a flaky spinach and cheese turnover, borek, that’s a staple in the Balkan countries. It’s also made with meat and onion — the crowd favorite.
“Everybody has their own. But people come here for mine — I didn’t know there were so many people from our country here. I had a store full of people. I made 60 borek in three hours and was sold out. I love it — it makes me happy.”
But she can barely keep up.
“Every day, we’re sold out of some things by 3 p.m. Everything is made fresh, so anything left over, we give away to the homeless. I know what it’s like to be hungry,” she said.
She has plans to open other bakeries. But with such an exhausting pace, first she’s looking for professional help at the Lake Worth Beach store.
Nahic says her daughter Amela Agic does all of the bakery’s marketing and credits her for its success.
How do they plan to handle a second bakery?
“I can do anything,” Nahic says. “I survived war. I was in Bosnia for four years. You just have to be positive, happy, and don’t take things for granted.
“I’m tired. But it makes me feel good. I’m happy that we’re here. Food connects us.”
In mid-November she was awaiting permits for indoor and outdoor seating; the bakery is takeout only with no coffee available yet. “Soon,” she says.
Una Pastries and Desserts is at 513 Lake Ave., Lake Worth Beach. Open daily except Monday, 7 a.m. to 8 p.m. Phone 727-330-0401. On Facebook under UNA Bakery. Rappy is a service dog in training with Vets Helping Heroes. Photo provided

The restaurateur and the service dog
Dogs are so welcome at Burt Rapoport’s Deck 84 in Delray Beach they have their own pup menu. The owner is a dog lover and has supported pet charities with 20% of the money the pup menu earns at all three of his restaurants. The others are Max’s Grille and Burt and Max’s.
The Boca Raton-based charity Vets Helping Heroes, which supplies service dogs to veterans, approached the restaurateur to ask for support, and Rapoport readily agreed.
Overall, Vets Helping Heroes has received around $5,000 from the pup menus.
“They called one day, and said, ‘We appreciate what you’re doing. We have a new dog coming along, and we’d like to know if you’d like to name him in someone’s honor.’”
For Rapoport, the name was a “no-brainer.”
“My dad was a vet — and he loved dogs.”
So the new golden retriever being trained at Vets Helping Heroes has been dubbed Rappy.
“My dad’s nickname,” Rapoport said.