The beer-braised pork shank is a chef’s specialty at the recently reopened Ambassador Grill in The Ambassador hotel in Palm Beach. Photo provided

Welcome news for fans of The Ambassador in Palm Beach’s south end: The hotel reopened with a signature restaurant, the Ambassador Grill, featuring a large outdoor seating area to accommodate the protocols for COVID-19.

It’s billed as a “neighbor-hood” eatery with all-American fare. The team behind the 1947 hotel’s redo is the same one that brought the Brazilian Court around decades ago.

The executive chef, Juan Xavier Pareja, has a pedigree with noted restaurateurs Alain Ducasse at Benoit, and Andrew Carmellini at A Voce, which earned a Michelin star.

Both restaurants are in New York. 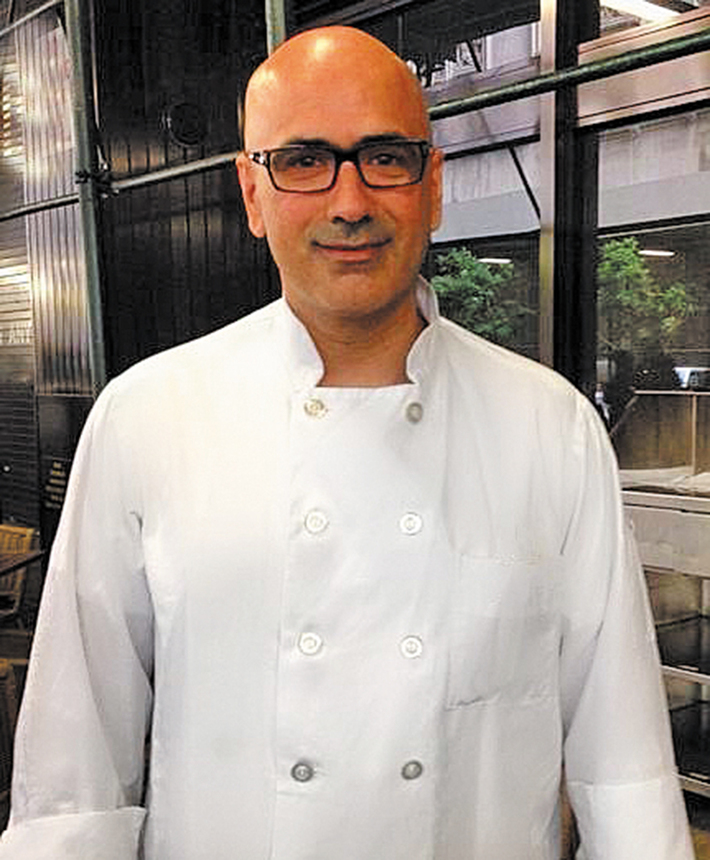 Pareja has designed a menu around regional U.S. favorites, such as cornbread-crusted oysters with a creamy remoulade from New Orleans, and hot, buttered Maine lobster on a brioche roll reminiscent of New England.

A California red oak grilled salmon with caper brown butter is from the wine country.

Salads and starters include a watermelon gazpacho with fried peanuts, and a barbecue mushroom flatbread.

A few casual items are on the list, including citrus-mojo chicken wings, and the “AAA Burger,” a double smash 6-ounce patty with cheese that aims to compete with other famous burgers made on the island.

Another of the chef’s specialties is the beer-braised pork shank, slow cooked, served with a polenta and bacon gremolata.

Chicken under a brick with a twice-cooked potato, and eggplant parmigiana with smoked mozzarella are among other choices on the dinner-only menu.

Bobby Schlesinger, CEO of the Ambassador group, said the group wanted to capitalize on the existing restaurant facilities, and make good use of the outdoor patio seating that will accommodate diners in the age of COVID-19.

Thus, the seating is socially distanced and safe, he said. Diners sit around an 8,000-square-foot covered pool deck that overlooks the Intracoastal Waterway.

Sunset is prime time, as the restaurant is open only for dinner, 5-10 p.m., Wednesday through Sunday.

The hotel is open to non-guests.

The Ambassador Grill at The Ambassador is at 2730 S. Ocean Blvd., Palm Beach. Reservations are suggested; takeout orders are welcome. Phone 561-473-9799 or visit www.ambassadorpb.com.

Back in the saddle

Welcome back to chef Bruce Feingold, formerly the longtime chef-daddy of Delray’s Dada. He’s now in charge of the stoves as executive chef at Farmer’s Table in Boca Raton after months of hiatus.

The restaurant in the Wyndham hotel co-owned by Joe Giannuzzi has the tagline: Feel Good Food.

“It was a perfect opportunity for me,” Feingold said. “I’ve known Joey for ages. We’ve both been around. Farmer’s Table is known for the quality of food, creativity and its healthy lifestyle. It’s just perfect for me.”

He said he’ll have things to learn, as well as things to add to an already healthy menu. The support he says he’s received will help him acclimate to the new environment and methods.

“The mantra here is ‘fresh, healthy, delicious,’” Feingold said. “It’s a vegan-style menu — no dairy, gluten-free, everything from scratch. It’s a good thing to learn for our own personal health. We evolve.”

Diners have returned to restaurants that have outdoor dining, and Farmer’s Table has a large courtyard that provides social distancing.

“People are getting out again,” Feingold said. “You can see them smiling — or at least their eyes glistening over their masks. They’re happy to be out.”

The restaurant does a good takeout business, and it has the adjoining Farmer’s Table Express, where customers can come in to the small market and pick up prepared foods or ingredients and whole meals that have cooking instructions on them. They’re popular, Feingold said, and provide a safe outlet for restaurant food in the coronavirus era.

He’s happy to be back behind a stove. “I’m excited. A new adventure for me, so it’s exciting. I got to be honest with you: There’s a phenomenal atmosphere here, and the food is great. I’m very happy.”

George Patti is as busy as ever, with the big move of his M.E.A.T. Eatery a few streets south in Boca Raton, and his venture into the meal delivery service.

M.E.A.T. moved out of the office building at Yamato Road on Federal Highway into the strip mall at 2831 N. Federal. It has the same menu as before with award-winning burgers the star, but pulled pork from the smoker and other sandwiches and craft brews are available as well. All condiments and sides are made in-house here.

“We saw a need, and decided to offer quality meals since there are people who are still not comfortable eating out. It’s grown from six to 20 households per week,” Patti said.

The meals cover diet plans such as keto, gluten-free, vegetarian and vegan, as well as traditional dinners.

Each box is enough for two meals, or one with leftovers; most orders are for five meals per week per person, he said.

The price varies, depending on the foods chosen, and the menus change weekly. They are listed at mealtago.com on Mondays, and orders are taken until 2 p.m. Friday.

Catering (delivery only at this point) is also offered, as well as bulk food items.

More information about Mealtago is available on the website.

Newcomer to the Avenue in Delray is Avalon Delray, a New York transplant. Slated to open on the corner of Northeast First Street and Atlantic Avenue by the end of February, the restaurant will feature a menu with a coastal spin on the modern steak and seafood house. It’s part of the Host Restaurants group. … The popular Elisabetta’s in Delray now has a sister restaurant open in downtown West Palm Beach on Flagler Drive at Banyan Boulevard. They share the same menu. . . . A new chef has taken the stoves at Cafe Boulud in Palm Beach. Chef Dieter Samijn, former chef at Bar Boulud in New York City, is originally from Belgium, and he’s noted for his flair for charcuterie. His first menu is expected at Cafe Boulud in mid-February. Former chef Rick Mace moved over the bridge to open Tropical Smokehouse in West Palm Beach with another Boulud alum, Jason Lakow.