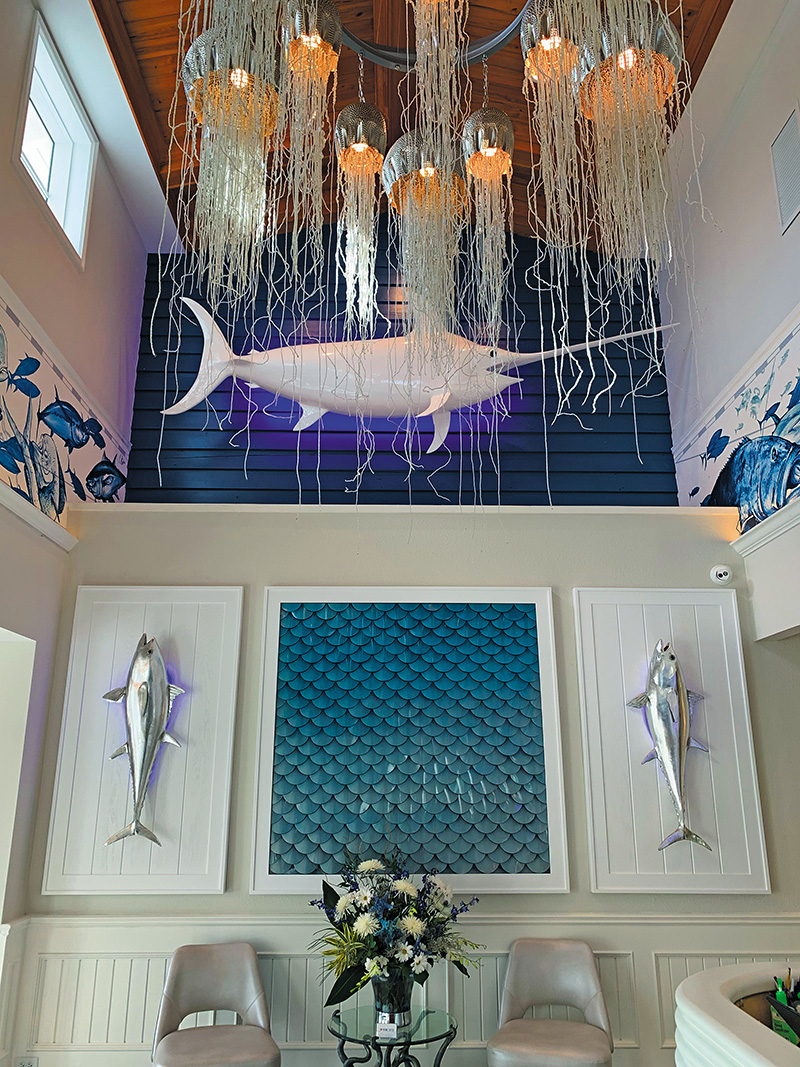 Phase 1 of the redo at Boynton Beach’s Prime Catch is complete, with a new dock, new decor, a new sign and some new menu items.

The doors opened Nov. 1 to the brighter and bigger space.

The owners, Luke, Pierre and Giles Therien, sons of the deceased founder John Therien, took advantage of the summertime slowdown and the ongoing plaza construction to jazz up the restaurant, which opened in 2004.

They rebuilt the dock, cutting its size slightly to accommodate what will be the 30-seat Prime Island Bar. The outdoor bar will have its own docks on the east side.

Manager Kim Edema said big boats are welcome. “We can accommodate three or four yachts at once at high tide.”

There’s a 6-foot draw, and most boaters are aware that things get iffy at low tide, she said.

“But we’re now ADA accessible on the docks. We used to have two steps up to the ramp but we eliminated those.”

The dining room is now a lighter and brighter white, with windows opened up onto the Intracoastal, and aqua and silver accents throughout.

There’s a sea theme with a touch of whimsy: In the upstairs bar and dining area, reconfigured for more seating and better views of the Intracoastal, giant blue octopuses crawl on the wall murals. Down below, tendrils that reflect the light hang from the jellyfish-shaped chandelier.

New menu items include appetizers such as a bianca flatbread, fried calamari and artichoke hearts served with a marinara and house-made white bean hummus.

The poke is a lunch favorite, she said, and is available separately.

Old favorites are still on the menu. Prime rib Wednesdays are from 4 p.m. till close; Mondays are Maine lobster nights.

Construction continues in the plaza, but owners are expecting the Prime Island Bar to be open by New Year’s Eve.

Prime Catch is at 700 E. Woolbright Road. Phone 561-737-8822; www.primecatchboynton.com. Open daily for lunch and dinner; on Sundays brunch is served.

Dada in Delray Beach is going strong as it approaches its 20th year in 2020. Co-owner Scott Frielich said much has changed since it opened in the historic Tarrimore house.

“Delray was a sleepy little beach town, and we were kind of off the beaten path. Odds were that we weren’t going to make it,” he said.

“Then Delray started really booming and everything kind of grew around us.”

He’s wary of so much development, however. “I feel there’s a little too much. It’s taken away from what we came here for. There were a lot of art galleries and mom and pop stores. Development kind of chased that away.”

Frielich has been approached to do more restaurants downtown: “I’m hesitant to open more locations. I think it’s reached a saturation.”

Instead, he’s focused on keeping Dada, the second-oldest restaurant downtown (City Oyster has it beat by a year or so), fresh and appealing for the diners.

A chef change is helping the menu move forward.

Chef Jessie Steele, a Delray Beach native, replaced Bruce Feingold at the helm in January and has brought some new items to the menu, while refreshing old favorites.

“I didn’t want to change the soul of the restaurant,” he said. “It’s an icon. But I kind of wanted to make my own stamp on it,” Steele said.

He has updated the popular mezze plate, adding muhammara, a Middle Eastern walnut dip, and restoring tabbouli to make it more Mediterranean.

“I changed up the tuna tartare. It’s now a seared tuna, but still served cold. Added a ponzu sauce, changed up the plating — we got rid of those ring molds. They’re so ’90s,” he said, laughing.

Roast duck breast replaces a half-duck, and diners can order it to any temperature.

One of the most popular appetizers stayed, too, with a nod to Spain. “I kept the Dada dates — I couldn’t take those off. They’re still wrapped in bacon and stuffed with chorizo. But I added a manchego cheese with marcona almond crema on top. They sit on a sherry vinegar gastrique.”

He didn’t touch the crabcake’s flavor profile, but took out the lavosh cracker filling and made it with more crab.

Another change is to the main dishes on the menu, where it followed the popular formula of a protein, starch and vegetable of the day.

“Now, each dish is composed with its own sides,” Steele said. “It’s a lot more work, but I think the customers appreciate it.”

He credits time cooking with chef Nick Morfogen at the former 32 East for his mentorship, but says Dada’s owners, Rodney Mayo and Frielich, want a Dada twist to everything, so he must unlearn some of the classics he was taught.

“With everything I change I have to do a full tasting with Scott and Rodney,” Steele said. “Rodney will say, ‘It’s good … but is it Dada?’ ” The chef laughed. “It forces you to be more creative.”

Steele added a smoker where he’s cooking smoked pork belly burnt ends. “The process is, we get whole bellies in and cure them, then smoke the whole belly. We take it out, cube it, and smoke it again to give it a heavy smoke. When it’s ordered, it’s fried, then tossed in a honey barbecue sauce. It’s been really popular.”

Steele also bought two deep fryers — for a variety of foods, but mainly house-made fries with his burgers, and the new fried chicken sandwich that debuted on the new Sunday brunch menu.

Dec. 1, brunch became permanent every Sunday instead of sporadically. The fried chicken sandwich, using the Freebird brand that Steele calls the best he’s ever eaten, also is served Sunday night — “since Chick-fil-A doesn’t serve on Sundays. We do. Till it’s sold out.”

To do it all, Steele helped build the new kitchen with all new appliances and tools. Not much could be done in the postage-stamp kitchen in the historic house. “I took out the wall between the hot line and the pantry. It opens up a little more room. We can move a little more.”

If your dream has been to open a small food business, the free entrepreneurship classes at the Secret Garden Culinary Business and Job Training Center can put you on the right path.

Eligible students can move from catering for friends to going pro, opening a restaurant or operating a food truck. Makers of homemade food can take the students’ juices, salsas, hot sauces, baked goods, jams, oils or even dog food products to the shelves to compete with big brands.

There are classes for wedding planners, musicians, food truck hopefuls, wholesale buyers and others in the hospitality business.
Graduate from the class, and the center will pay money toward your business license, and give you $150 toward a food manager’s license.

Classes meet at the center, 410 E. Boynton Beach Blvd., Boynton Beach, at 6 p.m. Monday and Thursday each week.
For information about the classes and to determine eligibility, call 561-386-4261.

In brief: Mizner Park is getting some new restaurants and spots for food. Lost Weekend, from the same owners as Kapow!, is coming next door to iPic Theater. Its original, a game room-lounge that serves handmade tacos, is in Miami Beach, and there’s another on Clematis Street in downtown West Palm.

Calaveras Cantina moves in, too; its other one is in Jupiter’s Harbourside Plaza.