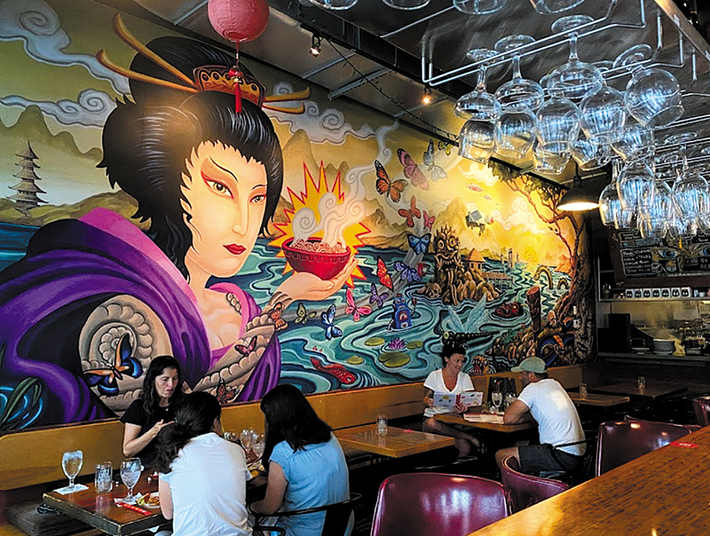 Kapow, the small noodle bar that became an overnight success in Mizner Park, celebrates its 10th year with a big announcement: It’s moving.
“We had been eyeing a larger spot for a while. We’ve been in expansion mode before COVID,” said Vaughan Dugan, one of the co-owners. “We were paying attention to Bluefish, and when we saw they succumbed, it was a natural fit for us.”
Bluefish had opened in the former Gary Rack’s spot on the east side of the plaza just before the pandemic hit, Dugan said. “It was unfortunately really bad timing.”
Kapow will be doubling its capacity as well as adding outdoor covered seating.
Plus, he said, it will be air-conditioned.
“As hip and cool as Kapow is, it’s hot with the doors and windows open.”
Kapow is expanding the menu as well, Dugan said.
“So one of the cons of Bluefish — pros for us — we inherited their equipment. It had a sushi bar. We’re going to have a sushi bar, a hybrid kind of omakase — not all sushi, but we will be doing sushi as well. It will be an eight-seat bar by reservation only, and a private bartender to serve along with the sushi chef,” he said.
“We’ll have three private karaoke rooms in the back. They are soundproof and also are private dining rooms. We’ll have the ability to open them up, but the guests can order from the room — it’s fully automated. The only time you have to open the door is to get the food and drinks.”
One of the reasons for expansion is to make Kapow more than a noodle and drink bar, he said, to appeal to a broader group.
“It’s a demographic we’ve been missing,” Dugan said. “So many corporate headquarters are in town and Kapow is so small. It’s not the most conducive place for team-building meetings.
“We’re 10 years old, and it’s time to grow up a little bit. We’re the place for everybody. The 18-year-old barback comes in after a shift. My parents come. We’re not trying to put on a tie, we don’t want to grow up totally.”
He and partners Rodney Mayo and Scott Frielich of Subculture Group hope to open the new Kapow by New Year’s Eve. “We’re at the mercy of our contractors,” Dugan said.
Supply chain problems have hit them, too.
As for staffing, he said, “I’d be lying if I said it’s not a problem. We were able to retain most of our staff. We’re struggling to add to our team. There’s a lot of trading going on” with personnel, with different groups offering sweeter deals for signing on.
It will be twice the problem for Dugan and his team once they move, since they’ve already worked out a new concept to go into their current space. It is Penelope, a New Orleans-themed spot.
“It will keep the same Subculture vibe,” said Dugan, who described it as “less Bourbon Street and more French. Yes, Antoine’s, or somewhere in between, but more French New Orleans.”
Dugan said the move will not mean a stoppage in service: “We’ll close here on a Friday and turn our lights off, open up across the street.”
As for Penelope, “We should be able to turn it around in 45 to 60 days tops. Kapow is so small, only 1,500 square feet. We’ll upgrade the fixtures and do cosmetic changes.”
Other expansion is planned and the company is ready. “We’re in full expansion mode,” Dugan said. “We’re looking at Lauderdale, Delray and Jupiter. We were having the best year before COVID, and an even better year now.”
Kapow, 431 Plaza Real, Boca Raton. Phone 561-347-7322; www.kapownoodlebar.com.

In brief
A new restaurant quietly opened last month in the long-vacant former Patio spot in Delray: 800 Palm Trail Grille. A large outdoor seating area wraps around the dining room, where sandwiches, salads, fish and meat entrees are on the menu. Vegetarian and gluten-free items also are here. … Corvina Seafood Grill is opening in Boca Raton’s downtown area this month. Noted Washington, D.C. chef Jeff Tunks is at the helm. Locally caught seafood is touted as the star of a menu that includes meats and poultry. Corvina is at 110 Plaza Real South. …
A Mexican menu is on tap at the restaurant in the Norton Museum of Art in West Palm Beach. It coincides with the exhibit of Frida Kahlo, Diego Rivera and Mexican Modernism, which runs through Feb. 6. …
Meals on Wheels of the Palm Beaches is again delivering Thanksgiving pies with its Pie It Forward campaign. Order a chef-made pie (apple, pumpkin, pecan or Key lime) until Nov. 17 at https://mowpbpie.org.
South County pickup is Nov. 23, 11 a.m. to 6 p.m., at Duffy’s Sports Grill, 1750 S. Federal Highway, Delray Beach. Each pie sold feeds a homebound senior for one week. Don’t need pie? Buy a virtual pie to donate to MOW instead.