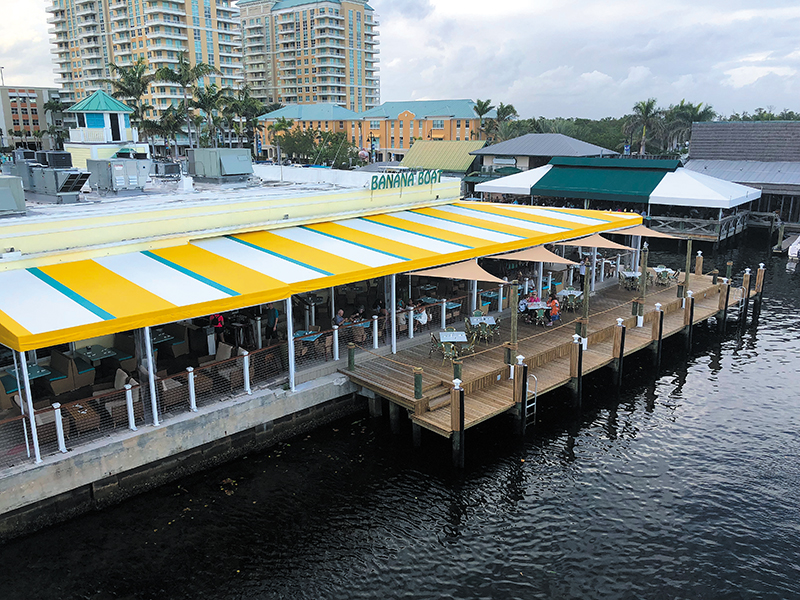 The Banana Boat last remodeled in 2017, expanding its dock area. It serves a mix of tourists and local residents. Photo provided

Not much was happening in what would become the downtown of Boynton Beach back in 1978. Drift boats, commercial fishing boats, and charters owned the waterways and tied up at the marinas scattered along the waterfront.

Society types dined at Busch’s Seafood on State Road A1A. But the working population’s watering hole was Two Georges, basically just a bar with rustic tables made of old wire spools, set back on Sixth Street in the pocket marina northwest of the Ocean Avenue bridge.

“My dad had three other partners, and they eventually built seven Banana Boats in Broward. But each one had their own goals and dreams and it got to be too much. So they sold the partnership,” said Luke Therien, the second of John’s three sons.

“He moved to Boynton Beach. It was quieter here and he was getting closer to retirement. He found a great piece of property on the waterfront, and thought it was the next big area to grow.”

All his predictions came true, and last month the Banana Boat celebrated its 40-year anniversary. Though John died in 2015, his sons continue with his plans, expanding on them.

Luke describes it as a “drastically different place” from its initial format.

Plans in 1978 were that the Banana Boat, with its water views, would offer a lounge and dining room for locals, and eventually, docks for boating customers.

“In the original concept, it was to serve a working-class community. It was more of a bar and grill,” he said. “In 1978, Boynton Beach was a farming and fishing community. Working-class people who came in for a cocktail after work, happy hour. You could come in and get a sandwich and a drink for a reasonable price.” It didn’t attract winter tourists or beach residents, he said — more locals.

Today, he says, “there’s a tremendous tourist business, seasonal people, country club, beach residents”  — and working-class types, young and old, all in a mix dining and drinking at the Banana Boat. 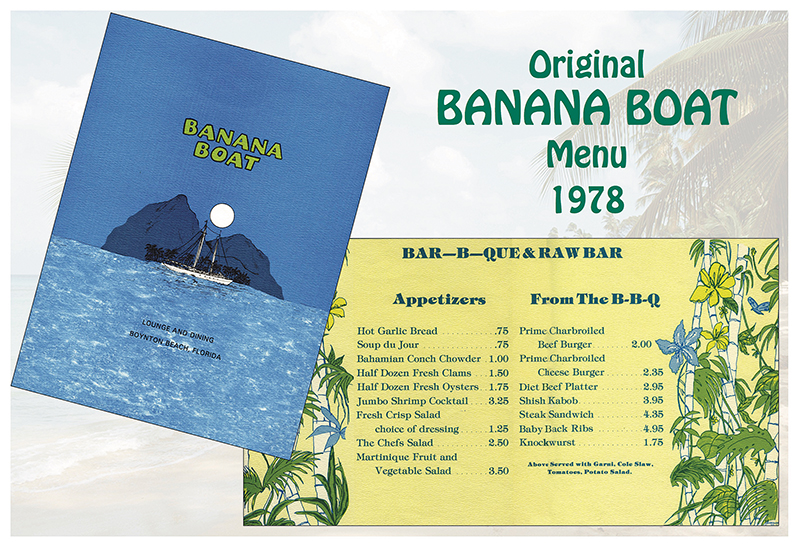 In 1978, the menu was much smaller — as were the checks. A burger was a whopping $2, and conch chowder, a buck. There were mountains pictured on the menu behind a sailboat.

Today, the burger will set you back $12.95, and a crock of conch chowder, $6.50. The menu is much larger, with a variety of fresh seafood, steaks, and contemporary “bowls.”

It remains family-run, with a Therien on site daily. “My older brother, Pierre, and my younger brother, Gilles, worked there from the beginning. I didn’t start until 1996,” Luke said.

Oscone Roger, assistant chef, has been on board for 37 years; senior cook Pierre Lombard for 34, and senior cook Andre Demesmin for 29. Another 25 employees have been with the restaurant more than a decade.

The workers have changed, too, in their makeup. “They used to be working-class people, working 70- to 80-hour work weeks,” Luke said. “Now, we have certified professional chefs, college-educated managers, college students working for their degrees and young people with families who are making this their profession.

“They work 40-hour work weeks and it is treated as a profession.”

The Banana Boat was renovated in 2000 during a multimillion-dollar makeover of the waterfront area; about 1,000 square feet was added to its footprint. A new Ocean Avenue bridge replaced the 1935 one, and Marina Village, a mix of condos and retail spaces, was created in the former laid-back pocket.

“We renovated again just recently — 2017 — and added docks on the north side. That’s the first time we’ve had docks there,” Luke Therien said.

Over the years, notable visitors have left behind great stories, though “none I can tell,” said Luke, laughing and playing the diplomat.

There’s no sign of slowing. The family stays busy, as it also owns Prime Catch, a seafood restaurant on the water at the Woolbright bridge.

“We’ve embraced the service industry down here,” Luke said. “We take a lot of pride in it.”

The restaurant team is active in community affairs and charity work. The Theriens all live in Boynton and spend their time here, though they’re originally from Montreal.

Luke is especially pleased in how the downtown has grown, yet maintained its character by keeping family-owned restaurants around its core.

“That’s more representative of what the Boynton Beach downtown always was,” he said. “A fishing village.”

Boynton Beach bid a sudden farewell in October to Torchio’s Finer Meats and Deli, a longtime favorite of many on Woolbright Road west of Interstate 95.

The meat market and deli opened 40 years ago, and though no longer owned by the Torchio family, was a popular spot for lunch and pickup dinners.

Customers stood in line for Italian subs, salads, pastas and more; both everyday and special-occasion meats and prepared dishes as well as desserts were picked up for parties.

Owner Richard Walker closed the deli with no notice — just a handwritten sign on the door posted Oct. 25 that it was closed, explaining only, “It’s time for us to move on.”

On her Boynton History blog, Janet DeVries Naughton writes of its closing, reminiscing: “I remember the store well, its spicy aroma and busy atmosphere. Cases of meat — prime rib, hamburger, veal cutlet, and sausage — fresh-ground homemade Italian sausage. Dry goods and vegetables displayed on shelves, in baskets and refrigerated cases, some homemade pies, and a full-service deli counter. My mom used to refer to it as ‘the stinky store,’ a term of endearment that goes back to the Italian butcher and delicatessen we used to visit in Chicago.”

Nora Hoover, who lives within walking distance of the deli, had been shopping there for years.

“Torchio’s was a family-run business that treated everyone like their own family. They watched our daughter grow up — and always recognized our voices on the phone. Our favorites were the Italian sandwiches,” she said.

Julie Houston Trieste also lived close by as a girl, and rode her bike to the deli. Though not a regular whose name they knew, she loved it and was particularly fond of the stuffed pork chops. “They were divine!”

Naughton urges residents to patronize family-owned shops, saying Torchio’s closing is proof that “some day, they won’t be there. You’ll be lucky if there’s a kind note left on the door.”

In brief: Blue Ocean Poke will be coming to the former Beer Trade location on South Federal in Boca Raton this winter. Poke is a pan-Asian bowl concept popular as a Hawaiian street food. …

Don Chepo’s taco shop officially opened in Boca at The Boardwalk of Boca Raton Shops on Powerline Road and Southwest 18th Street. This is more street food, tacos as sold in stalls and off trucks come to a brick and mortar. Two-dollar tacos are sold on Tuesdays. … 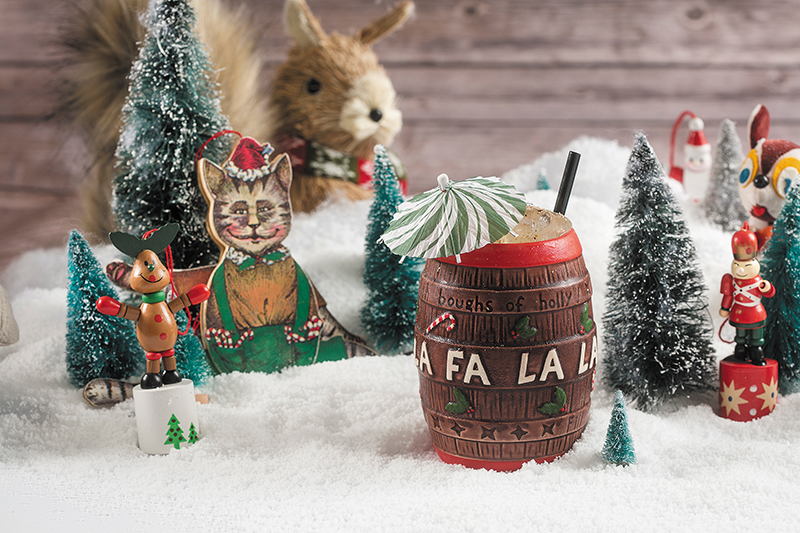 Miracle’s Christmas Carol drink is made from barrel-aged rum and other ingredients.

Through Dec. 31, Miracle, a pop-up bar, will operate at Death or Glory in Delray Beach, with a second one at West Palm Beach’s CityPlace. Special holiday cocktails are available, and they’re poured in special glassware that, if purchased, means a donation for the charity Action Against Hunger.

Jan Norris can be reached at nativefla@gmail.com. Thom Smith is on leave.