Food safety and ice cream were hot topics this summer, as some big brands were recalled because of listeria, a harmful pathogen.
But it wasn’t a problem for the Ice Cream Club because of strict protocols in place at the company’s Boynton Beach facility, according to co-founder Richard Draper.
Training workers, vetting suppliers and exercising constant vigilance are crucial, he said.

“We tell our workers they’re not making shoes — they’re making something that goes into people’s mouths. You can’t say, ‘I’ll get this almost right,’” Draper said.
They’ve learned solutions by dealing with problems unique to small-to-midsize manufacturers of food, and now the company teaches others how to prevent foodborne illness at the manufacturing stage, he said.
Draper is part of a national group, the Artisan Ice Cream Food Safety Advisory Team, created through the Innovation Center for U.S. Dairy.
“We straddle the industry,” he said, describing his company of 60 employees as small compared with corporate giants, but “a big fish in a small pond” among the community of artisan ice cream makers.
The Ice Cream Club owns only the Manalapan ice cream shop of that name but produces 3-gallon tubs of ice cream for larger clients such as hotels, country clubs and retirement communities.
“We learn from the big companies,” Draper said.
He then shares that knowledge with small producers, especially those working with multiple vendors for ingredients.
Ice cream depends on several producers, such as growers and packers of fresh fruits and nuts, and manufacturers of other flavorings that make artisan ice cream special.
“We make a lot of different flavors, and we have a lot of vendors for all the ingredients. The consumer doesn’t see this part of it, they only see our ice cream,” Draper said.
If anything went wrong, the consumer would focus on the ice cream — not the cherries or pistachios, for instance.
The Food Safety Modernization Act, which became federal law in 2011, changed tracking of ingredients and food handling throughout the industry.
Food safety became collaborative, with company owners working with regulators and academia to improve the food chain throughout.
“It was good for the industry,” Draper said. “It flipped things around. Regulators came in and did a real-time look,” and instead of a cursory inspection, focused not just on plant records, but those of the vendors used.
“It put the burden on the company to verify our suppliers,” he said.
Now, food makers are responsible for vetting their vendors and tracking their products — holding them to the safety standards required to keep the process safe at every step.
The Ice Cream Club has safety measures from door to door, from delivery of ingredients and storage, to the cleaning of the plant and constant employee training. All must pass inspections.
“It’s safety first,” Draper said, then quality. Technology is a help, evolving along with the industry, identifying and solving potential problems before they become harmful.
“It’s all made us a better company, too,” he said.
The food safety focus can’t be overstated, Draper said. He said it’s especially important for the people at the retirement homes he serves.
“Our ice cream is often the last food someone can eat — soft and creamy. We don’t take that lightly.”
He checks quality by eating his product and watching workers at his store.
“We live nearby and I like to stop in and see how things are going and watch the faces of the customers when they get their cones,” Draper said.
“It brings them joy.”
The Ice Cream Club, 278 S. Ocean Blvd., Manalapan. 561-582-0778; icecreamclub.com. 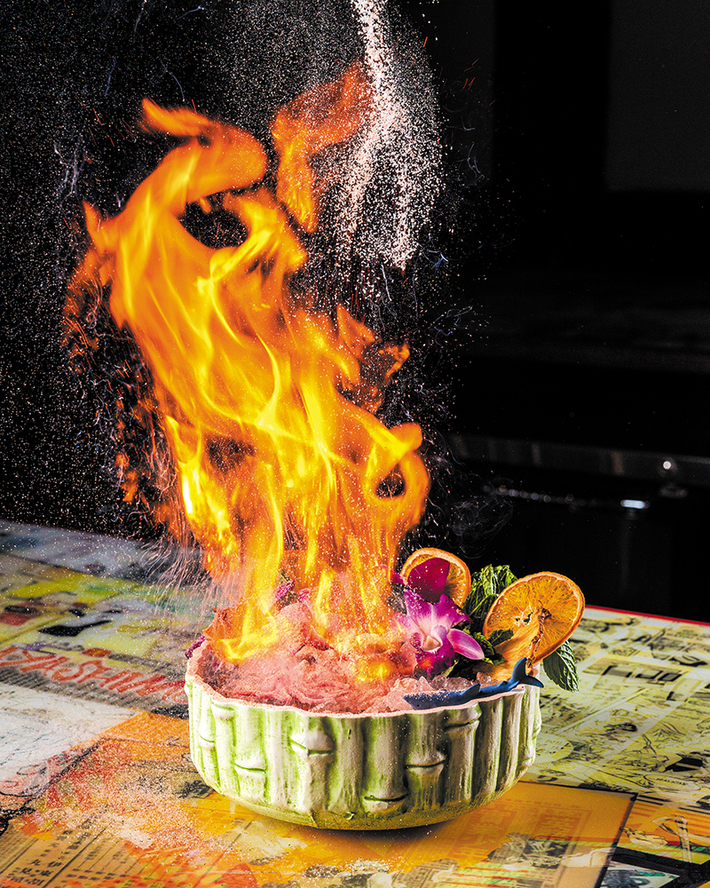 Expanded Kapow opens
After a few setbacks in its timeline, Kapow Noodle Bar has opened in its new space in Mizner Park.
Co-founder Vaughan Dugan of Sub-Culture Group calls it a merging of “art, technology and sustainability.”
The original opened in 2011 to acclaim, with innovative noodle dishes, sushi offerings and a hip vibe.
The pandemic halted the restaurant’s inside business; tents became the norm in the parking area. The owners decided to use the downtime to expand, finding another space in the central courtyard of Mizner Park. They doubled Kapow’s interior seating and added an outdoor covered L-shaped patio, as well as private automated karaoke rooms and an omakase bar.
A new look created by Manhas Design pays tribute to the old, while updating the restaurant. Hanging at the entrance is a lucky waving cat, and a 95-foot animated mural along the ceiling keeps diners engaged.
Rodney Mayo, Sub-Culture founder, said the menu is being updated and will be more of what diners want from Asian-inspired cuisines, including authenticity.
“Diners’ palates have grown along with their desire and openness to try more authentic Asian flavors,” he said in a statement.
Fan favorites remain, however, including salmon tartare crispy tacos, hoisin BBQ baby back ribs, and Vietnamese chicken wings.
New items include Korean wagyu beef tartare, king prawn banh mi, and Cantonese ginger scallion lobster. Vegetarian offerings include carrot dumplings with bamboo shoots and mushrooms.
It’s chef’s choice at the eight-seat omakase bar, where sushi is prepared for an individual dining experience from items not on the menu.
A new corporate pastry chef, Lee Mazor of Miami Beach, will roll out matcha Vietnamese coffee cake, a black sesame cremeux, and an ube gateau — a fudgy, sweet potato cake.
Mixologist Angela Dugan has created new drinks, including the Akai signature cocktail, made with El Tesoro blanco tequila, hibiscus, mezcal, ginger, aloe liqueur, and aquafaba — a chickpea foam. A Kazan is a flaming volcano bowl for two, with two rums, toasted rice and avocado orgeat, yuzu, and coriander-lemongrass stock.
Going into the old Kapow space is Penelope’s, a New Orleans concept from Sub-Culture. Innovation is what the company is all about, and new concepts are constantly in the works, said Vaughan Dugan. “We truly love what we do.”
Kapow Noodle Bar, 402 Plaza Real, Boca Raton. 561-567-8828; www.kapownoodlebar.com.

Coming to Lake Worth
Man Ray, a restaurant by Mayo and Sub-Culture Group, is scheduled to open by the end of the year in the former CWS/Cottage space on Lucerne Avenue in Lake Worth Beach.
It’s a spin-off of Dada, a favorite in Delray Beach. The new restaurant will follow the same eclectic art movement theme, Mayo said, and so takes the name of the famous artist who created it.
It will be a split-schedule space, with a Subculture Coffee shop running till 5 p.m., then becoming Man Ray for dinner service. Weekends are likely to feature live entertainment, Mayo said.
A tree in the middle of the outdoor area reminds Mayo a little of Dada. “I always wanted that space. And it’s off-Avenue. I like off-Avenue.”
The menu will be chef-driven and eclectic, he said, “everything from meatloaf to beef Wellington.”
Finding “the right property at the right time” is the reason he’s going into Lake Worth Beach. “A lot of people have been chewing my ear for years about opening there. My friend owns the building so that helps a lot. No Realtors involved or any of that stuff.”
Another draw is a “whole new audience. A lot of the people in Lake Worth are people like most of my workers who have been priced out of West Palm Beach.”
Moderate modifications are coming to the indoor-outdoor spot, with most seating set to take advantage of the outdoor area.

In brief
Taste of Recovery, the annual dine-around that benefits hospitality workers in recovery, is set for Nov. 5 at Old School Square with a number of Delray Beach area restaurants participating. Chef Louie Bossi of restaurant fame is the founder. ...
Boca Helping Hands is looking for volunteers to help provide meals for Thanksgiving and other holidays. Members of the community can donate the cost of a box for $31.48 at BocaHelpingHands.org/Thanksgiving.