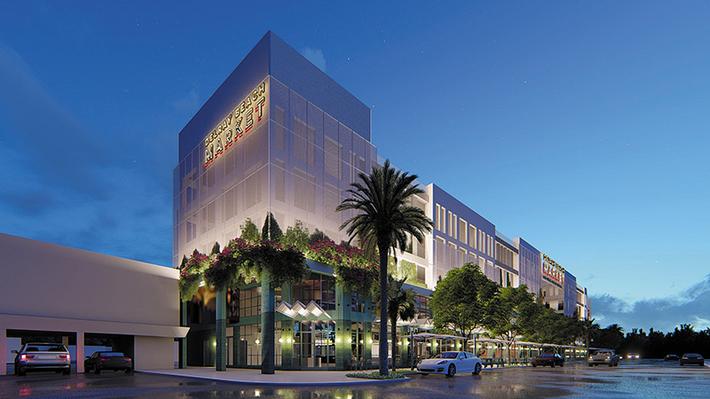 The 150,000-square-foot Delray Beach Market will have more than 30 vendors of food and other products. It is scheduled to open in March. Rendering provided

With completion only a few calendar pages away, the Delray Beach Market is in the final stretch of signing on vendors. But like other businesses opening just now, 2020 problems are bleeding into 2021 plans for what is billed as the state’s largest food hall.

The $60 million, four-story project on Southeast Third Avenue, created by Menin Development of Delray Beach, has been years in planning. With 150,000 square feet — roughly three times the size of New York’s famed Eataly — it’s slated to have more than 30 independent vendors selling everything from sushi to surfboards starting sometime in March.

“Obviously, COVID has thrown us for a loop,” said Jordana Jarjura, Menin’s president and special counsel. “So what we’ve done is cut the permanent stalls from 32 to 25 and spaced them out. To make up for the stalls we removed, we’ll be reaching out to vendors using carts, such as Guaca Go,” she said.

Craig O’Keefe, managing partner of Clique Hospitality, the group responsible for managing the food hall, said that “one of the cool parts of having to eliminate stalls” is the creation of “an awesome opportunity for more startups, small mom-and-pops who wouldn’t otherwise have a chance to get the exposure they’ll get here.

“This will give people an opportunity to experiment and do some cool stuff.”

These vendors will rotate, depending on their success. The goal of each is to become a regular vendor, and Jarjura said “we will be happy” to lose anyone to a brick and mortar space. “That will mean they were successful. We’d love to see that.”

The development group has tried to attract food makers who aren’t represented along the busy Atlantic Avenue and surrounds.

“We were looking for authentic ethnic, local when possible, healthy and memorable,” Jarjura said. “We have Indian, Lebanese, Pan-Asian, healthy quick breakfasts and many more that will be unique.”

Vendors will include vegan, Mexican traditional, Italian pastries and a Caribbean stall with conch salad, conch fritters and Kalik beer. They will come from around the county with a few outside of the area, Jarjura said. Some local chefs and food providers are on board. For example, Jimmy Everett of Driftwood in Boynton Beach will pay homage to Mexican sisters with Sorella’s, a fresh pasta stall.

“I was trained by these two Mexican sisters in New York who learned how to make pasta from this little Italian woman. Back in the day they really were the ones doing fresh pasta shapes for all the top restaurants,” he said. One of the pair died from cancer and with her went the dream of opening their own pasta shop.

“So Sorella’s means sister in Italian, and the shop is in honor of them,” Everett said. The tiny stall — roughly 250 square feet — will offer fresh pastas made on the spot, and sauces with some other components for a pasta dish.

A display case will have pastas by the pound, along with sauces to take home for a DIY dinner.

The retail is a bonus for Everett, and even though it won’t bear the Driftwood name, it’s up to his standards. Retail, he said, is a growing aspect in the restaurant industry as COVID-19 still keeps diners at bay.

The developers have taken the virus into consideration, with a cashless business model, touchless bathrooms, collapsible nano walls for open-air spaces, and outdoor seating as well as spaced-out interior tables.

The stalls are minimalist in decor by design.

“We wanted stripped-down stalls so the public can see the vendors in action. They can watch the pasta being made, and the sushi chef making sushi,” Jarjura said.

The money for decor was spent instead on murals, and a variety of artwork by local and national artists in a mix of media will be displayed, and rotated in and out.

“We want it to be a feast for the eyes and the soul,” Jarjura said.

A great deal of interaction will be involved in keeping the sprawling space lively. The mezzanine features a show kitchen and play area for kids, as well as a community gathering space where meetings or social events could be staged. While parents get some computer work done on the free Wi-Fi, kids can engage in gaming nearby. Balconies provide more open-air spaces on this level.

Jarjura believes the market will become a new social gathering space. “The Greenmarket is the green outdoor community space; we’re going to be the indoor community hub.”

The projected number of visitors is large, 2,000 a day, but the team said that has to do with the large hall, long hours of 7 a.m. to 11 p.m. every day, and the chance for visitors to come and go or to stay awhile.

“It seems like a really large number, but over the course of an entire day, people will come and go throughout, and different spaces will be utilized. With so much flex space it offers a lot of freedom to move around,” O’Keefe said.

The vendors have signed on for one year, minimum. And not all are for food, despite the description of the market.

Briny Breezes' surf shop Nomad is slated to set up shop indoors. It will offer beachwear and supplies for a day at the shore.

“We have some retail spaces in the market. They were a local favorite. I went to school with Ronnie Heavyside,” Jarjura said. “His father started it in the ’80s. And I know his brother Ryan through Ronnie. I just thought Delray was such a large part of their history.”

One example of the market’s authentic ethnic flavor is the Tiffin Box, a fast, fresh Indian takeout.

“We wanted traditional Indian,” Jarjura said. “The way he presents his cuisine, it’s more approachable. Even if you’re not familiar with Indian, it’s very easy to approach it.”
Bona Bona is an extravagant ice cream shop that has adult “boozy” mixtures along with family favorites. Tekka Bar is the sushi stall, coming from operators who are from Las Vegas.

O’Keefe said cocktails and beers will play a role in the market. A lounge area in the flex space on the mezzanine can host special or private events and turn into a more club-like atmosphere at night.

“Several vendors have their beer and wine license,” he said. “Sake at the sushi stall. There is a central bar on the ground floor; it’s the main focus for beverages on the ground floor. There will be the coolest craft beer bar in Palm Beach County among the retail components. The mezzanine bar is the only other bar with hard liquor.”

The lounge area is a potential community hot spot in the daytime, O’Keefe said. “Maybe Mommy and Me cooking classes, or how to play the ukulele, or yoga people can do. It will be real community engagement.”

Plenty of outdoor seating will be available on the oversized sidewalks.

“There is so much advanced technology throughout,” O’Keefe said. “You can order as a group on your phone with an app, from individual stalls, and pay as one ticket. And you will get a text message once your food is ready for pickup.”

As for parking, the four-story structure includes 220 spaces in an enclosed garage.

Co-owner John Calomiris of Dune Deck Cafe in Lantana said he was embarrassed after decades in business to have to discuss a rodent problem at the oceanfront restaurant.

“We know, the city knows and the exterminator knows about it,” he said. “They live under the wooden sidewalk and in the brush all around the restaurant. That is their home. They are out of control. The city came to clear out the brush at the back of the restaurant, but you can’t control them.”

Inspectors shut down the popular eatery when rats were found in the kitchen, and other violations, including a dirty ice dispenser, were discovered.

Overnight the restaurant was cleaned, reinspected and reopened within a day, Calomiris said. Crews come in early daily to clean, and a second crew comes at night, he said.

Without a sealed walkway next to the restaurant on the ocean side, he doesn’t foresee an end to the problem.

“It’s embarrassing,” Calomiris said. “I’ve been here for 40 years, and haven’t been shut down except for COVID for 90 days.”

In brief: A makeover is in the works this year for the former Rum Bar and Grill at the Waterstone Resort and Marina in Boca Raton. It’s planned to become a premier outdoor waterfront dining experience, according to publicist Michelle Soudry of the Gab Group. … A high-end steakhouse will open in Delray Beach in 2021, brought to South Florida by the owners of Scarpetta and Campagna in New York City. Details will come as plans are released. ... At the end of December, longtime restaurateur Henry Olmino moved Mario’s, his popular Italian eatery at 225 Ocean Avenue in Lantana, to 707 Lake Ave., Lake Worth. In September, Olmino opened Fire and Ice at the Lake Worth location. The restaurant is now known as Mario’s on Lake Avenue. Mario’s had been in Lantana since 2015.