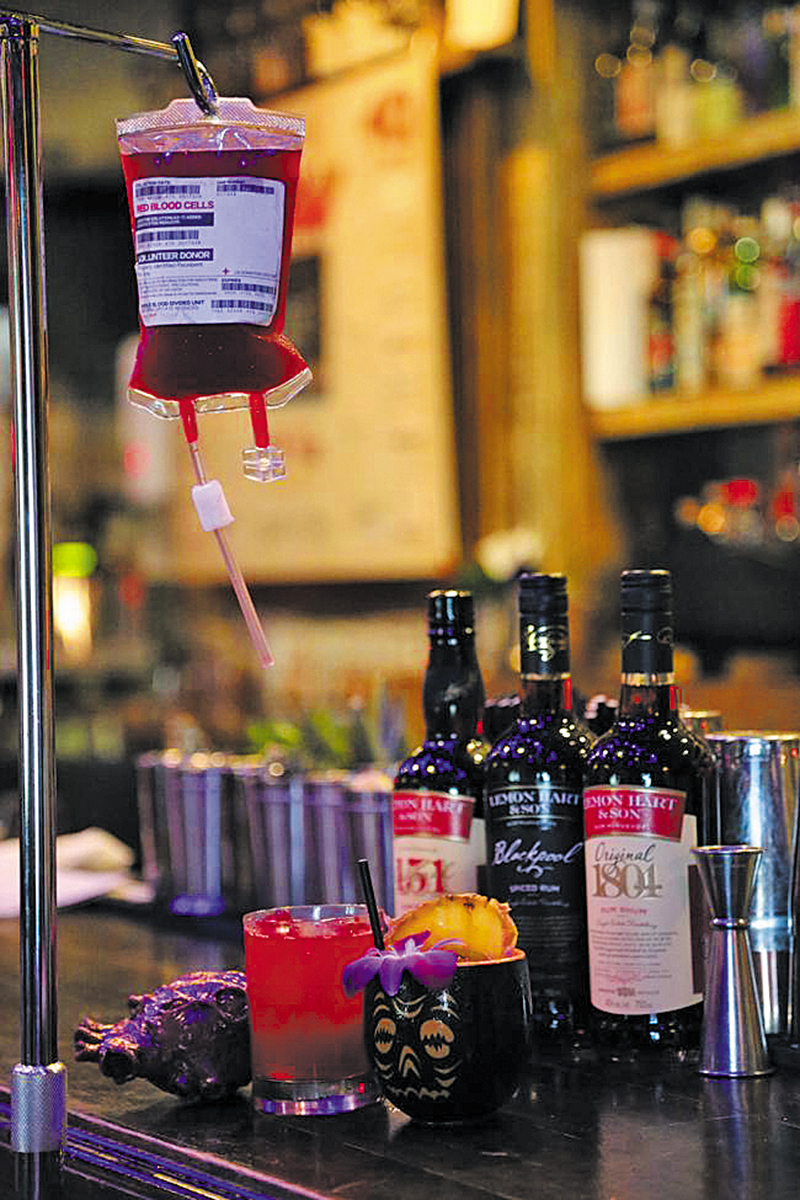 A few of the decorations at Death or Glory are not for the faint of heart. Bloody Mary mix served from an IV is intended to chill your soul. Photo provided

They’re getting spirited in more ways than one at Death or Glory in Delray Beach. A Halloween pop-up has overtaken the bar, where all things spooky are being celebrated through the end of the month.

The bar known for craft cocktails is decorated throughout with All Hallows’ Eve pieces, from skeletons holding hands to skull garlands gracing doorways.

Annie Blake, a partner in the gastropub, says Halloween is a perfect match for the establishment. The pop-up began in mid-September, she said, extending the party.

“Halloween is a stress-free season, without family dinners, presents, or the hope of the often elusive Valentine,” she said. “Our guests are having so much fun with the extension of this whimsical holiday that turns its nose up to all things serious or depressing.”
The menu, changing as it goes along, has 13 cocktails for “ghouls and boys,” some inspired by Edgar Allan Poe. There’s a pineapple-cucumber-Orgeat syrup and green pearl onion “Nevermore.”

Guests are getting a kick out of all the puns and presentations — some in tiki mugs, others a bit more creative, Blake said.

“The Dead on Arrival communal bowl, which we serve in a ‘blood’ bag, and the Buddy of Christ, which looks like it’s served in a prayer candle but rather than focusing on Jesus, features our mascot, my doodle Buddy Marie, have gotten the biggest chuckles.”
Food follows suit, with names for common favorites referring to scary movies or people. The Birds is chicken wings, It’s Alive is octopus, Children of the Corn is cannelloni with corn succotash, and Pumpkin Head is chopped root vegetables with a vinaigrette.
The pop-up continues through Halloween night, when the band Spider Cherry will perform.

A Palm Beach County institution has been reborn. Tom’s Place is now open in the Boynton Beach Mall.

The barbecue place that first opened on Dixie Highway near Glades Road in Boca Raton in 1977 and has had several iterations is under the management of the family of the original owners, Tom and Helen Wright. Their daughter, Belinda Wright, and her brother Kenny have led the effort to reopen.

On Dixie Highway, the place was known for wood-pit-smoked ribs that drew crowds lining up for takeout; the only seats were picnic tables outside. Celebrities waited alongside construction workers on lunch breaks, and moms picked up dinner after work.
Tom Wright expanded the place slightly, putting in long communal tables. The Wrights eventually moved Tom’s Place to a bigger location on North Federal Highway with indoor seating and table service. It closed after Tom had a stroke in 2004. An outpost opened for a few years in West Palm Beach.

Tom’s BBQ Sauce became a souvenir and would find its way into northbound luggage.

The Southern fare that became a major draw is repeated on the menu at the mall location in the former Buca di Beppo. Ribs and pulled pork, napped with their namesake tomato-based sauce, fried catfish, smothered chicken, pork chops, mac ’n’ cheese, muffins, collards and black-eyed peas are here, as are the house-made desserts: red velvet cake, pound cake, sweet potato pie. A full liquor bar is in place in the bar room from Buca di Beppo.

Decor is modest with red-checked tablecloths and wood chairs with leatherette. The walls are peppered with memorabilia such as photos of family and the original Tom’s.

Old customers have found it, reminiscing on social media and eagerly following announcements of the opening. It was delayed a month for inspections and licenses.

The new Tom’s was at first closed on Tuesdays. That is Belinda Wright’s recovery group meeting day; she is a former addict and was briefly jailed following a drug probe involving her ex-husband.

Now sober, she works with others in recovery and participates in the Crossroads Club in Delray Beach, a support program for people with substance abuse problems.

The mall store is now open every day. Takeout and catering are available.

Green market season opens this month and runs through spring. The Boca Raton Greenmarket starts its 23rd year and will remain at City Hall. Last season, the market moved from its original home in Royal Palm Plaza to alleviate parking problems.

It’s a dog-friendly market, and has live music.

The Delray Beach Green-Market also opens Oct. 26 and marks its 23rd year. It was started by the Community Redevelopment Agency as a downtown draw.

The market is open from 9 a.m. to 2 p.m. Saturdays through mid-May.

The Lake Worth Farmers Market under the bridge will be returning this year on Oct. 19 without its founder. Peter Robinson, longtime greenmarket organizer in Palm Beach County, is retiring. His assistant will now oversee the Saturday market by the bridge at A1A that has fresh produce, plants, prepared foods and bakery items, and artisan products for sale.

A return to the stoves: Chef Bruce Feingold, longtime chef at DaDa in Delray Beach, moves east on the avenue to take over Deck 84 kitchen. He says he’ll work with owner Burt Rapoport to put his stamp on the menu, including dishes such as coconut marinated half chicken with a maple, gochuchangn pineapple and kim chi fried rice. Give it time: Changes will evolve beginning late October.

In brief: Tourism was knocked sideways while Hurricane Dorian made up its mind. Because of that, some restaurants in Flavor Palm Beach are extending the program to Oct. 8 or beyond. It features multicourse meals from $20 to $49; check https://flavorpb.com for details. …

In Delray Beach, 50 Ocean’s Great American Road trip had to detour because of the storm, so Oct. 11 is the next date for the dinner series. Calle Ocho is the inspiration for a Cuban-themed dinner with Latin jazz, cuisine and hand-rolled cigars to finish. Find details at www.50ocean.com. … 50 Ocean chef Tom Op’t Holt won the first round of Culinary Kombat over chef Adam Brown of the Cooper in Palm Beach Gardens. The contest runs Thursday nights (except Halloween) through Nov. 7 at Salt7 in Delray Beach and benefits the Milagro Center.