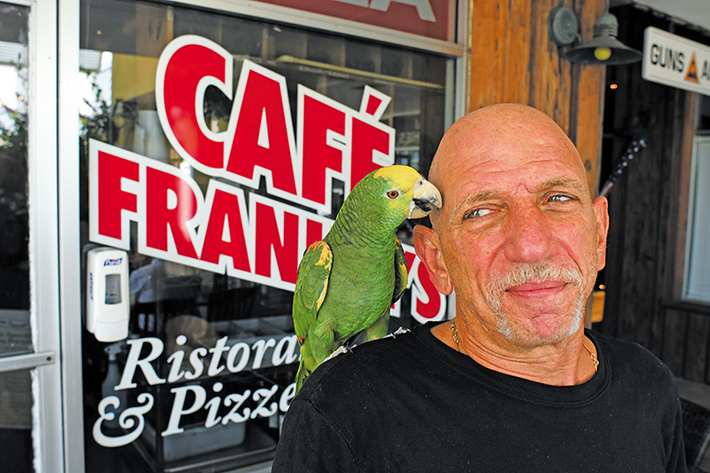 Anthony Calicchio and Frankie the parrot are ready for a break. 2018 file photo

Café Frankie’s has new owners — a pair of Irish-Italian brothers from Staten Island.
Former owner Anthony Calicchio is happy about the deal he made for his Boynton Beach eatery, and says he’s ready for an extended break.
He explains: “I’m tired. Nobody wants to work anymore. I’m working too hard — clearing tables, filling water glasses, taking orders, running the kitchen. If I keep doing it all, I’ll be dead by the end of the summer.”
He is sticking around to be with his parents, who are 87 and 88. Otherwise, he said, “I’d be sitting on an island somewhere in the Caribbean. Any island.”
On Sept. 20, the Brooklyn native inventoried the wines and signed the sale papers, walking away from the restaurant where he spent the past 15 years. He began as a chef for its former owner, the Boys Market group, then bought it two years later.
“We disagreed about the way things were run, and couldn’t come to an agreement, so I had to buy the restaurant to do it my way,” Calicchio said, grinning.
In the immediate future, Calicchio plans to ride off on his motorcycle from his home in Boynton Beach, keep an eye on his parents in west Boca Raton — “I go see them and eat with them every Sunday” — and hang out with Frankie, the yellow-winged Amazon parrot and former ambassador for the restaurant.
The bird was named for the cafe and spent about the same amount of time there as the owner. He perched on the patio, greeting all who passed by with “fugetaboutit.” Frankie was the subject of local news after being lost for a week and finally returned with the help of the police. “He’s my roommate,” Calicchio said.
His long-range plans are for a breakfast or lunch spot, maybe a food truck — something to do with serving food — “in a couple of months, maybe.” Calicchio says food is what he loves, ultimately, along with his work as an artist. He’s sold more than 300 of his paintings that adorned the walls of the eatery.
His mother’s recipes were part of the menu and will still be available from the new owners, Tom and Steve Smith, as will Calicchio’s limoncello and Grand Marnier concoctions.
He says he feels good about the Smith brothers and is satisfied they’re keeping a lot of his menu intact, as well as keeping the staff on board.
Calicchio and the staff have been through a lot together, he said, including the pandemic shutdown, when he lost 70% of his business, and the serving of 1,000 free meals since the coronavirus outbreak.
“We never turned away anyone who couldn’t pay. We gave away meals right after it started,” he said.
Tom and Steve Smith agree that a lot of what makes the restaurant a neighborhood favorite is the “good staff, and traditional menu.” Perfect for the area, they said.
“We love it. It’s a tight-knit community,” Tom said.
Steve, 52, will be the co-chef with the current chef, Winston Telesford. Tom, 55, says, “I’m the eater.”
The men had restaurants before on Staten Island — the American Grill and Sea Breeze Cafe. They’re moving to Florida to “get out of New York,” Tom said. They’ll follow a brother, a retired NYPD officer, who moved down earlier, and join their mother, moving soon.
After a brief cleanup and restock, they planned to fire up the stoves and be back in action, keeping the Café Frankie’s name.
New daily specials will be added to the menu, and the cafe will be open for lunch once again, Tom said. The restaurant shut down midday service after the pandemic hit.
Specials may go beyond strictly Italian, with some Asian and other cuisines, Steve said. “We’ll try a few things to see — test the waters.”
But if anything, they’ll add to the Italian menu. They’ll serve Mama Ventriglio’s Sunday Gravy, named for their mom, on the Sunday traditional Italian dinner. “We’ll have all the Italian Sunday favorites — ravioli, spaghetti and meatballs, manicotti,” Tom said.
“We’ll save risotto and osso buco — the real one — for Sundays,” Steve said.
Tom is his brother’s biggest fan. “We’ll put great soups on the menu, too — his soups are amazing. He makes a pumpkin in the hay,” Tom said. That’s a pumpkin cream in a hollow, roasted, mini-pumpkin, with prosciutto-wrapped shrimp hanging from its edges.
Steve plans to change the menu seasonally and incorporate more of Florida’s seafood into it.
“Oh, yeah: We’ll still have pizza,” Tom said. “We love Frankie’s pizza. We’re keeping the pizza chef — Peter Cortes — he does a great job. I’m from Staten Island and I’ll put his pizza up against any there.”
Also remaining on the job is restaurant manager Dena Balka, a fixture at the Café Frankie’s well known to customers.
The new owners are happy to be among the crowds relocating from the Northeast, primarily for the weather, they said.
Tom, who will marry soon and set up house in Palm Beach County, says he has a dog named Snow. “It’s the only snow I want to see ever again.”
Café Frankie’s, 640 E. Ocean Ave., Boynton Beach. Phone 561-732-3834; www.cafefrankies.com 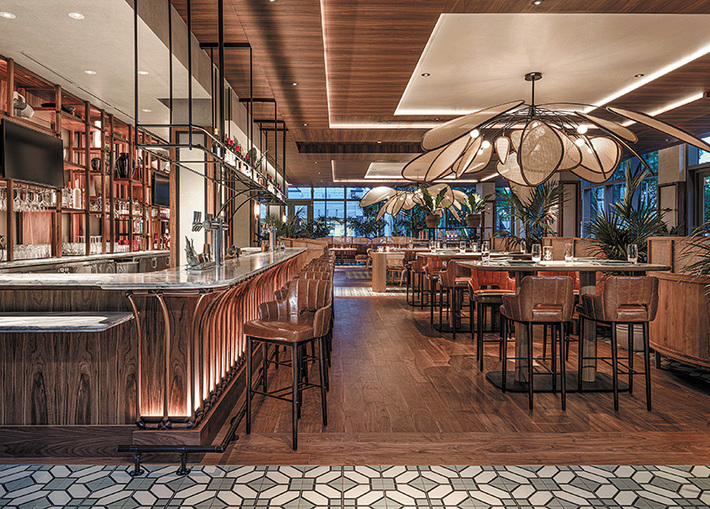 DINING AT THE RAY: Ember Grill is billed as a modern take on traditional neighborhood grill fare with sustainability and seasonal foods. Central to the restaurant’s design is a special wood-burning grill from Spain. Photos provided

Pineapple Grove in Delray Beach is growing up and going luxe with the addition of the Ray Hotel, part of Hilton’s Curio Collection. It’s from the Menin developers — the same group behind the recently opened Delray Beach Market food hall off Atlantic Avenue.
With the Ray, a 114-room luxury hotel, comes high-end dining, starting with the signature Ember Grill, and a rooftop bar, the Rosewater Rooftop, a space that will accommodate 442 people and is designed for small plate sharing and seafood specialties.
Both will be overseen by executive chef Joe Zanelli, new to South Florida, and the Clique Hospitality Group, which is also behind Lionfish on Atlantic Avenue.
The Ember Grill is billed as a modern take on traditional neighborhood grill fare — with sustainability and seasonal foods front and center.
Crabcakes, duck pancakes and charred octopus will make use of the special wood-burning Josper grill from Spain, central to the open-kitchen design. Ember includes a private dining room as well.
At Rosewater Rooftop, five stories up with a 360-degree view of downtown Delray, there’s an “over-the-top” cocktail program to match the shareable plates on the global street food menu. Sushi rolls, mezze, quesadillas and skewers are among the dishes listed.
Canopies and lounge furnishings are set up for gatherings, with the pool nearby.
A special-events facility, a 22,000-square-foot floating glass cube, is another signature of the hotel, designed by Gonzalez Architects. 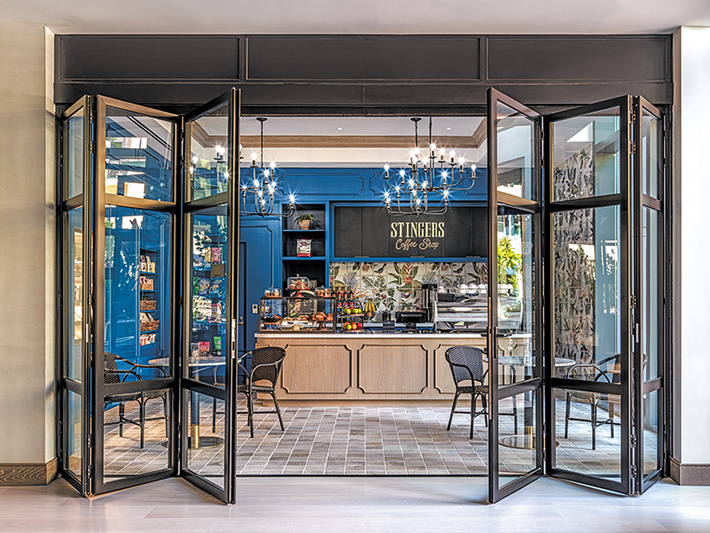 Stingers is a coffee and tea shop offering takeaway foods and drinks.

The hotel also has Stingers, a small coffee and tea shop offering takeaway foods and drinks.
Coming this fall will be a dining experience led by Akira Back, a Michelin-starred Korean chef who will bring modern Asian-inspired dishes. He is noted for his Yellowtail restaurant in Las Vegas.
For now it’s reservations-only through Open Table at both Ember Grill and Rosewater Rooftop, because of limited staffing and social distancing, said Jordana Jarjura, president and general counsel at Menin Corp.
“Like the rest of the world, we have been impacted by COVID-19 and have not yet met our desired staffing levels,” she said.
Ember Grill is open Tuesday through Saturday for dinner, and Sunday Brunch. Rosewater Rooftop is open for lunch daily, and dinner Wednesday through Sunday. Golden Hour is 4-6 p.m. Wednesday through Sunday.
Ember Grill and Rosewater Rooftop at the Ray, 233 NE Second Ave., Delray Beach. www.therayhotel.com. By reservation only, through Open Table.

Amar Mediterranean restaurant on Atlantic Avenue in Delray Beach has expanded to a bakery, Amar Bakery and Market in Boynton Beach. It offers baked goods and market specialties from cuisines around the Mediterranean. It’s at 1600 N. Federal Highway and open 7:30 a.m. to 2:30 p.m. Wednesday through Sunday. Visit www.amar-bakery.com.