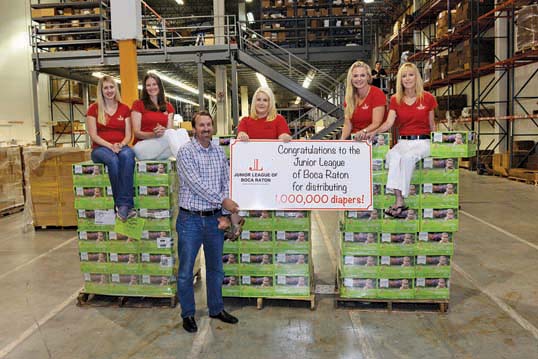 The Junior League of Boca Raton celebrated its one millionth diaper donation at the end of the 2014-15 season, surpassing all expectations for the 4-year-old initiative. The accomplishment demonstrates the community’s support of the Diaper Bank project while also bringing to light the need for diapers throughout the area. According to the United Way of Palm Beach County, one in three mothers struggles with diaper purchases. ‘The impact of the Junior League of Boca Raton continues to be felt in meaningful ways in households throughout our community,’ Boca Raton City Councilman Scott Singer said. The Diaper Bank distributes the diapers to 22 nonprofits. ABOVE: (l-r) Crystal McMillin, Kirsten Stanley, Christian Blonshine, Meghan Fielder, Andrea Garcia and Margi Cross. Photo provided