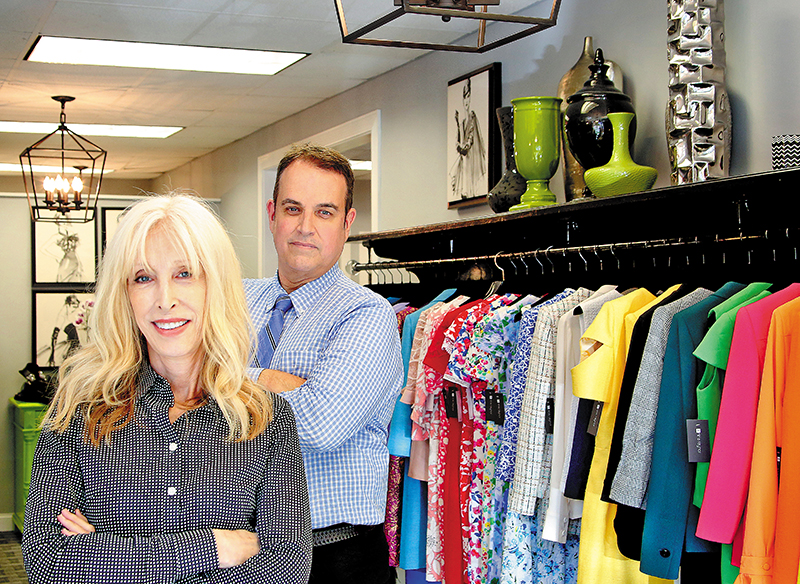 Nina Raynor has a new address, but the same personal service and showstopper dresses

On a Saturday afternoon in January, a customer arrives at Nina Raynor, Delray Beach’s special occasion women’s clothing boutique, carrying a dress she’d recently purchased. A club event is hours away and although she loves the dress, she’s having second thoughts about whether it’s right for the party.

Store associates show her a small selection of options. After a few try-ons, an accessory tweak and a discussion about shoes, the woman leaves the store smiling, her original purchase on her arm.

“They’re just great,” she says of the Nina Raynor team. “And so patient, listening to me obsess.”

That kind of personal service, no-pressure sales environment, and singular garments that look like works of art are some of the reasons Nina Raynor is Delray Beach’s oldest clothing store in continuous operation.

In December, the boutique opened its doors for the 62nd season at a new location: 210 NE Sixth Ave.

The shop, which traditionally operates seasonally from October through June, was a presence at its previous location, 1031 E. Atlantic Ave., for 29 years. Last year, Ocean Properties, the building’s owner, announced plans to repurpose the space, according to Bobby Wollenberg, who operates the family-owned boutique with his sister Cathy Sauer.

“They decided to expand their office space, so they needed to come into that part of the building,” he said. “Change is difficult, but yet it’s fun and exciting at the same time.”

When customers first learned the store was leaving its East Atlantic Avenue home, they had two main concerns, Wollenberg said. “All they kept repeating was they didn’t care where the store was, they just wanted Nina Raynor to exist. And the biggest request was that it would have parking. … So, I was able to accomplish that. It’s a great location and great parking.” 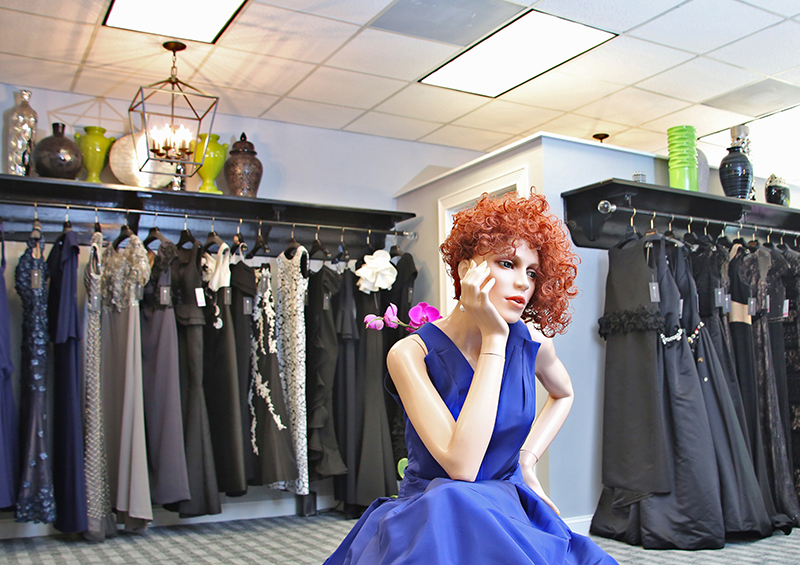 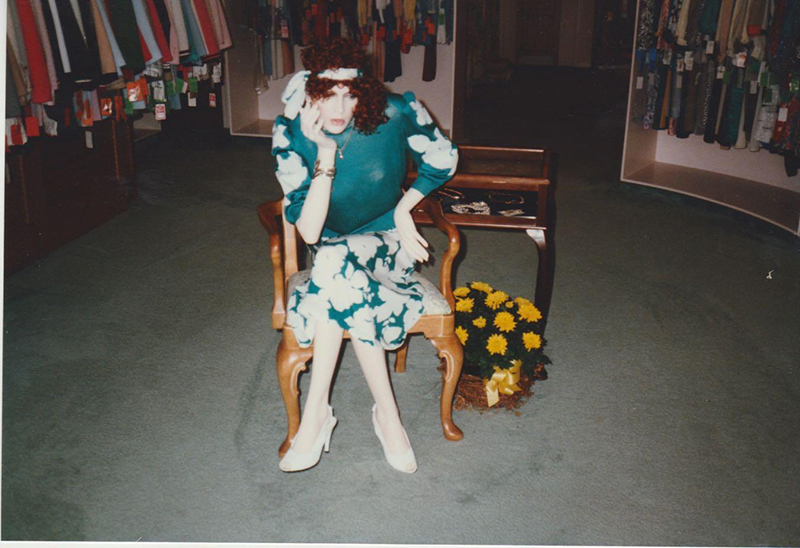 Fashions have changed, but the mannequin has remained the same over the decades at Nina Raynor. The store is in its 62nd season.
Photo provided

“We are thrilled the store was able to remain in Delray Beach,” Sauer said. “Local businesses are the fabric of a community. They are what make up the unique character of a town but also create a synergy that helps it thrive. For instance, there are people coming to the store that may not have had a reason to visit Delray previously. We direct them to restaurants for lunch or dinner, where to shop for shoes, order flowers, advise them of special events taking place, hotels to stay in. My brother is a huge advocate of promoting business in town, so much so we joke that he is the concierge of Delray.” The late Nina (pronounced NINE-ah) Raynor opened her eponymous boutique in 1958, offering a collection of resort clothing that was largely sportswear-driven. Wollenberg and Sauer’s mother, Joanne Wollenberg, purchased the business in 1983. She ran the store until her death in 2012.

Wollenberg said it was Joanne, a former fashion model, who established the shop as the destination for special occasion clothing.
“She was beautiful on the outside, but she was more beautiful inside,” Wollenberg said of his mother and mentor. “The customers adored her.”

From one millennium to the next, the boutique has helped women select designer clothing for important life events.

“What brings most women in for the first time is a special event. The No. 1 category is weddings, but the bar and bat mitzvahs are a close second,” he said. “Very often we will dress the mother of the bride, the mother of the groom and grandmothers for the same occasion. I would say 50% of the time we’re dressing both sides of the family. We try to make everyone look beautiful for the same occasion.”

Nina Raynor has customers who’ve shopped there for 50-plus years, Wollenberg said. In addition to its local devotees, the shop draws women from across North America. “We have a very large Canadian following and we’re deeply appreciative of that,” he said. 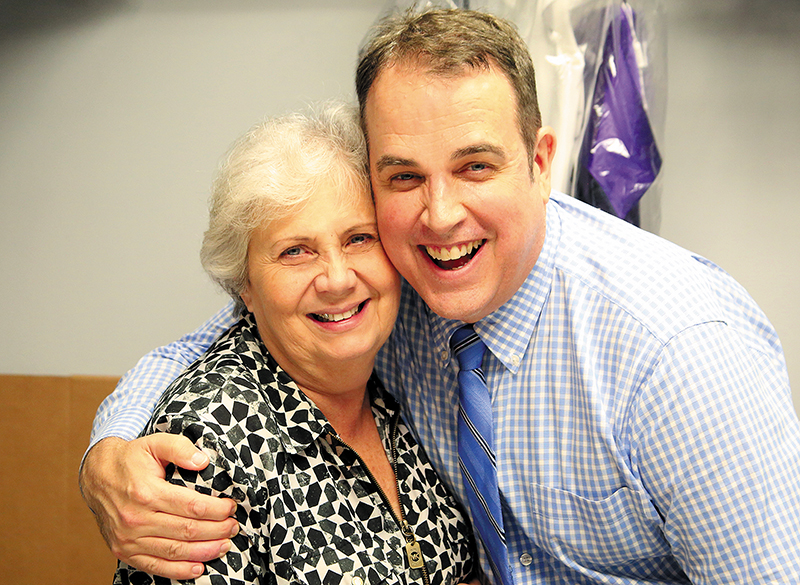 Stella, with Bobby Wollenberg, has been on the Nina Raynor team for over 30 years. Tim Stepien / The Coastal Star

When Gerry Ehrlich of Boca Raton walked past the shop’s signature topiaries and into the boutique for the first time, she was looking for a special occasion dress.

“I was just really impressed by the personal attention they gave to me — how they helped me to find something that not only suited me, but was the right size, color, that sort of thing,” she said. “And I think besides the attitude and the service and then the quality of what they offer, is the fact that if something doesn’t quite suit, if it doesn’t really fit you perfectly, they have a seamstress there … who with a little twitch here and a little tuck there can make something just look like it was made for you.”

Wollenberg said: “We’d rather not sell to you than to sell you something that, a) doesn’t look well on you, or b) that we know there’s already one at your party, your club, etc. Because that’s how you lose customers. We build relationships. We like to think that once you become a customer you’re part of the family.”

In the boutique’s showroom, elegant gowns hang at perfectly spaced intervals. Fabrics are sumptuous to the eye and touch. In the fashion trade, the feel of the fabric is called the “hand,” Wollenberg said.

“When I’m on a buying trip, it’s all about the fabrication. If the hand is not of a certain quality or caliber, then it wouldn’t be chosen for this store because our clients are quite particular — and should be. They’re very much into beautiful fabrications and that’s something we’re known for.”

The details on the dresses also are showstoppers. There are exotic birds hand-embroidered on tulle. Crystal jewel trim on black peau de soie. Beaded lace appliqué. A bodice swathed in hundreds of artistically arranged Swarovski crystals.

The shop features designers like Peggy Jennings, who has designed clothes for U.S. first ladies, and Catherine Regehr, known in part for using laser-cut fabrics that move like soft, kinetic sculptures. The shop is hosting trunk shows by these and other designers this season. The full schedule is available at www.ninaraynor.com.

In addition to its evening wear, the store carries accessories and what Wollenberg calls “nice casual” clothing. That’s one of the reasons longtime customer Carole Ann visits the shop.

“I don’t go to all that many formals, so I’ve bought a lot of my sports clothes there,” says the Boynton Beach resident, who asked to be identified only by her first names. “But the main thing about it is they’re very, very warm and friendly. And when you come in, they offer you a Coca-Cola or water. And at Christmas, Bobby’s sister bakes cookies for everybody. It’s that kind of a warm, family feeling.” 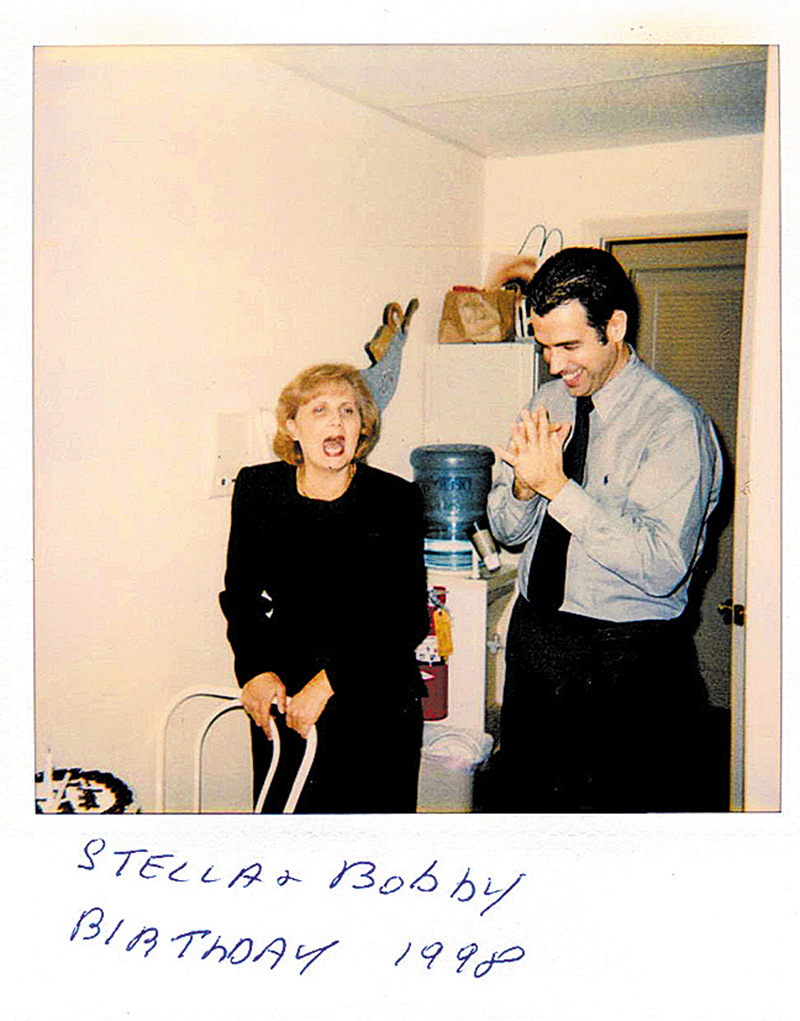 Stella and Bobby in 1998. Photo provided

In talking about the business, Wollenberg is hesitant to use the word staff. “We’re a team here, so they’re more like family to me,” he said of his associates. One of those family members is Stella, known to all by her first name, who’s been with Nina Raynor for more than 30 years. She “was my mom’s right arm,” he said.

“They are family-owned, provide true customer service and have become a destination for unique fashion and gowns,” she said. “We are thrilled that during their relocation process the decision was made to remain here in downtown Delray Beach and the DDA district. They are a piece of the fabric of the community and a part of our legacy as a small, family-owned business.” 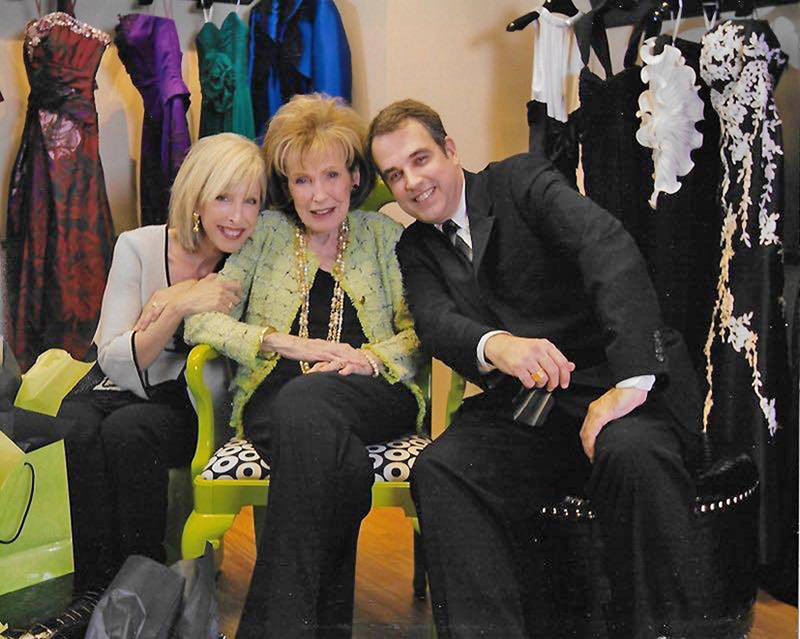 “Mom’s idea about the business was to treat each customer as a guest,” Wollenberg said. “Because without the customer there’s no store, and without a store, no one has a job. So, it’s all about the experience. … We just really try our best to make you feel welcome and special. … Just the fact that someone makes the effort to come here and wants to even look, I mean, that’s an honor.”