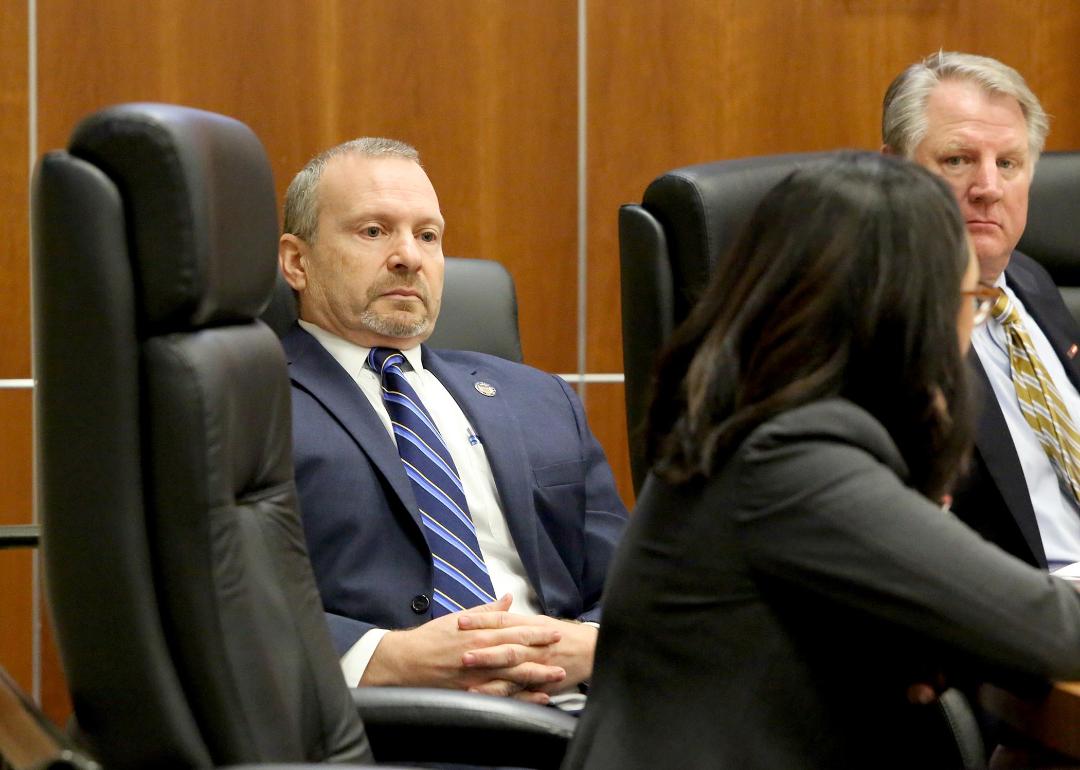 Delray Beach City Manager Mark Lauzier listens during a special meeting March 1 regarding the results of a report submitted to the commission by the city's internal auditor. Lauzier was terminated with cause after commissioners unanimously expressed a lack of trust in his performance. Tim Stepien/The Coastal Star

Delray Beach city commissioners unanimously fired City Manager Mark Lauzier for cause after hearing that he hired inexperienced employees, provided them with top-dollar salaries and moving expenses, and rewrote the personnel manual so that it did not cover his direct reports. The findings were part of a report by the city's internal auditor.

City commissioners were not aware of most of Lauzier’s management moves.

At the March 1 special meeting, Vice Mayor Adam Frankel appeared via Skype while on vacation. Deputy Vice Mayor Shirley Johnson arrived in a wheelchair because she was involved in a pedestrian accident and has a broken left knee.

After commission discussion, Frankel made the motion “to terminate Mr. Lauzier with full cause.”

Delray Beach police escorted Lauzier to his offices on the second floor after City Attorney Lynn Gelin asked him to step down from the dais. Lauzier was hired Nov. 6, 2017. He earned $244,000 annually.

Gelin recommended that commissioners appoint an interim city manager. Commissioner Ryan Boylston made the motion to appoint Fire Chief Neal de Jesus as the interim position. The fire chief agreed to serve as long as the term was limited to 90 days.

The commissioners agreed 4-0; Frankel had signed off Skype.

After he was named interim city manager, de Jesus sent a memo late that same evening to city commissioners detailing his first moves as interim city manager. He suspended without pay Assistant City Manager India Adams, Management Fellow Vincent Roberts and Executive Assistant Shona Smith. Susan Grant, recently hired as an assistant city manager, chose to resign. De Jesus told the city clerk, Katerri Johnson, that she can move back into her office. One of the assistant city managers had asked Johnson to vacate the office for her.  In addition, de Jesus promoted Duane D'Andrea from acting human services director to the department director.
Meeting drew emotional responses

Public comment was taken before internal auditor Julia Davidyan detailed her findings. The findings had been posted on the city's website only about one hour before the start of the 3:30 p.m. special meeting. Gelin asked Davidyan to write a cover sheet stating her report was technically a review, not an audit.

Of the 16 people who spoke during public comment, most talked about their emotional connection to Lauzier. They had not read the auditor’s report. More than half live in the northwest or southwest neighborhoods.

“Take into consideration that his life is on the line,” said Timothy Boykins. “Have a heart.”

Former Commissioner Chard said, “The man is a student of cities.” Chard was on the commission that hired Lauzier.

“He had that people personality we all look for,” Odom said. “But if he’s done something so egregious, then fire him.”

Gelin said Lauzier had made “multiple violations of the city charter and the International City Managers Association’s code of ethics.” That behavior, she said, “supports termination with cause.”

The internal auditor position was approved by city voters in a 2016 referendum and reports directly to the commission.

Davidyan, who was hired in August 2018, never met with Lauzier despite repeated attempts on her part but said red flags were raised earlier this year. She noticed that several department head positions were open, Lauzier declared a partial hiring freeze in late January and two weeks later announced he hired his third assistant city manager.

That’s when she began to look into Lauzier’s operation, Davidyan said. According to her report:

*Shortly after being hired, Lauzier rewrote the personnel manual so that it did not cover his direct reports, including executive staff in his office and the department heads. He did not update the city charter as was required or post the changes. Only Lauzier signed the updated policy; the mayor did not (as is required by the charter).

*In January 2018, Lauzier hired India Adams to be assistant to the city manager. He worked with her in Tacoma, Wash. Adams listed one year experience as a management analyst II and two years of intern/fellowship experience on her resume. She did not list any supervisory or management experience and did not have any experience with budgets or special projects.

At the time, Lauzier said the job was “a downward classification of the vacant assistant city manager position at a substantial savings.” Adams was paid $82,492 annually plus benefits when first brought on staff.

*On March 29, 2018, Lauzier hired Vince Roberts, with a master’s degree in public administration from the University of North Carolina, at an annual salary of $53,174, with a maximum of $3,800 in moving expenses and $1,200 in housing assistance. Roberts also received full city benefits.

That salary was 27.5 percent above the position’s minimum grade guidelines. Adams justified paying the increased salary in a memo that cited Roberts’ education and experience “serving multiple localities.” Roberts, though, listed only one three-month internship on his resume. The city's policy is to start people at the minimum salary grade.

*On May 1, the City Commission approved allowing Lauzier to change the personnel policies and procedures manual. He did not mention that his direct reports were not included.

*On Aug. 1, Lauzier promoted Adams to assistant city manager, increasing her salary to $120,000, more than a 45 percent increase. The promotion was not done as part of an annual performance appraisal. The City Commission learned about the promotion in a July 31 memo when Lauzier released a revised organizational chart.

Adams did not have the required five years of experience for the position. The “substantial savings” Lauzier had touted seven months before were eliminated with her promotion.

Lauzier frequently has said Adams would take over for him in eight years when he retires.

*On Jan. 30, while the city had a partial hiring freeze, Lauzier hired another assistant city manager, Susan Grant from Coral Springs. Grant's position oversaw finance, human resources, purchasing and information technology. According to the auditor's report this presented a possible conflict because the human resources director usually reports to the city manager. Lauzier never told the commissioners about the hiring freeze.

*On Feb. 5, Human Resources Director Sharon Liebowitz, who had reported directly to Lauzier, resigned. Davidyan could not confirm the reason for Liebowitz’s departure. Her personnel file did not contain a memo outlining why she left.

The report also said the organizational chart shows a city manager’s office that is top heavy with four assistants. At approximately $160,000 per assistant, that equates to a $640,000 payroll.

The changes in the personnel policies and procedures allowed Lauzier not to follow the usual method for selecting his direct hires, such as the recent hiring of the police chief.

Lauzier kept police, fire rescue, parks and recreation, communications and media, and neighborhood and community services under his direct supervision.

After hearing the auditor's report, Lauzier had his say.

“I have not violated any code of ethics,” he said, adding that he took over a city in chaos.

He defended Adams “as the most talented management fellow, who proved herself in the mettle. People have a problem with excellence.”

He asked for time to respond to the report or to allow him to work up an amicable separation agreement with the city attorney that could be reviewed at the regular March 12 commission meeting.

“It’s not appropriate to attack my staff and me and call me incompetent,” Lauzier said.

He ended his 15-minute speech by saying, “I love you guys (to the commissioners) and I love this city.”

The county Office of the Inspector General has requested a copy of Davidyan’s findings for review, Gelin said.