Delray Beach officials have known for more than 12 years what was required to implement a safe reclaimed water project, according to July 2008 letters between the city’s Utilities Department and Florida Department of Health in Palm Beach County.
In fact, the city’s water rules remain part of its code of ordinances today. These rules explain how the city will protect its public water supply while offering reclaimed water for irrigation.
This knowledge and failure to implement its own plan may end up costing Delray Beach nearly $3 million in fines for not inspecting, maintaining and keeping records of its reclaimed water installations.
The Department of Health called the violations “willful or intentional in nature” in its draft Jan. 7 letter to the Delray Beach interim city manager.
The year 2008 was five city managers ago, when none of the current commissioners sat on the dais.
The proposed fines couldn’t come at a worse time. Delray Beach had been plugging holes in its budget for nearly a year when the pandemic shut restaurants, bars and hotels in mid-March 2020.
In September, the city balanced this financial year’s $151.4 million budget by taking $5.2 million from reserves to pay for one-time expenses, leaving about $38.5 million in reserves. At the same time, Delray Beach spent slightly more than $1 million from its Utilities Department budget to fix the reclaimed water program.
The Health Department is expected to complete its review and determine the fine amount in another month or so, which the city can appeal to an administrative judge.
In the draft Jan. 7 letter, called a Civil Penalty Authorization Memo, the county director for the state Health Department said that Delray Beach had adopted a “Cross Connection/Backflow Prevention Program” on July 2, 2008.
“The City then failed to follow its plan,” wrote Dr. Alina Alonso, the director.
The letter also noted Delray Beach benefited financially by not implementing its plan to the detriment of its “residents’ health and welfare.”
“The City benefited from saving money through the years by avoiding or delaying the costs of compliance,” Alexander Shaw, Health Department spokesman, said in a Jan. 28 email to The Coastal Star.
The letter covers 11 potential violations. 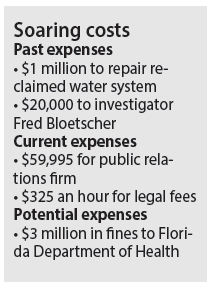 A notice for customers
In mid-January, the Health Department leaders sent the draft letter of the proposed violations and a consent order to their Environmental Protection counterparts in West Palm Beach and Tallahassee for review.
The consent order is an agreement between the Health Department and Delray Beach over its reclaimed water program. The order still has to be reviewed by a judge.
As part of the proposed consent order, Delray Beach would be required to issue this public notice: “The City of Delray Beach cannot assure utility customers that the drinking water produced and distributed met the standards of the Safe Water Drinking Act for the period from inception of the reclaimed water service beginning in 2007 to the time reclaimed water was deactivated on February 4, 2020.”
On Aug. 10, the city emailed its residents saying Delray Beach potable water is safe to drink and meets all quality standards set by the state Health and Environmental Protection departments and the U.S. EPA.
The city and the state health officials have been in discussions all along.
Jennifer Alvarez, the interim city manager, told commissioners at their Jan. 19 meeting that Health Department leaders would talk again with the city before the violations are made final and that she promised to meet individually with the commissioners.
“The Department, as a courtesy, will notify the city prior to emailing the consent order,” wrote Shaw, the department spokesman.

‘Unable to refute’ charges
On Jan. 2, 2020, a South Ocean Boulevard homeowner called the department to say she was not adequately informed about a cross connection found at her house in December 2018.
The complaint triggered a Health Department investigation into the city’s reclaimed water program that has lasted more than a year.
On Feb. 4, 2020, the city was forced to turn off its reclaimed water system to avoid a citywide boil-water order triggered by the resident’s complaint. The system was turned back on in phases, with 90% of the service restored by the end of June.
Delray Beach’s Utilities Department hired inspectors to review each reclaimed water location for cross connections.
Then the city examined each site for backflow preventers. It found that 194 backflow devices had not been installed on the barrier island.
Delray Beach has used outside contractors to design, build and inspect the reclaimed water system. In the last area of the barrier island where reclaimed water was installed, 21 of 156 locations did not have backflow preventers.
Most of the city’s contracts called for the city to provide the backflow preventers and have a dedicated staff member inspect their installations. That employee, called a cross connection specialist, was supposed to work alongside a representative of the firm hired to do the final inspections.
Various utilities employees had this inspection work as part of their job duties, but no one was hired solely to do the inspections.
In early May, then-City Manager George Gretsas said the program was botched from its start in 2007. Eight weeks later, in late June, the City Commission suspended Gretsas for allegedly bullying an employee over the reclaimed water problems.
The commission fired him in November over other misconduct charges. Gretsas has received more than $150,000 in salary and benefits since he was suspended in June.
On July 1, the Health Department sent a warning letter to the city, listing 13 possible water violations. During a July 22 meeting between the Health Department and city leaders to discuss the regulatory concerns, “the city staff stated that while they were not at the city when all of the violations occurred, they were unable to refute any of the allegations in the warning letter,” according to the draft penalty letter.
In April, the city hired a firm to do a forensic study of its reclaimed water system. The city paid $20,000 for a report that was supposed to include determining responsibility for installing and inspecting the backflow devices.
The investigator, Fred Bloetscher, president of Public Utility Management & Planning Services Inc., did not find a culprit because of the limited records the city gave him. Instead, according to his Oct. 23 report, Bloetscher found that Delray Beach did not have a point person in charge and lacked “institutional control” over the reclaimed water system.
“To complicate the problem, the City cannot test the majority of the current backflow devices because they … are buried,” Bloetscher wrote in a Jan. 27 email to The Coastal Star. “Backflow devices should be located above ground to prevent cross connections with stormwater/flooding.”
Meanwhile, in the summer months of July through September, the Utilities Department paid a vendor $2,945 to remove reclaimed water meters from four oceanfront properties, including one Ocean Boulevard property where a cross connection was found in April.
The city passed an ordinance in 2007 making it mandatory to connect to reclaimed water if lines are laid nearby. It was unclear why these meters were removed.
The city also has hired outside counsel as it goes through the Health Department investigation process. The Lewis, Longman & Walker law firm was hired in mid-December to advise and represent the city in the reclaimed water investigation and pending enforcement action by the Health Department and by the state DEP regarding alleged potable water system violations. The firm’s governmental rate is $325 an hour. Alfred Malefatto, an environmental law attorney in the firm’s West Palm Beach office, and Frederick Aschauer in the Tallahassee office will represent Delray Beach. Aschauer specializes in environmental regulation and agency enforcement of permits.