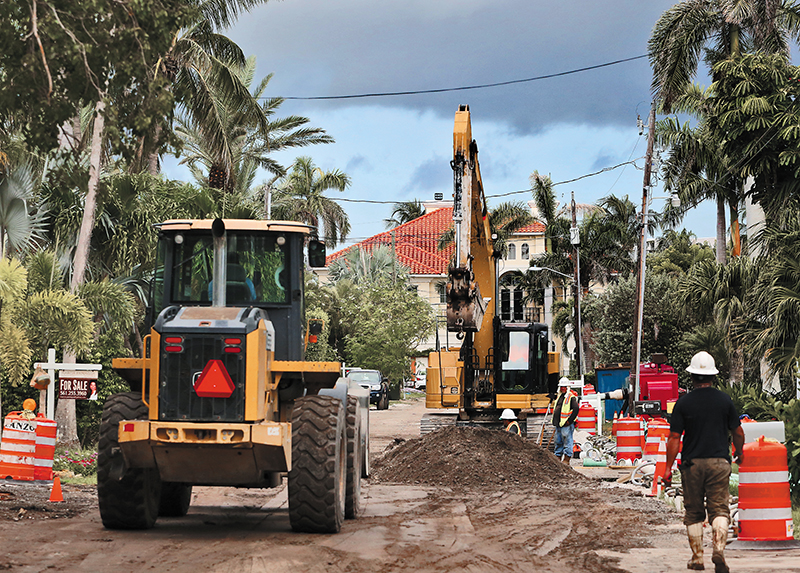 Patience, cars among casualties, with some relief due by October

An easy 2-mile drive for Cohen, who works at the Lang Realty office on East Atlantic Avenue, right?

A1A is often down to one lane south of Casuarina Road due to water main work, but Rhodes Villa Avenue is ground zero.

The once tranquil street, flanked by million-dollar homes with boats docked out back, now resembles a disaster zone.

For four months, anyone trying to navigate Rhodes Villa — and four nearby streets in southeast Delray Beach — has had to dodge ruts, trenches, pooled water, bulldozers, excavators and dump trucks during a $4 million project to install new reclaimed water and sewer lines.

When the project is finished, stormwater drainage will be improved, reclaimed water will be available for irrigation and new fire hydrants will be installed.

Cohen, a Realtor, can’t wait for work to finish. “I’m scared to drive down the street. I worry that my car will get stuck in the mud,” she said last month. “My car is getting filthy.”

She drives a BMW, which she likes to keep shiny clean to ferry prospective luxury home buyers.

Her ex-husband took his family out of town for a month, hoping the roadwork would be finished by the time he returned in late August. 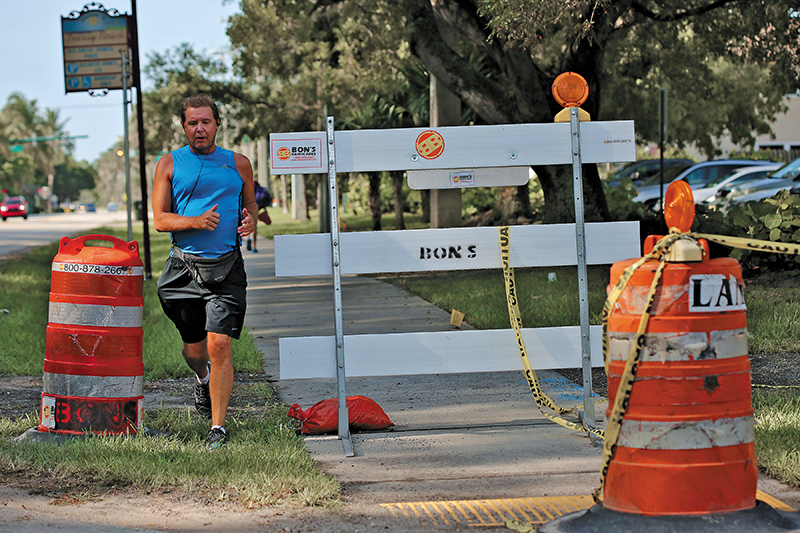 Cohen is not alone in her dismay.

“It’s been a freaking nightmare,” resident Joy Buckley said in a phone interview. “Our cars and shoes are filthy. They were supposed to fill in potholes, but they didn’t. It’s treacherous for people riding bikes and pushing strollers.”

“We understand the inconvenience to each and every resident that this type of project includes,” Missie Barletto, assistant director of the city’s Public Works department, said in an email. “Once the project is completed, each property will have access to the city’s reclaimed water system, which has cost and usage benefits for irrigation. They will have a new road, an upgraded potable water system and drainage improvements to mitigate flooding.”

The barrier island reclaimed water installations, which started in 2012 and include all of the city’s neighborhoods east of the Intracoastal, will be finished later this year once this final section of the project is completed and residents can begin using reclaimed water.

Barletto said the work is supposed to be “substantially completed” by Oct. 7, with final completion Dec. 6.

Lanzo Construction Co., the contractor, met the Aug. 15 deadline set by a water-district grant for the reclaimed water lines, Barletto wrote. Delray Beach received a $400,000 grant to supply reclaimed water to the area.

The city knew it would be messy, so it held two open houses — the first in April 2017 and the other in January — to describe the project to residents. Only four showed up for the events, Barletto wrote. The contractor’s workers also distributed contact information for project updates and the city provided weekly advisories on Twitter and Facebook.

All five streets in the project area flood during extreme high tide events. The contractor is upgrading the stormwater system on each street, adding extra pipes and catch basins to direct runoff to the Intracoastal Waterway. There will also be valves installed at outfalls to deter water from pushing up through the storm grates.

But, Barletto noted, while this work will improve stormwater management, it will not prevent flooding completely if water overtops the seawalls. 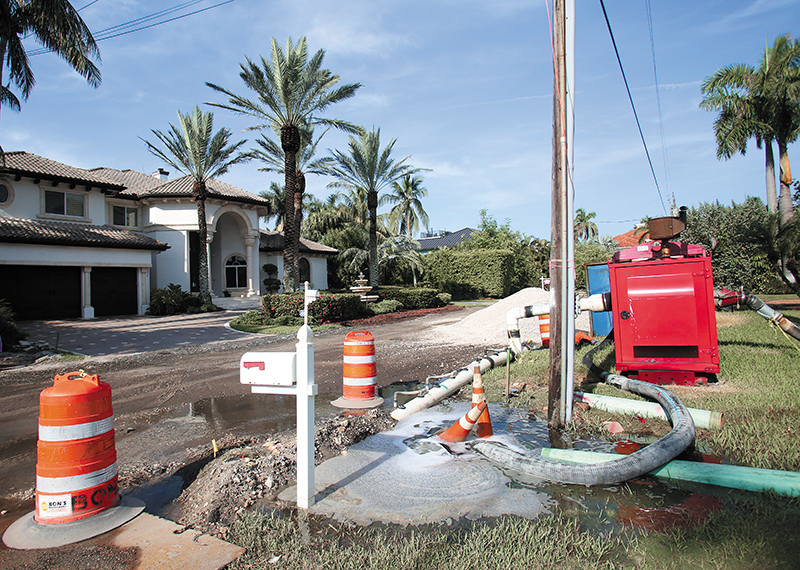 Pumps push ground water on Rhodes Villa Avenue into a filter before release into the Intracoastal. Tim Stepien/The Coastal Star

In order to dig the trenches, workers needed to use large sedimentation tanks to store ground water. Because of construction debris, the water had to be filtered before it was released into the Intracoastal Waterway. It was a precarious balance, and sometimes, residents said, a sewage smell emanated from the tanks.

At one point in early August, the city asked residents to refrain from using dishwashers, taking showers and washing their clothes between 7 a.m. and 5 p.m.

In May, when it was raining nearly every day, Rhodes Villa Avenue resident Glen Urquhart was returning from church in a rainstorm and his new Mercedes stalled in standing water, but not before the turbocharger sucked water into his engine and destroyed it, Urquhart said in a phone interview. He was told he needed a new hand-built engine, costing $90,000.

Urquhart wants to be reimbursed for the cost of the new engine, his $1,000 deductible and loss of use of his Mercedes for 2½ months.

If the damage to Urquhart’s vehicle was the result of construction activities, he would need to submit a claim to the contractor, according to Barletto.

“Any valid claim of damages will be the responsibility of the contractor,” she wrote.

Realtor Cohen said the area’s luxury home market was destroyed for the summer. “Who would come to buy a house in these conditions?” she asked.

Two other residential brokers, Steven Presson of Corcoran and Pascal Liguori of Pascal Liguori & Son, agreed with her in the short-term. But they also see a solid future for luxury home sales in coastal Delray Beach.

“Ultimately, the improvements are very positive and will benefit home values,” Presson said.

Added Liguori, “It shows Delray Beach is taking care of its infrastructure.”