Delray Beach drinking water customers on the barrier island are likely to see fewer disruptions to their service once a yearlong $1.8 million project wraps up this summer to replace or strengthen 40-year-old water mains below the Intracoastal Waterway. 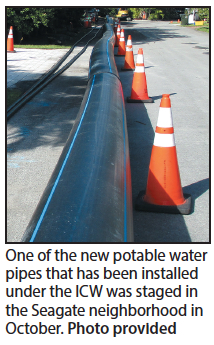 Over the past five years, the city’s utilities department has experienced several water main leaks requiring emergency repairs on the four aging pipes under the Intracoastal.
In an effort to improve the effectiveness of those pipes and reduce the need for unexpected and sometimes costly fixes, the city in May 2020 gave construction crews the green light to add two larger pipes under the waterway and potentially line three existing smaller pipes for backups or future use.
The ductile iron pipe material “has anti-corrosive properties. However, given the full saltwater installation and the age of the pipes, these pipes are past their useful service life,” then Deputy Director of Utilities Victor Majtenyi wrote in a March 3, 2020, memo to city commissioners.
As part of the project, two 12-inch iron pipes — a 500-foot line from Northeast Fourth Street to Beach Drive and an 800-foot line from Southeast Eighth Street to Bauhinia Road — have already been replaced with 16-inch high density polyethylene pipes.
Those pipes were assembled above ground on one side of the Intracoastal Waterway and then pulled under the water in a pre-drilled path.
Two 12-inch pipes, which remain 10 to 12 feet below the Intracoastal Waterway, will be lined if video camera results determine feasibility. Another 12-inch pipe from Dogwood Drive to State Road A1A — south of Linton Boulevard — will also be lined if practical.
Video inspection of all three 12-inch mains is expected to be completed by the end of May and the project is scheduled to be completed by the end of July.
“Once completed the work being done on this project will be invisible to residents and visitors, but it is an important part of the city’s continued commitment to improving and maintaining its infrastructure in order to provide safe and reliable water to our customers,” city spokeswoman Gina Carter said.
A fourth water main under the Intracoastal, from Southeast First Street to MacFarlane Drive, was not included in the project due to easement issues. It is expected to be included in future projects.
The mains bring treated water from the city treatment plant just west of Swinton Avenue.
Also not included in the project are pipes carrying reclaimed water for irrigation to the barrier island from the South Central Regional Wastewater Treatment plant on Congress Avenue at the Boynton Beach and Delray Beach border.