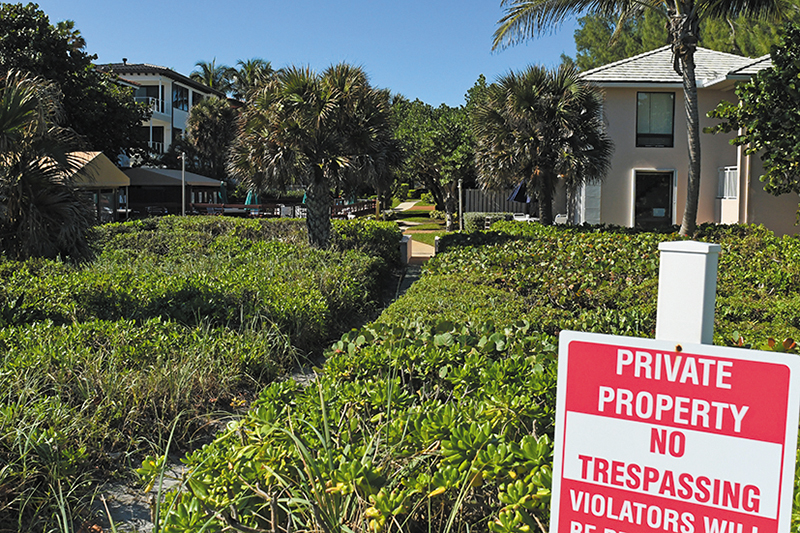 Four owners are fighting the sale of the Delray South Shore Club, a timeshare that closed in January. Jerry Lower/The Coastal Star

The cozy 15-unit timeshare closed its doors the Saturday after New Year’s, employees were terminated, and security guards started patrolling the grounds pending the resort’s sale to a Pennsylvania-based developer.
Owners of most of the 765 timeshare weeks at the Delray South Shore Club are no doubt looking forward to the estimated $16,078 payout for each week they owned at the beachside complex.
But four owners, who collectively have seven weeks, are continuing a legal battle to undo the 498-156 vote to sell the resort, alleging that they and fellow unit owners were duped by misleading information and “scare tactics” from the timeshare’s board of directors, maneuvers they say will lead to windfall profits for two directors who live nearby.
“It’s frustrating for us knowing what is happening and being unable to educate the other owners as well as work through the slow legal system,” said Jacqui Derrick, one of the plaintiffs in the lawsuit filed in Palm Beach County Circuit Court.
The suit originally sought to block the Aug. 5 vote authorizing the sale of the complex at 1625 S. Ocean Blvd.; it was amended to focus on alleged breach of contract by the timeshare association and alleged breach of fiduciary duty by the two directors, barrier island residents Kenneth MacNamee and Robert Deutsch.
“It’s a real family place, and it’s really important that the city of Delray, and other places too, know what these jerks are doing,” co-plaintiff John Runyon of Minnesota said.

Derrick and her husband, Bob, also a plaintiff, live about an hour’s drive from Atlanta and own four timeshare weeks. William Miller of Boca Raton is the fourth plaintiff.
In their lawsuit they assert that the resort’s Declaration of Condominium requires unanimous consent of all unit owners to terminate the timeshare.
Members of the board of directors, who are now called termination trustees following the dissolution of the timeshare, assured the other owners that their attorney, Seth Kolton, is “vigorously defending against the plaintiffs’ baseless claims.”
Kolton argued that the lawsuit should be dismissed partly because MacNamee and Deutsch as members of the board of directors are statutorily immune from personal liability. But Circuit Judge Howard Coates Jr. denied Kolton’s motion on Dec. 20.
MacNamee would tell The Coastal Star little about the case.
“As the defendant in the lawsuit, I look forward to my day in court to set the record straight. Until then, I have ‘no comment,’ ” he said in an email. 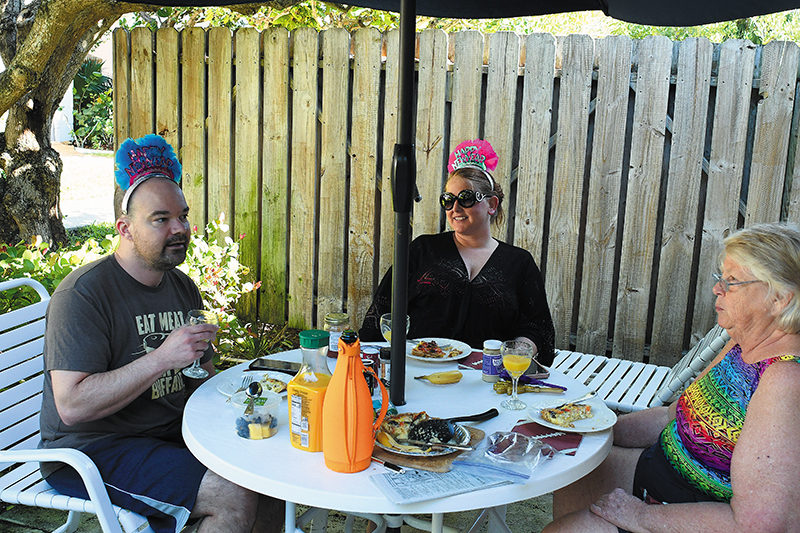 ABOVE: Sara Clendenin, 32, who had been coming to the Delray South Shore Club since she was in her mother’s womb, makes a final visit with her boyfriend, Dan Sophie, and her mother, Pat. BELOW: Arlene Stuckenbrock of Chicago and Reed Owen sip Bloody Marys. Stuckenbrock had been coming to the timeshare since 1982. Photos by Jerry Lower/The Coastal Star 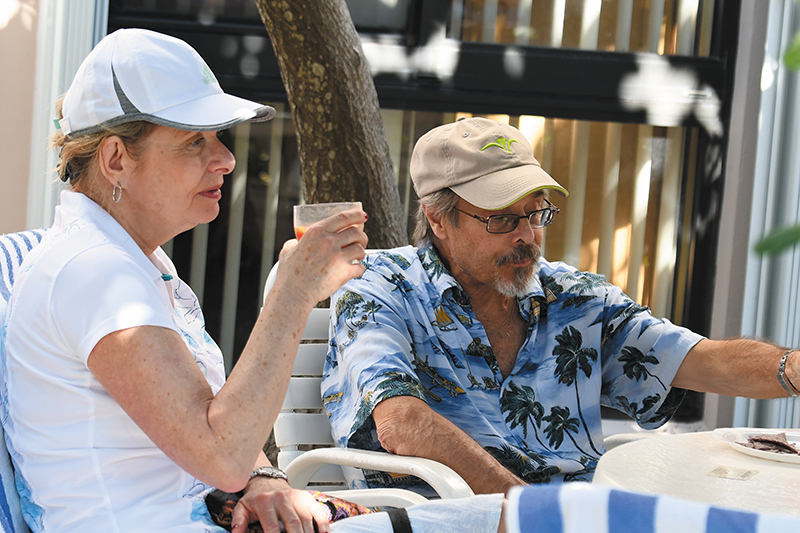 MacNamee and Deutsch won seats to the seven-member board in November 2018, the same month they learned they had won a sealed-bid auction arranged by the board to buy 23 association-owned weeks.
Paul Widemer, a former director, questioned MacNamee’s and Deutsch’s qualifications to be directors before the election, saying MacNamee “does excel in being disruptive and obnoxious.”
MacNamee, who lives on a canal three lots off the Intracoastal Waterway, then went to Widemer’s home in Lantana and took pictures. “I don’t know your business background and acumen,” he replied to the 86-year-old widower’s email, “but given your domicile situation, you don’t appear to have been very successful, certainly not in my league.”
The board president sent copies of the email exchange to all owners.
Last February the board notified unit owners that the association had received two unsolicited offers to purchase Delray South Shore. In the same mailing, the board posed a one-question survey: “Do you have any interest in selling Delray South Shore Club? Yes or No.”
The board says “a majority of owners responding to the survey” expressed interest in selling, by its count 272-260. But the plaintiff owners insist the outcome is reversed if you subtract the 23 votes MacNamee and Deutsch acquired in the November auction.
In the subsequent Aug. 5 vote, owners were asked whether to terminate the timeshare and warned of future renovations of up to $2 million.
The board’s mailer stated the case this way: “Simply stated, if the vote passes: DSSC will be sold, and you as an owner in good standing will receive approximately $16,000 for each week that you own. … If the vote fails: You as an owner will likely have an additional expense of $2,000-$2,500 per week that you own, which may be spread over a few years.”
MacNamee first invested in Delray South Shore in 1984 and by 2011 he and his wife, Mary, had acquired a total of eight weeks for $22,548, according to the plaintiffs’ research of property records.
They bought seven more weeks for $3,500 on March 6, 2018, and sold one the next day to Deutsch for $1,000. MacNamee added another week to his holdings that July for $10.
Deutsch’s purchase qualified him to run for a seat on the board that fall. In the association’s November auction MacNamee bought six weeks for $4,560 and Deutsch bought 17 weeks for $11,725, the plaintiffs say.
They also find it suspicious that four of the eight auction winners were on the board of directors.
By their math, MacNamee stands to get $337,638 for his $29,618 investment while Deutsch will convert his $12,725 of timeshare weeks into $289,404.
A subsidiary of U.S. Construction Inc., the Philadelphia firm that bought the Wright-by-the-Sea hotel for $25 million in 2018, submitted the $12.3 million winning offer for Delray South Shore. The lawsuit delayed the deal’s planned Jan. 6 closing.
The other offer, for not as much, came from Delray Beach-based Seaside Builders LLC.
U.S. Construction is also a partner in developing Gulf Stream Views, a 14-townhome project just south of Briny Breezes.
The plaintiffs’ lawsuit says MacNamee and Deutsch breached their fiduciary duty “by knowingly, intentionally and maliciously promoting the sale of the association and self-dealing only to seek a windfall profit from their recent activity of purchasing … many foreclosed units within the association well below market value.”
Jacqui Derrick grieves over the loss of “the average man’s vacation beachside resort” and fears Berkshire by the Sea, at 126 N. Ocean Blvd., may be the next target of developers. The Berkshire board of directors notified owners in 2016 that its timeshare ownership arrangement would expire in 2021 unless they amended the bylaws, “just like what our BOD did to us with the same type of wording. Interesting.”
Runyon, 74, bought his two timeshare weeks in 1999 for $5,000 each and faithfully paid his maintenance fee, which he said was $749 a week last year.
“My goal is to preserve Delray South Shore,” he said. “To those of us who don’t see it the way the speculators see it, this is Florida of the ’80s.”
During the timeshare’s final week, guests basked in the sun, walked the beach and congregated in the cabana, but the mood was bittersweet.
“I love this place,” said Sara Clendenin, 32, of St. Louis, who first visited the timeshare while in her mother’s womb. “We come here every year and know all of the people here. They’re like a whole ’nother family you get to see each year.”
Nancy Fooks from New York, who came on New Year’s Day to say goodbye to the friends and the place, admitted she had been crying over its looming closure.
And Arlene Stuckenbrock of Chicago, who had been visiting the club since 1982, recalled watching her son playing as a child from her patio seat.
“I always had the 52nd week of the year, and sometimes the first week of the year. I won’t be able to do that anymore,” she lamented.