The Delray Beach Playhouse, founded in 1947, moved to its current location along Lake Ida in 1958. Pictured is a set from a production in those early years, probably late 1950s. The second of four main productions this season at the venue opens Jan. 28. Photo provided 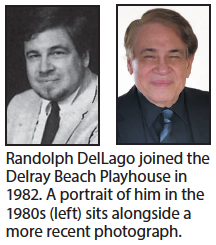 That was in May 1982, and the Delray Beach Playhouse was already 35 years old.
This year, DelLago, 74, is marking 40 years as its artistic director, and the playhouse is celebrating 75.
How does a community theater survive and thrive for three-quarters of a century?
Community, of course.
From that day in 1947 when a group of men and women gathered in the St. Paul’s Episcopal Church parish hall to talk about putting on amateur plays, enthusiastic volunteers have been the theater’s life force.
“Amateur means ‘for the love,’” DelLago notes, “and to survive for 75 years in South Florida shows a commitment to a level of quality because we’re so dependent on amateur volunteer talent.”
Eventually, the amateurs outgrew those early one-act plays performed on a tiny stage in the parish hall. They moved to the city’s Civic Center, dared to tackle five productions during each five-month winter season, and became the “Little Theater of Delray Beach.” In 1957, construction began on a permanent building in Lake Ida Park. Robert Blake, an amateur actor and professional architect, designed the building. Again, volunteers provided much of the carpentry, painting and installation, and in January 1958 the ribbon was cut and the curtain came up on The Philadelphia Story.
The theater’s windows were covered with plastic sheeting to keep out the cold, so when the winter winds blew, the sheeting rattled audibly. The restroom doors opened on the auditorium, so whenever nature drove a theatergoer to seek relief in mid-act, the restroom light flooded the auditorium.
There was no heating and no air conditioning. ABOVE: The playhouse opened in 1958 in its current location along Lake Ida. ABOVE RIGHT: Delray Beach Playhouse organizers cut the ribbon on the theater in 1958.

But the Little Theater was now the Delray Beach Playhouse, and over time air conditioning arrived, as well as a lobby, dressing rooms and a children’s theater workshop.
And the restrooms no longer opened on the auditorium.
When DelLago arrived from Wilmington, North Carolina, in 1982, he already had an acting job waiting, playing Claudius in an Oklahoma City production of Hamlet. In the meantime, he’d accepted a one-time job guest directing at the Delray Beach Playhouse.
He chose Arsenic & Old Lace, the beloved farce about two elderly spinsters who poison 12 lonely old men with elderberry wine spiked with arsenic, then bury the bodies in their Brooklyn basement.
The victims are never seen during the play, but DelLago persuaded 12 local volunteers to don green makeup and eyeshade each night and join the cast for the curtain call.
“You couldn’t do that in a professional theater,” he points out. “Union rules would require that each of the corpses be paid.”
The play was such a success DelLago was asked to remain as the permanent artistic director. Oklahoma lost a Claudius, and the rest is local community theater history.
Since then, the playhouse has maintained its original vision of presenting five productions each season, a tradition interrupted briefly by the coronavirus threat, when part of the 2020-2021 season was presented as prerecorded online productions. The Delray Beach Playhouse, seen in recent years, now has a capacity of 238 seats.

“I’m just sorry our 75th anniversary is taking place at a time when some are still not comfortable coming to the theater,” DelLago says.
This will be a four-show season. In addition to A Spider’s Web, which closed Dec. 19, and Respect: A Musical Journey of Women, opening Jan. 28, the playhouse will present Deathtrap in March and Same Time, Next Year in April.
But other shows go on, with matinees of one-act plays, lectures, a separate theater and stage for children’s productions, and the popular “Musical Memories” series, in which DelLago introduces audiences to the works of Broadway composers, accompanied by professional singers.
The tiny stage in the church hall is long past, and DelLago has no intention of leaving any time soon.
“I can’t imagine retirement,” he says. “To have done what I love all these years is an amazing gift. How many people get paid to do what they would do for free?”