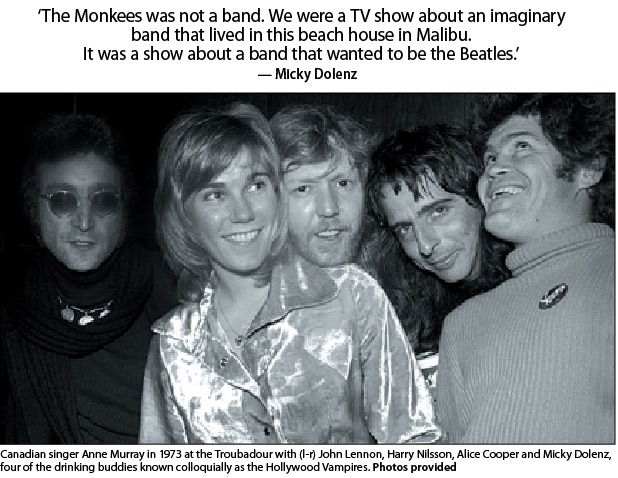 When the last surviving Monkee was told he’d have to play a Beatles song or two if he wanted to headline the International Beatles on the Beach Festival in Delray Beach, he was happy to oblige.
“I like to try and support the old bands nobody hears about anymore,” Micky Dolenz says. “My mother and grandmother were big fans of the Beatles, and you never hear about them anymore. I like to support those bands from the distant past.”
He’s joking, of course. The Monkees always got the joke, even when their harshest critics didn’t.
When Dolenz and his five-piece band take the stage Dec. 16 at the Old School Square Pavilion, he’ll sing Last Train to Clarksville, Daydream Believer and all the Monkees’ greatest hits, but you’ll hear some Beatles, too. Micky Dolenz, now 77, says he will play a few Beatles songs when he performs at the International Beatles on the Beach Festival, on Dec. 16 in Delray Beach.

“I do a bit of ‘Sgt. Pepper’ and ‘Oh! Darling,’” he says. “I’ve done them over the years. I was an enormous fan, a huge, huge fan.”
But a Monkee? At a Beatles festival?
Imagine.
Back in 1966, both the Monkees’ TV show and their records were big hits, but to rock snobs they were the Rodney Dangerfield of pop. They got no respect.
The Beatles were the Fab Four, the Monkees were the Pre-Fab Four.
The Beatles had played together for years. The Monkees were actors, hired by men in suits for an NBC sitcom.
The Beatles had John Lennon and Paul McCartney writing their own songs. The Monkees had veteran tunesmiths like Tommy Boyce, Bobby Hart and Neil Diamond writing theirs.
The Beatles played their own instruments. The Monkees’ early albums were backed by studio musicians.
The Beatles were gods, the Monkees were frauds.
But that was 56 years ago. Davy Jones, Mike Nesmith and Peter Tork are dead now, leaving only Micky Dolenz to say again what they’d all said all along.
“The Monkees was not a band,” he explains. “We were a TV show about an imaginary band that lived in this beach house in Malibu. It was a show about a band that wanted to be the Beatles.”
A good comparison, he suggests, is Glee.
“That was a show about an imaginary glee club at a high school, but the actors were singers and dancers. You wouldn’t call them a manufactured glee club.” From Circus Boy to Monkee
Dolenz was already an established actor when he auditioned to be a Monkee. In the mid-1950s, he starred in Circus Boy, a TV series about an orphan traveling with a turn-of-the-century show. He called himself Mickey Braddock then, because his father, George Dolenz, was already starring in The Count of Monte Cristo series.
“To get an audition for the Monkees, you had to be able to read lines and act,” he remembers, “but you also had to be able to play an instrument. I played ‘Johnny B. Goode’ on guitar.”
Tork and Nesmith played guitar, too, so Dolenz, who didn’t play drums, was ordained the drummer. He took lessons, learned to mime along with the prerecorded tracks, and then to really play when the band began touring.
“We were not America’s answer to the Beatles,” he says. “Our fans were the younger brothers and sisters of the Beatle fans.”
On Feb. 9, 1964, when the Beatles made their American debut on The Ed Sullivan Show, Dolenz was sitting in his black 1962 Grand Prix at a Bob’s Big Boy in Van Nuys, California.
“A friend of mine had a little portable, black and white TV with rabbit ears that you plugged into the cigarette lighter,” he remembers, “so we watched them while having burgers.”
On that same show, Dolenz might well have heard a young actor sing a song from the hit Broadway musical Oliver. His name was Davy Jones and a year later they would be Monkees together.
“I was the first Monkee to meet a Beatle,” Dolenz says, “at Paul’s house. We had a lovely dinner and Paul was very gracious. We just sat and chatted and he invited me to a recording session at Abbey Road Studios.”
Dolenz arrived expecting a Beatlemania love-in funfest.
“So, I dressed accordingly in my paisley bell-bottoms and tie-dye underwear, glasses and beads. Limo picked me up. I walk in and there’s nobody there except four guys in folding chairs. It looked like my high school gym, and I looked like a cross between Ronald McDonald and Charlie Manson.”
John Lennon glanced up at him and said, “Hey, Monkee man, want to hear what we’re working on?”
They were working on a Lennon tune called Good Morning Good Morning, which wound up on their masterpiece, the Sgt. Pepper’s Lonely Hearts Club Band album.
Years later, the two partied together in Los Angeles during Lennon’s infamous drug- and alcohol-addled “lost weekend.”
“I’m told I enjoyed myself,” Dolenz says dryly. The Beatles got the joke
If Beatle snobs snubbed the Monkees, the Beatles clearly didn’t. In March 1968, viewers saw an episode, written and directed by Dolenz, that began with the four Monkees being awakened by a Rube Goldberg alarm clock that played a tune.
It was the Beatles, singing Good Morning Good Morning.
“It was the first time the Beatles gave anyone permission to use any of their songs, and for no money,” Dolenz says proudly.
No, the Monkees were not the Beatles. Who was? But when the last surviving Monkee sings Last Train to Clarksville at this year’s Beatles on the Beach, he will know that 56 years later, the group has earned an enviable amount of respect and, what’s more, affection.
“The Beatles got what the Monkees was,” Dolenz says. “A TV show about this group.”
The TV show won an Emmy. The band had four No. 1 albums on the charts and sold 75 million records.
In May 1967, the Monkees released Headquarters, on which they played their own instruments.
Headquarters debuted at No. 1, for a single week. Then another album knocked it from the top spot.
That album was Sgt. Pepper’s Lonely Hearts Club Band.
The Monkees stayed at No. 2, right behind the Beatles, for the next 11 weeks.

If You Go
What: International Beatles on the Beach Festival, a four-day event featuring bands from around the world playing tribute to the Beatles, artwork displays and a performance by Micky Dolenz of the Monkees
When: Dec. 15-18
Where: Old School Square Pavilion and clubs throughout Delray Beach
Information: beatlesonthebeach.com for a list of venues, events and ticket sales.