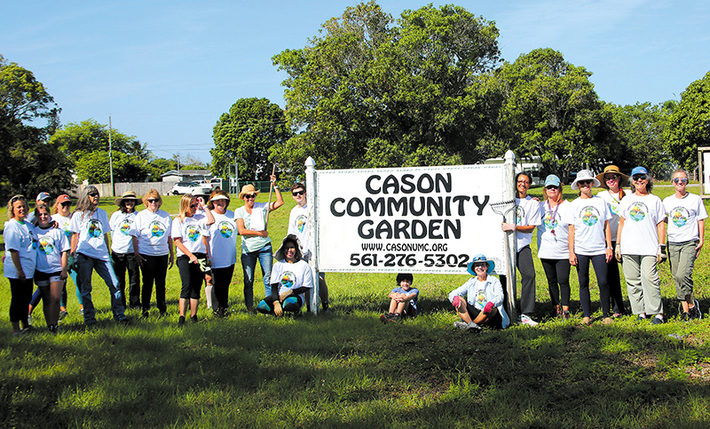 Volunteers gather one last time in April after cleaning up the garden land next to Cason United Methodist Church, which has agreed to sell the property. The fruit and vegetable garden had been there since 2008. Photos by Tim Stepien/The Coastal Star

All that remains of the once flourishing community garden near the corner of Lake Ida Road and Swinton Avenue is black weed cloth and concrete blocks. The property is being sold and the garden had to go.
Cason United Methodist Church has been entertaining offers on the valuable Delray Beach acreage for 10 years. A soccer complex almost came to fruition. Other failed proposals included a water park and a homeless services facility. The current sale of the 4-acre tract won’t be final until the end of the year, but the scuttlebutt is that ten $1 million houses will be built there.
Gary Broidis of Atlantic Commercial Group is handling the sale, but remains mum about the buyer, the sale price and any development plans.
Garden manager Candy Evans called the closing of Cason Community Garden after 14 years “bittersweet.” 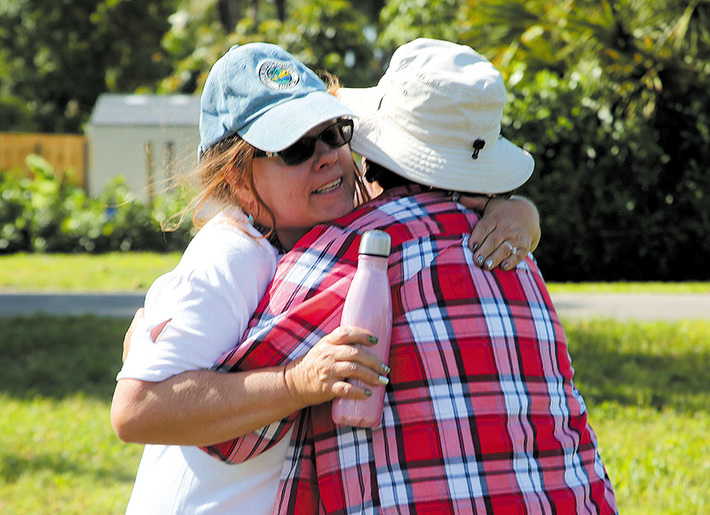 Candy Evans, Cason Community Garden founder, receives a farewell hug from a volunteer at the garden.

Evans was there with co-founder Lori Robbins when the first shovelful of dirt was turned over in 2008, and she gave the final orders as the organic garden closed April 9. A feeling of gratitude was evident as she exchanged hugs with volunteers she’s cultivated over the years.
The community garden at 342 N. Swinton Ave. began as a Hail Mary to help keep Cason United Methodist Church open. It turns 120 years old this year. But in 2008, the membership was dwindling and leaders were planning to close the church.
As members brainstormed ways to keep the church open, Evans and Robbins suggested using the vacant land just west of the church, unused for decades, as a public community garden.
“We never thought it would make any money,” Evans said. “We just wanted to do something positive for the community.”
Evans and Robbins were guided by three Christian responsibilities: feeding the needy, educating the public and being stewards of the Earth. A garden, they thought, would do all three.
There was one snag: Neither knew much about vegetable gardening.
“But we had everlasting faith,” Evans said.

One day, Michael Lorne of Lorne & Sons Funeral Home found himself carpooling to Miami with the Rev. Linda Mobley of Cason. When Mobley told Lorne, who has a degree in horticulture and is a master gardener, about the new garden, he couldn’t get involved fast enough. Through the years he offered guidance to citizens who bought plots.
The garden was started with donated compost and weed cloth, and Evans brought a hose from home that stretched from the church across the parking lot to the garden.
In telling the story to the Florida United Methodist Foundation, Evans said: “With every step in the building of the garden at Cason, doors opened, and volunteers and supplies were offered. With God’s hand, we were guided through.”
Like the church, Lorne & Sons has served the community for decades, since the 1950s. Michael Lorne hoped to take a different career path, in horticulture. But the family business needed him, and he took his place there in the 1970s. Gardening instead became an avocation, and he loved teaching Cason’s plot-owners the basics of Florida gardening without chemicals.
The first-year crops included strawberries, green beans, Swiss chard, heirloom tomatoes, melons, collard greens, beets, herbs and six kinds of peppers. Enthusiasm for the project grew each year and soon there was a waiting list for plots.
“A professor from the University of Florida came to visit and said it was one of the finest community gardens she’d ever seen,” Lorne said. “It’s a lot of work. You have to have eyes on your plants every day.”
Gardening without chemicals is especially hard because insects in Florida flourish like weeds. “It’s a real hands-on project and Candy Evans is the reason it was successful,” Lorne said. The garden had some floral touches but mostly grew organic produce. More than 25,000 pounds of its food went to Delray’s Caring Kitchen to feed people in need. Photo provided

As a result of the garden, things began to change around the church. It had more laughter, hugging and banter, people helping each other, everything members wanted the church to be. Cason UMC became known as “the church with the garden.” Sunday attendance more than doubled, from 75 in 2008 to 165 in 2012.
The garden doubled in size too, from 2,500 to 5,000 square feet, with plots in two sizes. Some were rented by families and groups, others by individuals or couples. Evans, who had found support at the church as a new mom of triplets in the early ’90s, now had three teenage helpers and an ability to delegate.
“I have no problem telling people what to do,” Evans said. With her calm manner she doesn’t sound bossy. And she’s grateful for the help from people like Keith Humphries, whose red pickup was a familiar sight, always carting something somewhere. “Many hands make light work” is one of Evans’ favorite sayings.
The garden closing coincided with a day set aside locally for the annual Great American Cleanup, a months-long event sponsored by Keep America Beautiful Inc. The April 9 event sponsors were the county’s Solid Waste Authority and Keep Palm Beach County Beautiful. Evans and her volunteers left the garden area as neat as a pin so the church wouldn’t be fined by the city as it waits for the sale of the land.
Humphries’ final job was to haul away the last few plants and the garden bench where people had so often rested weary legs and backs after work. His mornings will no longer include watering or weeding plants.
“I probably put in about 15 hours a week,” said Humphries, who lost his wife a year ago. The garden had been his respite. He’s putting his Lake Ida house on the market, and he hasn’t looked too far past that.
The community garden premise is simple: People pay a fee for a plot and grow whatever they like under the guidance of a volunteer master gardener and with the support of the garden community. Gardeners get to keep most of their organic produce, but are asked to give at least 10% to soup kitchens and other charities that feed homeless people.
And that may be the biggest tangible loss. Evans estimates the garden gave away 25,000 pounds of organic produce to the Caring Kitchen in Delray Beach over the years. Now, the kitchen will have to buy vegetables to feed the hungry. In 2012 there were more than 20 local community gardens. Today there are a handful.
“It’s harder to find volunteers,” Evans said.
There’s also less interest among younger generations to work the land.
What will happen now? No one knows. At Cason, Robin Fogel is spearheading the search for a new spot for the garden. The gardeners would like 5,000 square feet, and it has to be full sun, fairly flat and cost nothing to take over.
“It would be a shame if the garden never found a new home,” Evans said. “Gardens are special because all at once you can connect with the earth, your spirituality and your community.”
Annual events, such as the popular pumpkin patch in the fall, are still planned on the remaining acreage, but smaller in scale.