James McCray, part of the homeless task force in Delray Beach, cuts the hair of Thomas Germaine near the shower truck that is parked behind St. Matthew’s Episcopal Church. Tim Stepien/The Coastal Star

They are people many choose to look past and not see. And those who do see homeless people scattered throughout Delray Beach tend to look away.
Yet over the last four years a growing number of caring people have been looking out for others who call Delray Beach home — even if they have no permanent place to live.
Most visible among those who work closely with the city’s homeless people are members of the Delray Beach Police Department’s community outreach team. It includes two police officers and Ariana Ciancio, a licensed mental health counselor who serves as the city’s service population advocate.
Behind them — and less visible — is an informal circle of representatives from social service and other organizations who have made it possible for the city to offer service unmatched by any other community in Palm Beach County and perhaps South Florida.

“Delray Beach as a municipality is doing more and having more success than any other city in the county,” says Ezra Krieg, a longtime advocate for homeless people in Palm Beach and Broward counties and chair of the Delray Beach Homeless Initiative Task Force.
Delray Beach’s homeless community recently came into focus as the City Commission debated a revised aggressive panhandling ordinance that critics say targeted people without permanent addresses. Although some expressed differing opinions on the impact of the ordinance, which passed by a 4-1 vote, they agree generally on how well the homeless population fares in Delray Beach. 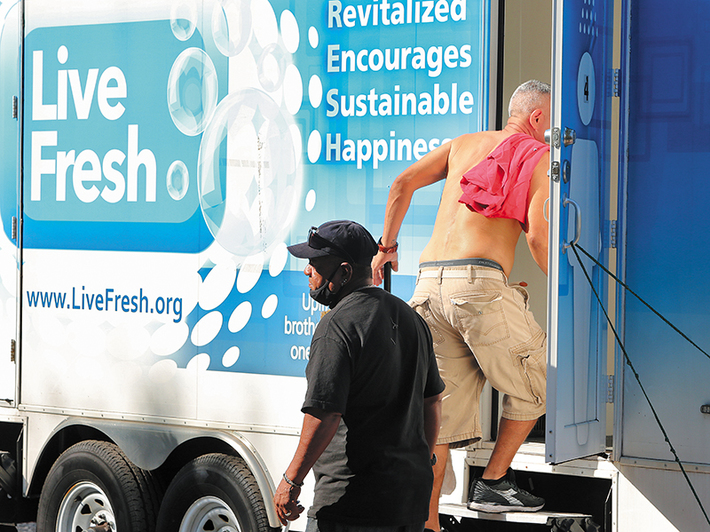 A homeless client heads inside the truck to take a shower behind St. Matthew’s. The showers are offered on Tuesdays and Fridays.

Homeless people can take advantage of a twice-a-week shower truck, get their clothes washed, their hair cut and receive medication and other medical services. Meals are available five days a week and groceries are available for people who have ways to prepare them.
“There’s an entire system that supports a homeless individual or homeless families with compassion and dignity,” says Maura Plante, the founder of Living Hungry, which provides meals to homeless students and needy families in Palm Beach County and helps provide food for people in eight other Florida counties.
That effort is led by the task force, a well-organized collaboration of agencies and individuals that meets monthly — virtually during the pandemic.
A key member of the task force and one responsible for many of the services that set Delray Beach apart is the Interfaith Committee for Social Services, which provides the shower truck as well as clean clothing. The organization also helps the task force connect homeless community members with medical and mental health resources.
Another key provider of services is the Caring Kitchen, run by CROS Ministries, which offers meals five days a week at two alternating mobile locations.
“Delray Beach is the envy of other cities,” Plante said. “There is no other city in Palm Beach County that has a set of active collaborators like this working together. It’s actually inspiring.”
Offering services is one thing. Getting people to use them is quite another. That’s where the Police Department’s community outreach team of Ciancio and Officers Damien Ferraiolo and Matt Warne come in.
Along with intern Hulda Augustin, a social work student at Florida Atlantic University, the team helps homeless people get through a system that can be filled with red tape, especially when no permanent address is available.
Getting a Florida identification card or renewing a driver’s license, for example, can be nearly impossible for someone without a permanent address or without access to a computer or phone.
“We help navigate resources and remove barriers,” Ciancio says.
The team from the Police Department also helps provide transportation to emergency housing in West Palm Beach when and if it is available.
That’s a big if, but thanks to the city’s strong relationship with Palm Beach County’s homeless outreach team, Delray Beach has had success finding emergency and permanent housing for people living on the streets.
In one week in February, the city’s team placed six people in emergency housing, a major accomplishment considering that just 220 beds are available in shelters run by the county. The 2021 total through mid-March was 25 people placed in emergency housing.

Reducing the number of people living in Delray Beach without permanent housing is a key goal, and there is hard evidence that what the team is doing is working.
Each year the city, usually along with Palm Beach County, does a Point In Time homeless count that provides information that can be used to determine service needs.
In 2018, volunteers and city staff members identified 110 homeless people in the city. In 2020 that number had dropped to 91. The 2019 number, 72 homeless people, is generally discarded by Ciancio because bad weather on the day of the count kept the number artificially low.
This year’s count, which took place in late February, showed 81 unsheltered people in Delray Beach, a vast majority of them men. Among the 81 were six veterans.

Since the Police Department hired Ciancio in 2017 to serve in a role unique in South Florida, she has interacted with about 800 homeless individuals.
Just over 130 of those people, she says, are now “off the street.”
Although some prefer to be homeless, others have reconnected with family members and have left Delray, thanks to Ciancio and the team.
She also tells about someone she knows as Frank, whose underlying substance abuse issues led to his being homeless for years.
Ciancio met with him 34 times between May 2019 and April 2020 before he agreed to undergo an assessment to see if he qualified for emergency housing.
Eventually, Frank was able to get a driver’s license, a job and an apartment — something he says would not have been possible without Ciancio’s help.
In a recent text to Ciancio, Frank let her know how much he appreciated the support he received and how much he appreciated the work she does with others.
“You have breathed life back in to many people, where there was no hope and I would like to say thank you,” he wrote. “May you continue on your quest to help others, with success by your side.”
Ciancio was grateful for the note but not surprised.
“I get a lot of those,” she said.
For Ciancio, Ferraiolo and Warne, the key to success is building trust through compassion while at the same time making sure rules are followed.
The members of the team know most of the homeless regulars in the city by name and it’s not unusual for Ferraiolo to make rounds to make sure they’re doing OK.
He also is there to help ensure Ciancio’s safety and to use his authority as a sworn police officer when needed.

‘I never give up on them’
Persistence is perhaps the long suit for the team members, a trait that makes Delray Beach an attractive spot for homeless people.
“Everyone in most of these people’s lives have given up on them,” Ciancio said. “I never give up on them.”
Like she was with Frank, Ciancio is tenacious when it comes to providing services, even with people who want to continue their lifestyles.
“I never go away,” she said. “I’m always here and I always let people know I’m here to help.”