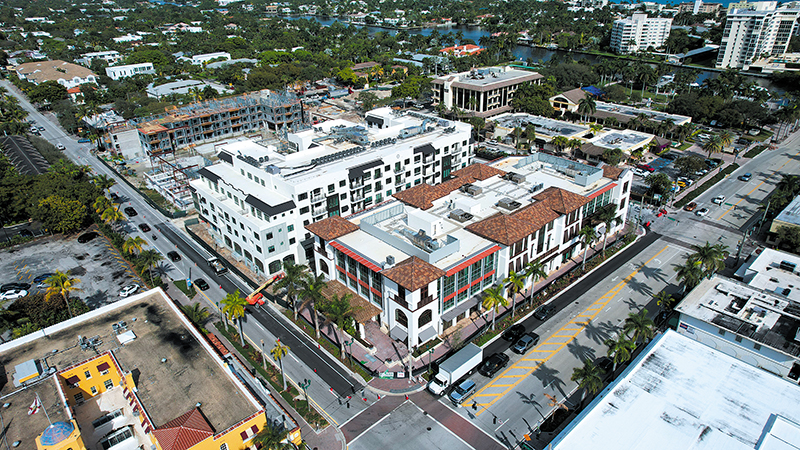 Atlantic Crossing is at Atlantic Avenue and northbound Federal Highway in Delray Beach. Photo provided by Edwards Cos.

Atlantic Crossing is ready to make a splash in downtown Delray Beach.
There could be ripple effects for decades as the 9-acre project east of Federal Highway transforms a critical section of the city’s bustling Atlantic Avenue.
The $300 million project, in the works for more than a decade, will — by April, if the developer’s latest estimate is accurate — let people shop in its first stores, eat at its first restaurants, work in its first offices, live in its first apartments and stroll through one of the tree-graced plazas that its owners hope will make it a destination within a destination downtown.
“It’s a huge project for the downtown as it fills in a transitional gap that we’ve seen for a while, from our core historic downtown to the bridge,” says Laura Simon, executive director of the city’s Downtown Development Authority.
Where to begin?

The missing link
Atlantic Avenue is booming, with a restaurant and nightlife scene that rivals other famous South Florida destination streets such as Las Olas Boulevard in Fort Lauderdale and Clematis Street in West Palm Beach. On the beachside, the avenue is a hot spot for visitors enamored with the “sea” in the city’s Village by the Sea moniker.
But the stretch of the avenue from northbound Federal Highway to the Intracoastal Waterway bridge has struggled over the years to find its identity.
The Blue Anchor restaurant and pub, with its imported façade from a 19th-century London establishment, made a home on the south side of the avenue there, along with a few other restaurants, shops and a bank. The north side was marked by a blighted vacant lot of a one-time gas station, along with an antiques mall and financial center. Atlantic Plaza, the main attraction, had a combination of restaurants, shops and offices geared more to drivers pulling in than to pedestrians strolling by.
Atlantic Crossing will take up the whole northern portion from northbound Federal to Veterans Park at the base of the bridge. It aims to attract both motorists and pedestrians — as well as have a built-in customer base of people taking up residence in its apartments and condos.
“We have always viewed Delray as a highly desirable location for residents, workers and retail/restaurant customers,” says Don DeVere, vice president of the Ohio-based Edwards Cos., which is developing the project.

Hidden parking
A key to integrating the project into the pedestrian-friendly nature of the downtown is its out-of-sight parking. While the surface layout is geared for walkers, the underground space accommodates the cars that will bring the visitors to Delray Beach.
There will be more than 1,000 parking spaces in the development when it’s completed. The single-level main garage, underneath the buildings along northbound Federal Highway, can be accessed from a street into the development from Federal Highway or by taking Northeast First Street and then entering the project.
The underground garage, with its 442 spaces, covers 3.6 acres. That’s almost the size of three football fields.

By the numbers
When built out, Atlantic Crossing will have 261 apartments, 82 condos, 83,462 square feet of Class A office space, 39,434 square feet of restaurants and 37,642 square feet of shops.
It has been opposed over the years by nearby residents who fear it will create a traffic jam at the bridge and is too big to fit Delray’s village character.
Only a portion of the space is in the first phase — and only a portion of the first phase is getting set to open: just two of the six buildings that are part of the overall project which broke ground in 2018. The two buildings have ground-level shops and restaurants, with 85 apartments on the upper floors of one and two floors of office space over the shops in the other.
“For us, that corner has been dormant for a very long time,” Simon says. “To have those opening up for business and the additional parking that’s there, it’ll just continue to bring more pedestrians and spread the downtown out and really bring back life to that area.”

A different downtown vibe
While Atlantic Crossing doesn’t have the ambiance of the restaurant-lined, two-lane portion of the avenue between Swinton Avenue and Federal Highway, it’s ready to set a different mood. The narrower, oak-tree-canopied historic section of the avenue will now give way to a more open, palm-tree-lined gateway to the beach.
“Landscaping on both sides of Atlantic has been installed and the patio at the corner of Atlantic and Federal has been carefully detailed to entice customers,” DeVere says. “But most important are the buildings themselves, which have been carefully designed to contribute to the Atlantic Avenue streetscape.”
Walkways within the development will have plenty of trees, art and seating, and will connect to Veterans Park along the Intracoastal Waterway.
Instead of a monolithic project design, the buildings each have their own theme, to give the impression they developed organically over time. The styles range from Mediterranean architecture to the sleek look of Florida stone sidings, some buildings classic and others modern.
Simon appreciates the open space in Atlantic Crossing, but wishes it had more.
“Open space is very important in urban centers,” Simon says. “Our hope is we can really enhance the Veterans Park area to become an accessible area for people to be outside and take advantage of that open space in a denser area, because it’s going to be dense.”

Economic impact
Data going back to 2014 estimates the construction itself will create more than 1,000 jobs exceeding $60 million in annual salaries, while there’ll be 600 permanent jobs once the project is finished, accounting for about $30 million a year in wages.
Atlantic Crossing is expected to produce $2.6 million in new annual tax revenues for the city and $2 million in building permit fees.
As for the people who will be living at Atlantic Crossing, it’s estimated they will be spending about $6.1 million a year in the city. 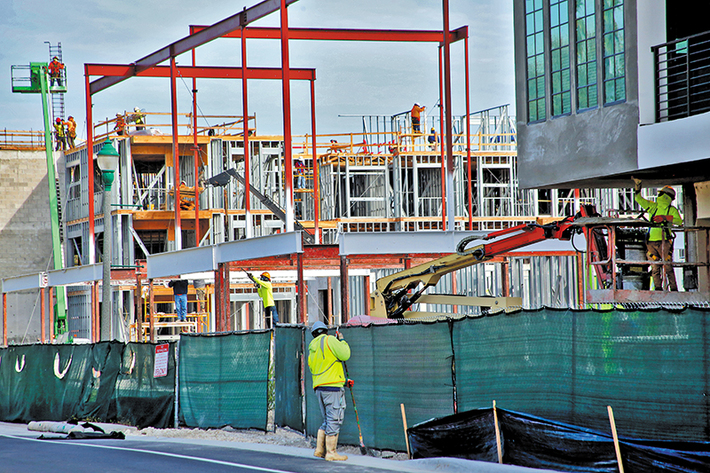 Construction crews work on Atlantic Crossing, a $300 million project that will span two blocks from northbound Federal Highway to Veterans Park. Two of the six buildings that are part of the first phase are expected to open by April and include apartments and a few restaurants and other businesses. Tim Stepien/ The Coastal Star

Long-awaited opening
Projected completion dates for the first phase have come and gone, and now the developer is saying the initial openings are just around the corner, by April. “We expect at least one retail store, offices and the first set of apartments to be open the first quarter of this year,” DeVere says.
His company initially thought 2020 would see some openings, but that time line got pushed back to mid-2021, then late 2021. The more recent delays, the developer says, are directly attributable to labor, material and supply chain problems brought on by the pandemic.
“It’s hard to predict with so many variables,” DeVere says. In addition, even if construction is completed, it may take businesses or offices extra time to build out and occupy their interior spaces.

Signed and on board
A number of the businesses moving into Atlantic Crossing are coming from their previous digs at Atlantic Plaza, including Merrill Lynch financial services and Chico’s, a women’s clothing store that will now have full frontal exposure on the avenue.
“We have seen very strong demand for office [space] at this location and hope to have the remaining space leased within 60 days,” DeVere said on Jan. 25. “We already have significant interest in the phase two office space.”
Le Colonial, a Vietnamese restaurant with a French flair, has the prime spot at the corner of Atlantic and Federal, in the same building as Chico’s and Bounce Sporting Club, a high-end bar that combines sports and nightlife and plans to open in the summer.
In the building to the north are two other restaurants, The Hampton Social — a nautical-themed restaurant out of Chicago, with a coastal menu that aims to replicate the feel of the Hamptons in New York — and Ó·Ra Cucina and Bar. As many as eight first-floor suites are available in the two buildings for other businesses wanting in.
As for the new apartments, Atlantic Crossing plans to begin leasing in February.

Wide, but not so tall
Atlantic Crossing, when completed, will be the biggest project ever downtown.
It has a large footprint of two full city blocks, but it’s not reaching for the sky. Developers say the size of the buildings is more in keeping with the small-town vibe the city tries to exude, with two at three stories, two at four stories and two at five stories.
“The sun always shines here in Delray Beach. We’re not shaded by tall skyscrapers,” Simon says. “You’ll hear that from some of our long-standing retailers, that they enjoy being on the sunny side of the street. It makes a difference. People feel different, happy.
“Atlantic Crossing is on the sunny side of the street,” she says. “The good news is it’s not a 40-story building.”

Farewell, Atlantic Plaza
Members of Delray’s Simon family designed and built Atlantic Plaza, with its easily remembered 777 E. Atlantic Ave. address next to Veterans Park and the Intracoastal, drawing customers from the beach to the east and the city to the west.
The plaza was a shot in the arm for Atlantic Avenue when it was built in 1985, the year before the city’s Community Redevelopment Agency was created and the renewal of Atlantic Avenue began in earnest.
“It was meant to be that catalyst for change, to also enhance that part of the district, to expand that district to the bridge,” the DDA’s Simon says.
Her father, Roy Simon, designed Atlantic Plaza, and her uncle, Sandy Simon, was its lead developer. The family is sad to see it go, but knows Atlantic Avenue is ready for a new catalyst, which the city hopes Atlantic Crossing will be.
“My father has lived here for 91 years in Delray Beach,” she says. “Our family has been here since 1912. So, there’s change. That happens. It’s part of life.”