Mykal Banta, library assistant director, helps Audrey Vassallo at the monthly Wash & Read at the Laundry Stop. The library gives away cards for the machines and paperbacks. Photos by Bruce Bennett / The Coastal Star

You’ve probably noticed that libraries aren’t what they used to be.
You might even wonder if they need a new name.
The word derives from the Latin librarius, meaning “of books.”
The Delray Beach Public Library still has plenty of books — 124,067 in print and another 8,574 available for download.
But you can also borrow DVDs, use the free computers, attend a virtual yoga class, or find help preparing a résumé.
You can request a series of “memory kits” with DVDs, flash cards and booklets to help people struggling with memory loss.
And then there’s “Wash & Read,” a library laundry service for homeless people. On the third Wednesday of every month, Mykal Banta, the library’s assistant director, arrives at the Laundry Stop on George Bush Boulevard bearing backpacks and satchels, blankets, laundry detergent, laundromat debit cards and, of course, books.
“We began in November 2019, and we haven’t missed a Wednesday,” he says. “We talked about stopping the program for COVID, but I didn’t want to do that. There’s nothing like putting on clean clothes, especially when you’re homeless and don’t have the opportunity very often.”
On an average Wash & Read Wednesday, five or six men and women arrive. Once or twice a dozen have shown, sometimes only two.
“I’ve never had nobody come,” Banta says.
On this third Wednesday in July three men and a woman appear, carrying their dirty clothes in backpacks or travel bags. 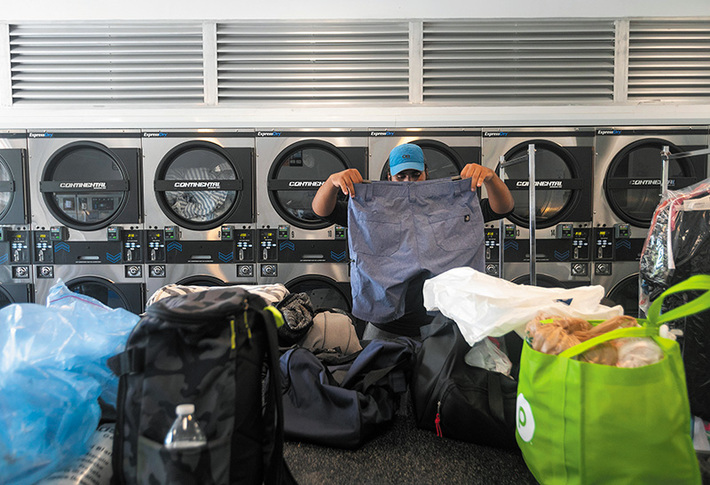 Jonathan Neves says the program shows that ‘the library really cares about us.’

Jonathan Neves, 26, grew up in Coral Springs.
“I’m sleeping out,” he says. “I have a tent hidden away in a little forested area. For some it’s tough, but I have a tent and a mat, so it’s not too bad. I wouldn’t say I’m lucky, but it’s peaceful.”
Neves has been living like this, off and on, for four years.
“I struggle with some mental issues,” he says. “I’m bipolar with some social psychosis, animosities. Sometimes I completely freak out.”
Has he no family to help him out?
“Blood family? Not so much. They’re very judgmental and unaccepting. I do have someone who cares for me, but she’s in Costa Rica. We talk on the internet.”
Along with the laundry soap and debit cards, Banta fulfills his librarian job by offering each customer a brand-new paperback novel. The authors are familiar names. Agatha Christie. Lee Child. James Lee Burke. Neves accepts a backpack and satchel, but won’t take a free book.
“I read,” he explains, “but strictly only the Bible. I wouldn’t touch a book except the Bible.”

Wash & Read began as a suggestion from Isabella Rowan, the library’s director of programming and volunteers. The idea was to engage a different area laundromat each month, but they couldn’t reach the owners. And then they called Stacey Runfola, who had bought the Laundry Stop at 718 George Bush Blvd. in January 2019.
“Of course,” Runfola said, “I’d be happy to host it every month.”
And she offered to match the library’s contributions.
“Most people who are homeless are not there by choice, but by circumstance,” she says, “whether it’s mental illness or a million other circumstances, so this was an ideal opportunity to help.”
Now the program is funded by a $12,000 grant from the Virginia & Harvey Kimmel Family Foundation. It’s money the library also uses to support the Caring Kitchen food truck in the library parking lot every Monday, Wednesday and Thursday, and the funds support the shower truck that visits St. Matthew’s Episcopal Church on Wednesdays and Fridays. The shower truck is operated by the Interfaith Committee of Social Services, where Banta serves on the board.

Audrey Vassallo, 64, is from Bergen County, New Jersey. Most of the people who have come to the Wash & Read this week are friendly, polite and happy to talk. Vassallo can’t seem to stop talking. She chatters on and on, her brain leaping from one passing thought to the next in an almost acrobatic display of free association.
“I just found out about this. Nutrition is my hobby. I’ve been in Delray two months and three weeks. I sleep anywhere. On the beach. I’m signing up for rental assistance. I was on the rental assistance on the Jersey Shore. I had a lot of falls and injuries when I was 16 and my mother smoked a pack a day and had a slight drinking problem. She’d hit and slap and all that.”
And on and on.
Mykal Banta has been a librarian for 27 years, all of them in Delray Beach. His mother was a librarian before him. Librarians are legendary for shushing those who talk too loudly in the library, but Banta indulges Vassallo’s monologue with admirable patience.
“It’s in a librarian’s nature to help,” he says. “Librarians want to make lives better, to help people enjoy their full potential, and the greater the need, the greater is our need to help.”

John Koenig, 40, grew up in Monmouth County, New Jersey. He has been in Delray Beach 10 years and homeless for three because his great need is heroin.
“I’m a heroin addict,” he says. “I’ve been shooting up for 22 years. That’s why I’m homeless. I’ve been in rehab numerous times, inpatient and outpatient, AA, the whole nine yards. And I failed.”
This is his first visit to Wash & Read, which he heard about at the Caring Kitchen’s library visit this morning. 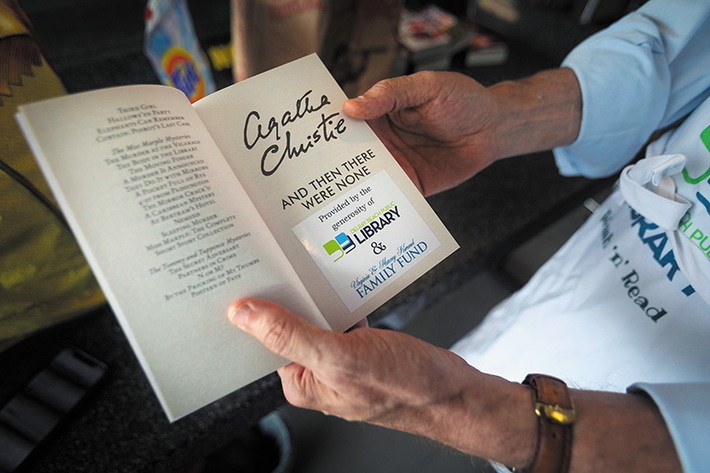 An Agatha Christie novel was among the offerings in July.

“I used to come here and pay and it cost about $10,” he says, waiting to move two loads from the washers across to the dryers.
“I’ve had hep-C and I still drink a half gallon a day of the cheapest, crappiest vodka I can buy.”
Koenig’s eyes are clear and his speech is alert and notably articulate. It’s easy to believe he was in his junior year at Rutgers University when he got arrested for a crime he doesn’t want published and started downhill to homelessness.
“I pretty much sleep wherever I can,” he says. “Anywhere the cops won’t hassle you.”
Sometimes his family in New Jersey sends money.
“And I can make $100 a day on the Atlantic Avenue on-ramp,” he says.
He has been arrested 20 or 25 times — for panhandling, open container violations, narcotics.
“I’ve been married twice,” he says. “I’ve had plenty of good jobs. Houses.”
This week he chooses a free blanket and The Guardian, a John Grisham legal thriller.
“Maybe one day I’ll get it together,” he says.”Who knows?”

Brian Williams, 52, is a former roofer who has been living in South County for 36 years and homeless for six.
“I’m an alcoholic, and that keeps me from finding regular employment,” he says. “I’ve had a broken hip and lung cancer. And I’m still smoking cigarettes. It’s a hard addiction to quit.”
Williams has been doing his laundry at Wash & Read since the library started the service.
“I love the library,” he says. “I go there every day to use the computer system to look for work, and I borrow books all the time.”
This week he accepts a free copy of Immortal Angel, by Lynsay Sands.
“I’m a sci-fi geek,” he explains.
Unlike Koenig, Williams insists that he does not panhandle, ever. But he does have a clever technique to help him get money.
“Panhandling is illegal, so I don’t do it,” he begins. “Have you ever heard of The Mandalorian? It’s a Star Wars show, and Baby Yoda is the main character.”
Six months ago, Williams explains, he bought a stuffed little Baby Yoda at Walmart.
“He rides in my backpack.”
Williams parks himself on a bench by the beach with Baby Yoda peeking adorably out of the pocket on his backpack, and when diners leaving Boston’s or Caffe Luna Rosa pass, he humbly asks, “Are you going to eat those leftovers?”
“I don’t ask for any money, but sometimes when they see Yoda they’ll give me a couple bucks,” he says. “Everybody loves Baby Yoda.”
At the moment, Baby Yoda is in the dryer.

On the very first Wash & Read in 2019, Stacey Runfola remembers, a homeless man was pulling his clothes out of a dryer when she heard him murmur, “That smells like self-respect.”
No, that simple word “library” doesn’t begin to describe what the Delray Beach Public Library is doing.
Maybe it needs a new name. But what?
“You can tell the library really cares about us by the way they carry themselves,” Jonathan Neves says as he pulls his own clean clothes from the dryer, heading back to his tent in the woods. “The library is a cornerstone of the community.”
The Delray Beach Public Cornerstone?
That would work.