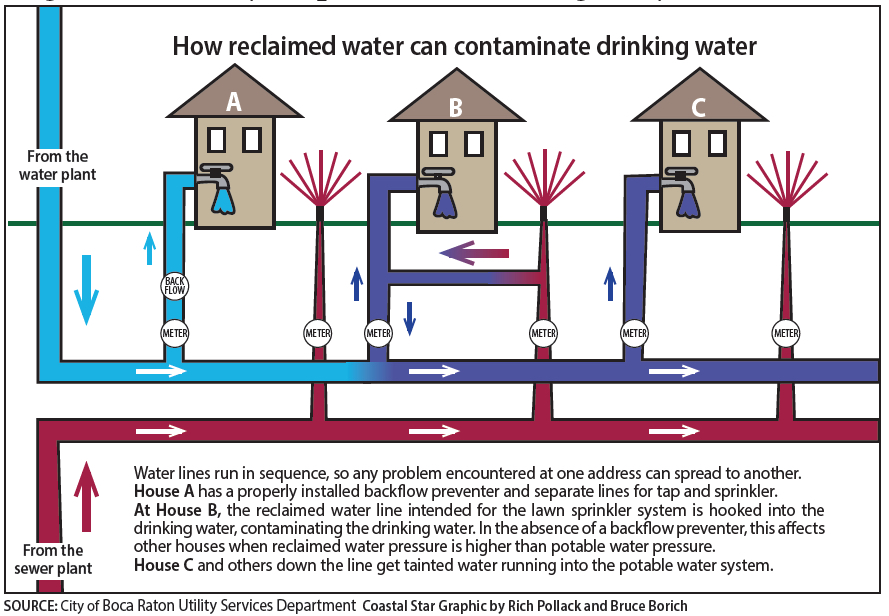 Using reclaimed water for irrigation, especially in coastal communities, is generally a safe and economical way to keep lawns green and shrubs and flowers healthy.

As what happened with a few homes in Delray Beach shows, however, mishaps can occur, and they have the potential to create health issues.

Generally there are several steps that utilities take to prevent drinking water and reclaimed water from mixing together, according to Chris Helfrich, Boca Raton’s utility services director.

In Delray Beach and Boynton Beach, reclaimed water from the South Central Regional Wastewater Treatment Plant is pumped to communities though main lines generally colored purple. It then reaches a home irrigation system through a metered line, which is inspected at the time of installation.

Drinking water arrives through separate force mains, usually colored blue, and is metered as it flows into the home through connections to the main line.

Water utilities have several methods of preventing drinking water and reclaimed water from mixing. First they make sure — through on-site inspections — that the two pipes coming into the home are separated.

In cases similar to what is suspected of happening in Delray Beach, a homeowner concerned about irrigation water pressure being too low connects the drinking water line to the reclaimed water line.

State regulations are in place to minimize health problems from reclaimed water. Locally reclaimed water from the regional plant is treated to what is called advanced secondary treatment standards and is passed through a sand filter and highly chlorinated before it is distributed.

It is tested at least daily to ensure that all fecal bacteria and parasites are removed, with reports sent to state agencies on a regular basis.

Still, the reclaimed water coming to Delray Beach from the regional treatment plant is not considered suitable for drinking by state standards.

“Reuse water does contain higher nitrogen levels than most potable water, which is good for irrigation,” said Colin Groff, Boynton Beach’s assistant city manager for public services. “It could also contain small traces of heavy metals that are not harmful to the environment but could be to humans, which is why it is not used for potable water without a higher level of treatment.”

Groff, whose city along with Delray Beach oversees the operation of the South Central Regional plant on Congress Avenue, says some communities elsewhere in the country do have drinkable reclaimed water.

Could reclaimed water make people sick if they drink it?

The answer is yes — and no.

“It could,” says Helfrich. “It depends on a lot of variables.”

One of those variables is the health of the person drinking the water. Another is how individuals react to the nutrients in the water to which they might not be acclimated.