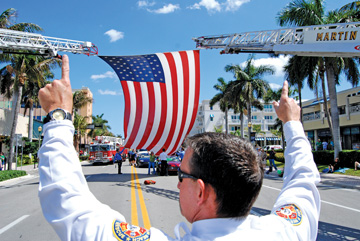 When in doubt, walk right up to the guy in the kilt. It makes life more interesting. And in this case,

it’s the best way to find the guy running things.

Capt. John Ficsher of the Palm Beach County Fire Rescue Pipe and Drum Band, has spent the better part of a year

collaborating with Delray Beach, bringing hundreds of firefighters from around
the world here to march on Atlantic Avenue during city’s the 42nd Annual St.
Patrick’s Day Parade.

“It gives people a sense of stability in unstable times,” Fischer said, as dozens of his colleagues shined red fire engines and handed out green beads nearby.

“It’s important to show unity. We’re all here on one street, on one day.”


“Absolutely,” Fischer said, when asked if he’ll be back next year. 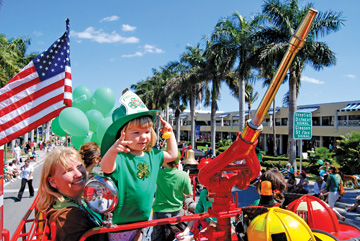 More than an hour before the official parade kickoff, Atlantic Avenue was a festive sea of green — wigs, dresses, socks, beads, flip-flops, boas. People strode along the avenue with

John and Barbara Connolly live in the Bronx, but they’ve been coming to the Delray Beach St. Patrick’s Day Parade for eight years. day circling the airport in West Palm Beach, the day before. But now that he’s
standing in the sunshine, he’s not disappointed.


He said he’s enjoying the hospitality, and has made a lot of friends. But he isn’t quite sure he’ll remember them once he gets back to Dublin. 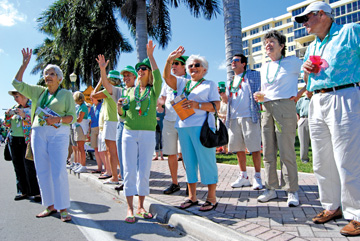 Gary Sands, a paramedic on Palm Beach County’s Trauma Hawk air ambulance, had a more altruistic take on the day.


“To me, it’s giving back,” said Sands. “It’s showing the community we’re there for them.”

Joe Rodgers, an antique dealer from Wellington, brought a 1950 fire engine to ride in the parade.


He likes to take the truck around the state, riding in parades and showing it off.

“It’s not like the new ones,” he said, opening the door and giving a guest a gander inside.


“The kids get on it, women get behind the wheel,” he said. “Everybody loves a firetruck.” 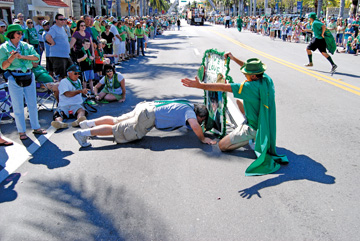