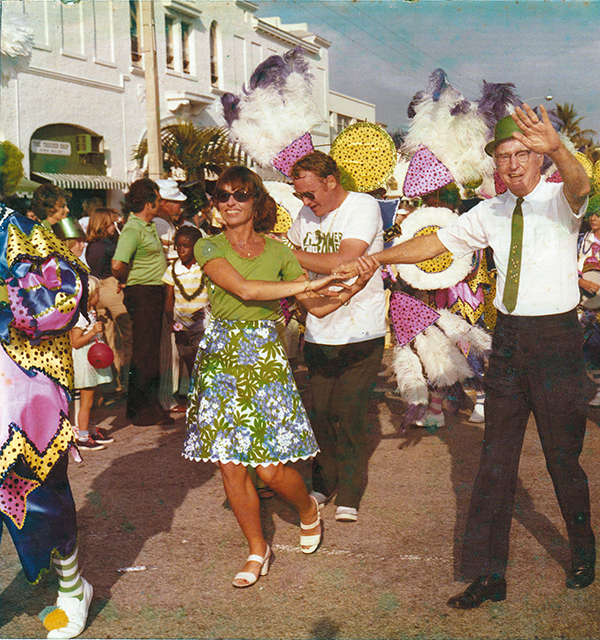 ABOVE: Parade founder Maury Power and Dennis Gallagher with Porkchop the piglet, 1988

BELOW: Kevin and Mary McCarty ride in the parade, also in 1988. Photo provided This is the time of year when fans of the Delray Beach St. Patrick’s Day Parade give a tip of the derby to Maury Power, the Irish saloonkeeper who founded the legendary procession in 1968.
A Chicago transplant, Power donned a tailcoat and top hat and carried a shillelagh to make an impromptu march down Atlantic Avenue in honor of the patron saint of Ireland.
“I’m Maury Power,” he would say to onlookers. “Come down to my bar and have a drink.”
The farther he walked, the more people would join him.
Since he died in 1996, people often bow down in front of large photographs of Power that are carried in the parade, said Pat Robinson, a friend and business owner who has been in 33 parades.
Local lore claims Power, who owned Power’s Lounge, carried a pig on his historic first march. Truth is the tinted green porker became part of the tradition a few years later. No one is sure exactly why.
“I think it was just something that, at the time, made perfect sense,” said Power’s nephew Terry.
The first piglet, Porkchop, instantly became a crowd pleaser. Porkchop has had many successors, many of them predictably hefty — including 200-pound Patrick, a star in the 2011 parade, and his predecessor Petunia, the potbellied pig famous for her fancy ruffles and sparkly tiara.
Occasionally, some of the pigs strayed from the parade path.
“Sometimes they would run free and into a store,” said David Cook, owner of Hand’s Office and Art Supply. “Some of them got so fat that they had to ride in the back of an SUV.” Animal activists protested the pigs’ involvement.
Two celebrity pigs are being driven down from Jacksonville for this year’s parade, and, while they won’t be painted green, parade manager John Fischer of Code 3 Events Inc. expects they’ll be costumed appropriately. “One of them is quite portly and won’t be able to walk the whole route, but he can ride in a stroller,” he said.
This year’s parade, which begins at 2 p.m. March 17, is the 50th and may be the last one, according to Fischer, a retired captain with Palm Beach County Fire Rescue.
“It’s been a rollercoaster ride with the [city’s] special events policies — the fee structure, pricing, what have you,” said Fischer, who has managed the parade for five years. “We’re a nonprofit, not a business. Maybe a large, corporate-level entity can afford these prices. But I don’t see a nonprofit coming in and being able to afford the fee structure. That’s why we have to respectfully bow out.”
The estimate for this year’s parade is $65,000.
“We’ve been given a $50,000 sponsorship by the city, which means we’re responsible for $15,000,” Fischer said. “That is a far cry from what we got hit with last year when we were given an estimate of $56,000. But on top of that there were hidden costs that were mandated on us like $14,000 for barricades. That wasn’t in the contract. That was a side mandate that we had to have.”
On top of that, Code 3 had to pay about $1,500 for insurance and a few other costs.
New Delray Beach City Manager Mark Lauzier said comparing costs from last year to this year is complicated and the side-by-side comparisons are not apples to apples.
“For example, barricade costs were paid separately by the promoter last year and we had to add those costs to create the comparison,” he said. “That said, the cost increase is 9 percent and approximately $6,200. Of that amount, service fluctuations are the main reason for the change. Assuming personnel costs increased at plus 5 percent, to obtain that portion of the cost increase yields a rough guess of $2,500, but that’s really hard to determine.”
Lauzier said the decision on continuing the parades is a matter for further discussion.
“After this year’s event where I will get to experience the parade firsthand, I will be talking to the fire chief, because it is a great promotional and community-building event opportunity that I believe he would be interested in continuing. No decision on that yet, but we will be talking soon after this one ends.” Despite financing concerns, Fischer says this year’s parade will be special. Three members (maybe more) of Maury Power’s family have agreed to be grand marshals. Maury’s cousin James Power is flying in from Ireland. Terry Power, a nephew from Safety Harbor, will be there, as will Katie Power, Maury’s granddaughter from Delray Beach.
As they have for the past three years, organizers have injected the nonprofit organization Honor Flight into the front wall of the parade. Sixty or more World War II veterans in their Honor Flight wheelchairs will be pushed by police officers and firefighters.
“There hasn’t been a dry eye on the street when the veterans go by,” Fischer said. “People are crying their eyes out, in a good way, just looking at that visual of veterans being treated with such honor and respect.”
When the veterans reach the parade review stand, on the second story of 32 East restaurant across from Old School Square, former interim City Manager Terry Stewart (now city manager in Arcadia) will sing the national anthem.
Also at that location at Swinton and Atlantic will be two fire department ladder trucks hanging a 20-by-30-foot U.S. flag. Those two will be part of a 12 ladder-truck team from fire departments from Miami up to Martin County.
Several large fire and police bagpipe bands are coming in from places like Long Island and Washington, D.C.
“I tell people it’s not all about the firefighters, it’s not all about the police, you’re going to see the rest of society behind them — your schools, your civic groups, organizations, businesses, nonprofits, arts and entertainment, everything from A to Z,” said Fischer, a bagpiper himself.
In conjunction with the parade, a St. Patrick’s Day Festival will be March 16-17 at Old School Square. “The festival is a major fundraiser for the parade,” said Fischer, who has rallied firefighters, police and drum and bagpipe bands to participate since 2009.
The crowds have grown beyond expectations since then. The all-time high came in 2012, when an estimated 100,000 people watched and celebrated.

2012 crowd out of hand
“It was scary how many people came,” Fischer recalled. “It was like Times Square on New Year’s Eve.”
The liquor consumption was out of control and there was a shortage of portable toilets. Downtown business owners were not happy.
“With all the drinking and the 85-degree heat, people were falling over like Weebles,” said Cook, a former member of the city’s Downtown Development Authority. “As a merchant, you can only take so much public urination. It just got out of hand.”
To remedy the predicament, parade organizers didn’t ask for an open container waiver after 2012.
“It caused a little bit of an uproar in town,” Fischer said. Red Solo cup protesters showed up at City Hall. But the brouhaha subsided after a while.
The liquor ban irked Robinson, owner of The Man of Steam carpet cleaning business. “We used to be able to drink in front of stores and they put the kibosh on that. It used to be fun.” 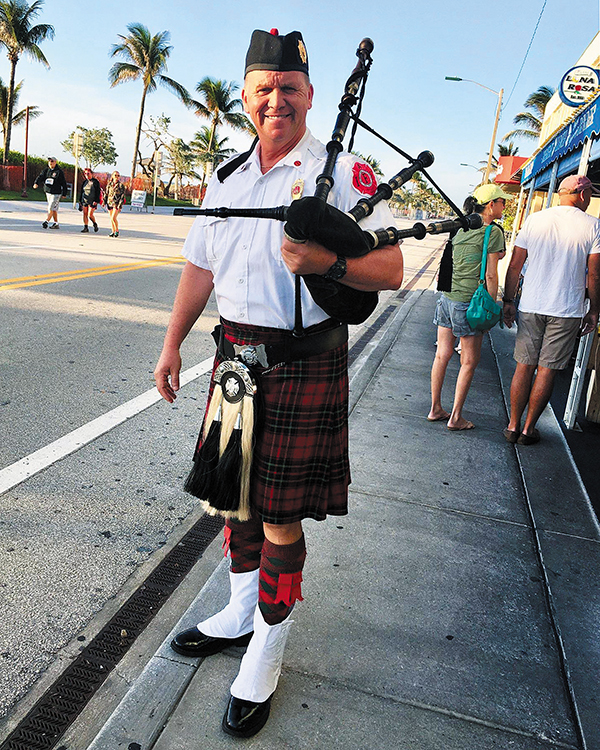 After 2012, crowd size decreased — between 40,000 and 50,000 attended last year’s parade. “But the quality increased,” Fischer said. “Businesses were saying ‘now I’ll sponsor, contribute.’ So that’s what it did in a good way. It attracted more families. It improved the cultural value, with firefighters and cops coming in from five different countries.”
Bringing in first responders from different states and countries has boosted tourism revenue, Fischer said.
“These people are coming here and getting hotel rooms,” he said. “That speaks to economic impact. If you talk to the tourism council, they’ll tell you what heads on beds means. Once you start killing tourism in your town, for whatever reason, whether it be a handful of merchants on the avenue that are complaining bitterly against shutting that street down, they’re not looking at the big picture.”
While everyone agrees the parade has been the source of merrymaking, not everyone thinks the current incarnation is better.
“It has turned into a firefighters’ convention,” said Mary McCarty, a former city (and county) commissioner who appeared in several parades on behalf of the Village Pub, where she was a bartender in the 1980s. When the parade ended, she said, people would pile into Power’s Lounge for corned beef and cabbage, and drinks of course.

Less local ambience
“It used to be a small-town, community thing,” McCarty said. “It was good fun and something everybody looked forward to. But it got so big and a lot of locals don’t go anymore.”
Robinson said the parade at which he carried his two small sons years ago has lost its luster. He remembers when the parade entry fee was a $50 donation. “Now they want your first born and a bunch of legal stuff,” he said.
The business-class entry for a float currently starts at $425 depending on size (nonprofit donations begin at $100).
“This is the price charged by the organization before us,” Fischer said. “And when we took the parade over, the parade costs were around $35,000 — now it’s $65,000.”
After Maury Power died, Ed Gallagher, owner of a former downtown nightclub called City Limits, took charge until 2007, when Nancy Stewart’s company, Festival Management Team, took the reins. Fischer’s Code 3 Events took over after the 2013 parade.
Since Code 3 officially took over, more than $12,000 has been given to first responder nonprofits, Fischer said. “And we have devoted over $1.2 million worth of personal volunteer time, and cash out of pocket, putting together the parade and running it. This has afforded the platform for many other local, national and international nonprofits to showcase themselves and get their word out.”
Robinson didn’t go to last year’s parade, although he may attend this year’s. He has many fond memories.
“For years, our float was the entertainment,” he said. “We had a deejay and at the end of the parade we would put the flatbed in the parking lot behind Power’s and people danced. A good time was had by all.”
For several years, he hired the Florida Brass drum and bugle corps to come down from Lakeland. They played iconic Irish tunes like Danny Boy.
Before Maury Power died, Robinson was charged with cleaning up Power’s Lounge, at the railway tracks (now the site of Buddha Sky Bar), the day after the parade. “I wore my boots because there was 2 inches of slop covering the brown and white plaid carpet in the back room.”
The raspy-voiced Maury Power, a cigarette hanging out of his mouth, would be in the pub with Robinson as early as 6 a.m. And Power always offered his assessment.
“Jesus, kid, we had a hell of time,” Power said to Robinson.
And they had a hell of a lot of company.

If You Go
The Delray Beach
St. Patrick’s Day Parade and Festival
When: Festival is in Old School Square 5-10 p.m. March 16 and 11 a.m.-7 p.m. March 17. Parade starts at 2 p.m. March 17
Route: Runs on East Atlantic Avenue from the Intracoastal Waterway bridge to Northwest Fifth Avenue.
Cost: Free to attend the festival or watch parade.
Information or to donate: www.stpatrickmarch.com