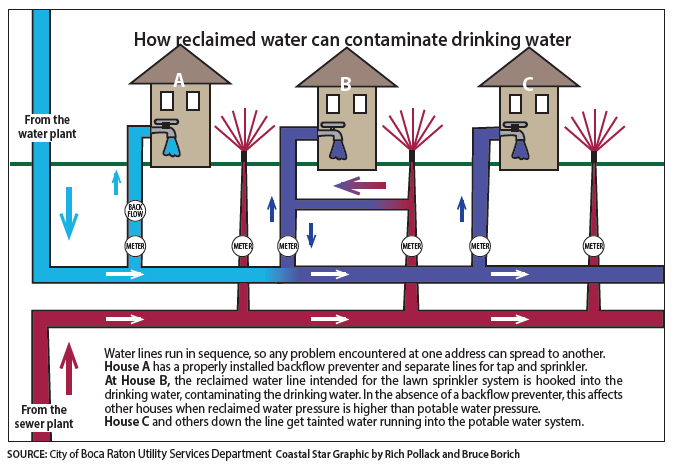 As Delray Beach awaits a possible multimillion-dollar fine over its mismanaged reclaimed water program, at least 10% of its barrier island residents have switched back to using drinking water for landscape irrigation, snubbing the highly treated wastewater.
About 20 of the residences converted back to potable water for irrigation and never notified Delray Beach, leaving their reclaimed water meters still installed, city records show.
In the summer months of July through September, the city paid Line Tec Inc. of Delray Beach to remove reclaimed water meters from four locations, according to city invoices.
A 2007 city ordinance makes it mandatory for properties to connect to the reclaimed water lines if the service is available to them, but the rule has gone largely unenforced by the city.
Problems with the city’s reclaimed water system surfaced in January 2020, leading to a state-ordered shutdown of the system for months last year while inspectors checked all the system’s connections.
Barrier island residents told the city inspectors that they converted to potable water for irrigation for a variety of reasons.
The residents said the reclaimed water was unreliable and had unforeseen shutoffs or no was longer needed because they switched to a landscape style that requires little or no watering. Some signed forms, not approved by city leaders, allowing them to opt out when reclaimed water was offered.
City leaders say they are working to bring these residents back to using reclaimed water for irrigation, but they have not said exactly how that will happen.
“It’s a criminal act if you disconnect from the reclaimed water system. Federal law protects the health, safety and welfare of drinking water,” said Fred Bloetscher, whose firm did the 2020 review of the Delray Beach reclaimed water system. “In residential areas, it’s all homes or nothing.”
One of the four locations where a reclaimed water meter was removed by Line Tec has since been reconnected. That one, at 120 S. Ocean Blvd., converted back to reclaimed water on Jan. 21, 2021, according to the utilities inspector’s notes. City inspectors had found a cross connection there in April and a boil-water order was issued for the Ocean Place condominium residents.
The other residences sit farther south on Ocean Boulevard, including one where the family and its dog were sickened in the fall of 2018, possibly from the cross connection discovered at 801 S. Ocean in December 2018. That discovery led to a boil-water order for a southern section of the barrier island.

Unenforced ordinance
What the city allows is at the crux of the reclaimed water debacle in Delray Beach.
In 2007, Delray Beach passed an ordinance making it mandatory to connect to reclaimed water within 90 days of when its pipes are laid in the neighborhood. The city pays for the reclaimed meter, the backflow preventer and gives utilities customers a lower price when they use reclaimed water for irrigation.
But the city does not enforce the ordinance, according to Bloetscher, who was hired last spring to review the reclaimed water system. The situation blew up after a phone call to the Florida Department of Health in Palm Beach County in early January 2020.
A South Ocean Boulevard resident called the Health Department to say she was not adequately informed about a cross connection discovered there in December 2018. Her complaint led to the shutdown of the entire Delray Beach reclaimed water system on Feb. 4, 2020.
The department insisted the city inspect all reclaimed water locations to make sure each had a backflow preventer installed. More than 190 of the 581 barrier island sites did not have one. The devices prevent the reclaimed water from flowing back into the drinking water supply.
The department allowed Delray Beach to turn on its reclaimed water system in phases. Most barrier island locations had the service restored by late June.
In a Jan. 7, 2021, draft letter, called a Civil Penalty Authorization Memo, the department proposed fining Delray Beach for 11 violations, amounting to nearly $3 million.
The worst violation was for failing to provide adequate backflow prevention at 581 locations. The department proposes to fine Delray Beach $5,000 for each site, or a total of $2.9 million.
“The City adopted the ‘City of Delray Beach Cross Connection/Backflow Prevention Program’ on July 2, 2008,” the state Health Department director in Palm Beach County, Dr. Alina Alonso, explained in the letter. “The City then failed to follow its plan.”
The letter also noted Delray Beach benefited financially by not implementing its plan, to the detriment of its “residents’ health and welfare.”
The letter and a proposed consent order are under review by the county branch of the Florida Department of Environmental Protection, which is the regulating agency over the state’s clean water rules.
From there, the consent order and letter travel to Tallahassee to be reviewed by the secretary of the Florida DEP. Then, the consent order, an agreement between the Health Department and Delray Beach, will be given to Delray Beach. The city can appeal the ruling to an administrative law judge.
“The time frames for the review are not known,” Alexander Shaw, the department spokesman in West Palm Beach, said in Feb. 28 email to The Coastal Star.
In a Feb. 16 email, Shaw wrote that the city’s annual cross connection report is due by March 31.