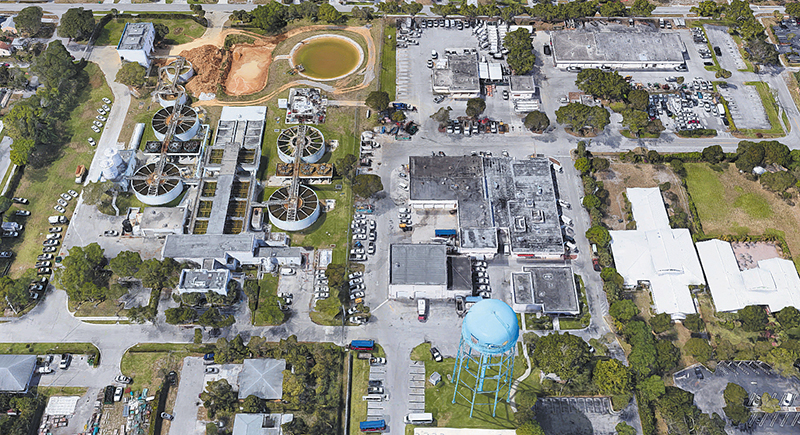 The Delray Beach water treatment plant, a few blocks south of downtown, has not received a major upgrade since the early 1990s. The city says it plans to improve cleaning and other maintenance at the aging plant, watching for trouble more closely than ever before. Google map image

One morning in late March residents throughout a large portion of Delray Beach woke up to find water coming out of their taps that just wasn’t right.
Some complained of a yellowish or reddish tint to the water while others complained of a strong odor.
Residents Reeve and Anne Bright noticed that even the ice coming out of their ice maker looked strange.
“There was black and brown stuff, like little pieces of dirt, that came out with it,” Reeve Bright said.
Concerned, the Brights threw away the ice. They now suspect the discoloration may have been the result of a series of system failures at Delray Beach’s water treatment facilities that resulted in what the industry refers to as a “slug” getting into the city water lines.
A “slug” is sediment that gathers at the bottom of storage tanks and is unintentionally released. It does not generally pose a health threat to those using the water, according to people in the water treatment industry.
“It’s not unhealthy, it’s just visually unacceptable,” says Chris Helfrich, Boca Raton’s director of utilities. “It’s not common, but it’s something that happens more than it’s advertised.”
Still, the slug that made it into Delray Beach’s drinking water on March 27 may have helped to bring attention to maintenance and operational issues plaguing Delray Beach’s aging water plant — which has not seen a major upgrade since the early 1990s.
Correspondence between members of the city’s Utilities Department and county health officials responsible for ensuring state regulations for safe drinking water are followed, as well as internal city documents, detail how a series of malfunctions and missteps led to the unwanted release of sediment in March.
These documents, along with reports filed by health inspectors, highlight maintenance issues that likely contributed to the release of the discolored water. These issues were a concern to regulators.
Since the appearance of the slug, the city has taken a series of steps to address a variety of issues, including long overdue cleaning or the scheduling of cleaning of groundwater storage tanks and repairing malfunctioning equipment.
In June, Hassan Hadjimiry came on board as Delray Beach’s utilities director, filling a spot that had been vacant for 14 months since the departure of Marjorie Craig in April 2019.
Hadjimiry, who had been deputy director for the Palm Beach County Water Utilities Department, is well respected by utility directors in Delray Beach’s neighboring communities.
With the departure earlier this year of the water plant manager and a supervisor, one of the city’s deputy directors of utilities has been given expanded oversight of the plant’s day-to-day operations.
“We’re watching the plant much, much more than ever before,” says Hadjimiry.
The city also has sent out notices and used social media to assure residents that the drinking water is safe. On its website, the city points out that the water is tested daily and assures compliance with all state safe drinking water regulations.
“The water we send out meets all state standards,” Hadjimiry said.

Sediment in the water
It was about 10:30 p.m. March 26 when a telemetry system, which uses an automated communication process to collect and send remote data, failed to forward real-time information about a storage tank abnormality to plant operators, according to information provided by the city.
A low-level shut-off system at the groundwater storage tank serving the city’s north side also failed to work properly, allowing water levels in the tank to drop to about 3 feet, far below the normal 7- to 12-foot level, according to the city.
When that occurred, sediment that accumulated at the bottom of the tank seeped into the drinking water.
The plant operator at the time noticed that the telemetry system was not working but didn’t visibly inspect the tank, according to Deputy Utilities Director Bryan Heller.
The problem was not noticed until 7 a.m. the next day when the day shift came in, and city utility leaders didn’t become aware of the issue until after residents began calling to complain about cloudy or discolored water, according to information obtained from the city.
The Utilities Department was able to move the water from the north storage tank to another tank and discharge it into a pond from there.
Heller said that senior utilities department managers were not notified of the incident shortly after it was discovered. He said that had the information been forwarded sooner, hydrants could have been flushed before the slug reached customers.
A notice was sent to residents of the north end of the city, who were told that the water was safe but not treated to the city’s color and taste standards. The city advised residents who continued to have problems to run their water for about 10 minutes and flush the system.
The sediment that entered into water lines was likely from an accumulation at the bottom of the storage tank of tiny particles of minerals found in water, particularly lime, which is used in the city’s lime softening treatment operation.
“There’s nothing in that tank that isn’t already in the water,” said Colin Groff, Boynton Beach’s assistant city manager for public services, who oversees water treatment operations.

Maintenance issues
What may have been an issue in Delray Beach, however, is the quantity of the sediment in the tank — which has a capacity of about 2 million gallons — and how long it had been there.
Under state Department of Environmental Protection regulations, groundwater storage tanks must be inspected and cleaned every five years. Yet in an April 20 memo to then-City Manager George Gretsas through an assistant city manager, Heller wrote that the slug may have been caused by noncompliance.
“The sediment was the result of the north storage tank having not been cleaned every five years as required by regulation,” Heller wrote in the memo, in which he recommended disciplinary action against then-water plant manager John Bullard.
In the memo, Heller also noted that two other water storage tanks at the main water plant did not appear to have been cleaned every five years.
The memo also makes reference to a failure of the water plant operations team to clean the clear well — a large tank below a series of filters that contains water as it flows through the treatment process. The clear well, however, is not subject to the same five-year inspection requirements as are water storage tanks.
“The tank inspection report for the clear well, dated May 12, 2016, specifically indicates the presence of ‘large accumulations of silt, sediment, and other debris. This accumulation of debris should be removed immediately to help prevent future water quality testing issues,’” Heller wrote. “When Bullard was questioned about the clear well sludge, he indicated it had not been cleaned since 1972.”
The city since has cleaned the north tank and has scheduled cleanings of the two south tanks at the end of this year or early next year. It also has scheduled the cleaning of the clear well, which is expected to take a week and should not interfere with service to residents.
Bullard, who started with the city in 1982 and became water treatment plant manager in 2000, resigned at the request of the city manager on May 6, according to Heller. A supervisor and operator involved in the incident both resigned on their own, Heller said.
Delray Beach utilities also made several corrections after a December 2019 state-mandated “sanitary survey” by the health department found 27 deficiencies in five areas. That number is considered high, according to utilities directors from other communities, but they say most of the deficiencies didn’t affect water quality issues.
Three of the deficiencies were considered significant. They included several wells not properly sealed, filter walls leaking and vents missing proper screens, city records show.
In a Feb. 13, 2020, memo, Heller addressed each of the issues and documented improvements to the three significant issues as well as all others, which ranged from labeling unmarked chemical storage areas to removing algae and bio-growth from exterior portions of the plant.
In neighboring communities, utilities keep regular maintenance schedules to ensure tanks are clean and sediment is removed. Boynton, for example, does not wait for the five-year intervals as required by state regulations to do maintenance on tanks.
“We clean our tanks when they need to be cleaned,” Groff said.
Both Boynton Beach and Boca Raton have been through major upgrades to their water treatment and distribution systems, with Boynton Beach spending about $55 million for a renovation and increased capacity in 2017 and Boca Raton spending about $20 million on a water system upgrade within the past five years.
Delray Beach has not done a major upgrade at its plant for more than two decades, but Hadjimiry says the department is planning significant improvements in the next year, including replacing major filters used in the lime softening process that are critical in assuring high water quality.
He said the department is also focused on preventive maintenance and building an inventory of spare parts.
Although an engineering study authorized by the City Commission in 2019 found that a new plant using reverse osmosis and nano-filter technology could be built for as much as $132 million, Hadjimiry says he is leaving the door open as to what should be done with the plant and is exploring all options.
“Right now we’re looking at determining what is the most we can do with what we have in order to get the best quality of water,” he said.