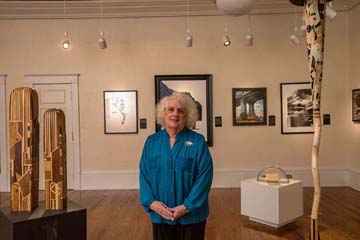 For 25 years, artist Gloria Adams has brought eclectic and engaging collections of art to the Delray Beach Center of the Arts.
She’s served as director of the Cornell Museum of Art since it opened in 1990.
Before the museum opened, she worked as administrative assistant for all of Old School Square, the original name for the Delray Beach Center for the Arts.
“Everything I do on a daily basis feeds my soul,” says Adams from her office at the Cornell Museum, which she was expected to leave at the end of April for her retirement.
She enjoys discovering unknown talents, working with her “priceless” volunteers, and keeping her office door open for visits from the community.
“The fun part of this job is the people you meet and the experiences you have,” Adams says. “Every day you wake up and it’s an adventure.”
And there’s the excitement of creating new exhibits and showcasing them in the Cornell Museum, a restored and renovated 1913 Delray elementary schoolhouse with rare Dade County pine floors and tall windows.
“Every time you get an exhibit, it’s like Christmas morning,” Adams says.
Under Adams’ guidance, the Cornell Museum has hosted a wide range of art and American cultural exhibits over the years.
“We’re a pretty eclectic museum. And we pretty much can do everything. And we have,” Adams notes. “Just about anything that comes across that would interest the public.”
From teddy bears to Barbie dolls to pirates; from military miniatures to wood carvings of birds; from art showcasing local Delray and Florida history to the museum’s first national juried exhibition, featuring glass, jewelry, oils, photography, sculpture and watercolors from artists from across the United States — the Cornell Museum has spotlighted it all.
Adams got the idea for what became her favorite exhibit watching a George Carlin comedy bit about people’s stuff.  Inspired, she invited the community to “bring us your stuff.”
And they brought it. Betty Boop dolls, Victorian jam jars, stamps, purses, hats: All kinds of cherished items from people’s homes were contributed. Soon there were memory walls for the 1940s, ’50s and ’60s. But Adams still needed a star, a standout to make the exhibition complete. Into her office walked artist Jay DePalma, who creates gorgeous, graphite drawings of the glamour girls of the ’40s, ’50s and ’60s.
“The same day, he brought them in,” Adams remembers.
“I can’t tell you how I do a show. It just sort of falls into place.”
Joe Gillie, president of the Delray Beach Center for the Arts, says it is Adams’ own creativity that brings together the exhibits. Adams knows how to find works of art and she knows how to work with the community.
“For us, Gloria has been the consummate professional. She has been able to transform this museum into something the community really cares about,” Gillie  says. “And she’s been able to do it on a shoestring budget and that’s amazing.”
Adams has the Cornell Museum booked until February 2015 with shows including a paper as art exhibit and a “red, white and beautiful” quilting exhibit from Gold Coast Quilters.
After 25 years focused on creating exhibitions of other people’s art, Adams, a watercolor artist, will be picking up her paintbrush this summer.
“I’ll probably start painting again. Volunteer somewhere. Spend the summer with my grandchildren,” Adams says.
Will she still contribute to the Delray Beach Center for Arts?
“Oh yeah! It’s in my blood. Morning, noon and night for 25 years! How could I not? I’ll be around.”