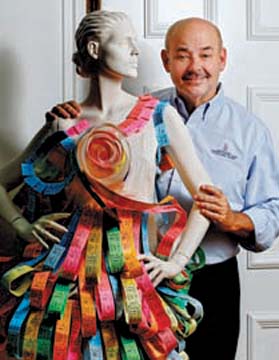 poses with a mannequin wearing a dress by Delray Beach designer Amanda Perna. 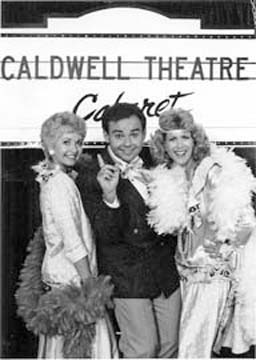 starred in Gold Diggers Revue at the 1989 Mizner Festival.

Joe Gillie’s life as a teenager in Danville, a Virginia mill town, was typical. He sang in the church choir. He appeared in a school production of Meet Me in St. Louis. He wasn’t particularly fond of school.
But life is filled with unexpected and serendipitous turns. After turning away from an expected life on the fourth shift at the mill, first one way then another, he was drawn back to an old schoolhouse. In 1992 — after nearly three years on the board — Gillie accepted an appointment as president and CEO of Old School Square Cultural Arts Center in Delray Beach. The next year, he opened the Crest Theatre, spearheading Old School Square’s rebirth and creating the magnet for a sleepy city’s transformation.
But in September, with 25 years behind him and more turns to take, Gillie retired. On Nov. 8, a “few” friends will say “Thanks for the Memories,” a night of parties and performances. He agreed only on condition that it serve as a fundraiser for the center.
While the retirement is official and he has an overflowing bucket list — he just returned from a month in Australia, New Zealand and Fiji — Gillie will not disappear. The path will always bring him back, but along the way he looks forward to the next surprise around the corner.
Danville was the classic Southern town. The soil along the banks of the Dan River was ideal for growing tobacco. The river’s falls powered the mills that cranked out textiles to the world. Though always among the state’s 10 largest cities, its population never exceeded 55,000, but it boasted more churches per square mile than any other town in Virginia. Many streets were lined with stately mansions built by the mill owners and managers, just blocks away from the workers’ crackerbox row houses.
As sure as river rocks churned up the rapids, tradition and mores dictated that Danville’s children likely would grow up to run the mills or work in them.
Joe’s mother was a stay-at-home housewife; his father drove a Trailways bus, three times a week to Washington, D.C., and back.
“My dad drove 38 years for Trailways, 2 million miles, and he never had an accident,” Gillie said proudly. “Things like that influenced my life. Both of my parents had a great sense of humor. They left little notes to each other and they didn’t hide ’em. It was great stuff.
“We didn’t have people in the mill, but the town was THE MILL. It was still a great town to grow up in. You get small-town values; you get that sense of belonging in a community; you experience that ‘it takes a village’ thing on a daily basis.
“If my mother wasn’t watching out for me and my two brothers and the other kids in the neighborhood, somebody else was. You learned that there are consequences to your actions. In Southern communities, you didn’t mess around. You thought before you did something.”
Gillie thought long and hard about his prospects. He wasn’t a great student, but Averett College in Danville was more appealing than the mill. Established in 1859 as Union Female College, it converted in 1967 from junior college to four-year school and became co-ed. Gillie broke the news to his parents that he was interested in art, architecture, religion, maybe even preaching part-time.