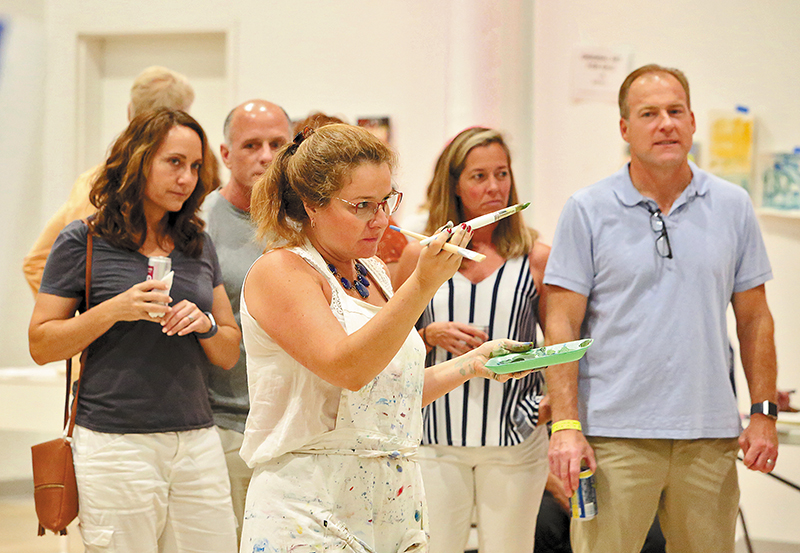 Luciana Boaventura of Delray Beach plans her next move as she paints during the inaugural Art Throwdown fundraiser at the Arts Warehouse. Photos by Tim Stepien/The Coastal Star

Imagine preparing for a day’s work at your place of employment. But as you walk into your office, you are met by 200 inquisitive guests wanting to find out what you do at work and how you do it. There is a DJ in the corner blasting out feel-good vibes, inspiring guests to tap their toes, sing along with the lyrics or break out in dance. Those curious guests could also purchase pizza, drinks and visit a popular virtual reality booth with a long line to prove it.
That was the scene on June 7 at the Arts Warehouse in Delray Beach during the first Art Throwdown & Monster Drawing Rally and fundraiser. Four local artists tested their concentration and creativity by drawing or painting any subject they chose during a 90-minute session and using limited supplies. All the while, curious onlookers and reporters asked questions. The artists were trying to block out the clatter of conversation that at times approached commotion status.
“No, I’m not really comfortable,” said Luciana Boaventura, a Brazilian artist living in Delray Beach. She was declared the winner of the event as determined by the amount of applause each contestant’s artwork received from the crowd of approximately 200. “Oh my gosh, this is fun. But I am not comfortable.”
But Arts Warehouse Director Jill Brown looked very comfortable as she patrolled the 3,000-square-foot hall, handling announcements, checking on the vendors and the four contestants, and offering encouragement to the 20 or so amateur artists who were not contestants but were working on their own creations.
“We just want to give the people the opportunity to create,” Brown said early in the day. “We want people to come in shorts and flip flops and have fun and experience what we are. Tonight, the spectators get to see the process of creativity and they are also able to purchase some original art.” 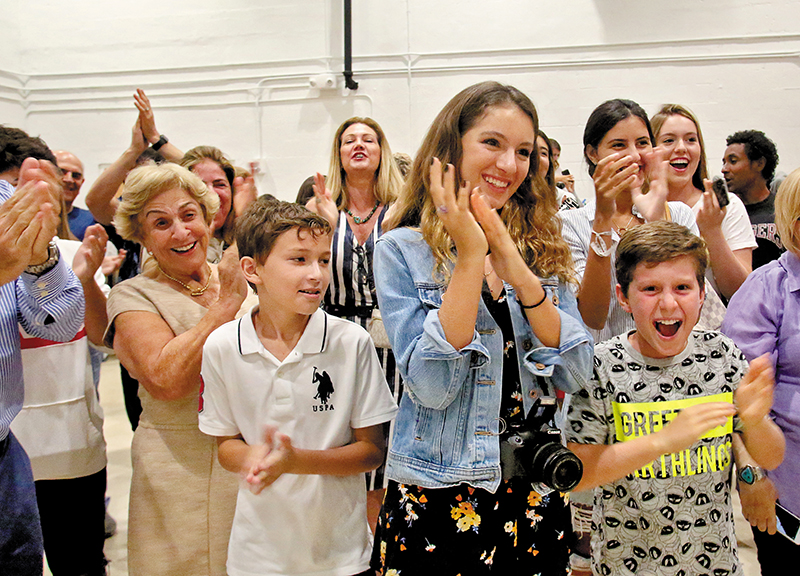 Her friends and family applaud and cheer as she is announced the winner among four artists. The fans include (l-r) Joshua Longhi, Luciana’s daughter, Gabriela Boaventura, and her son, Luis Fernando.

All the artworks, by both amateurs and pros, were hung on the Buy Wall with the beginning price of $30. A bidding war began on Boaventura’s floral-painted creation, which ended up selling for $275.
“I’m still not really comfortable,” she said after receiving first-place prizes of a belt that looked like it was stolen from a professional wrestling champion, a trophy establishing her as the 2019 winner and the invitation to defend her title at the next competition in 2020. 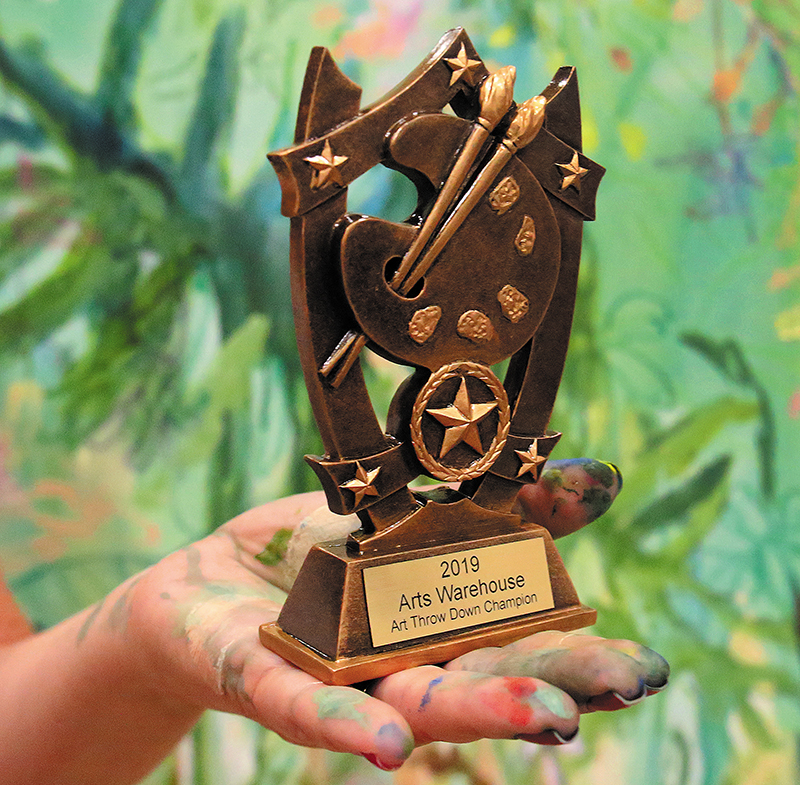 One of Luciana’s awards was a trophy. Her floral painting sold for $275.

“But I’m much better because we are finished. I didn’t have an idea of what I was going to paint because I wasn’t sure of the materials I would get. But I got inspired by nature. The florals kind of inspired me. I tend to get inspired by science and try to find the path of the right and left brains. So, I would listen to the painting. I do a lot of florals. I love the colors.”
Batia Lowenberg, a New York artist who has lived in Tel Aviv and currently resides in Boca Raton, was working well with the people and the commotion. She danced to the music while putting the finishing touches on her painting, which revolved around ladders.
“I have never done this artist throwdown,” she said. “In fact, I don’t know anyone who has done it. So, it is going to be fun. I don’t consider this throwdown as a competition. This is a creativity. Artists are my brethren and getting together with a lot of artists is just fun.”
Gregory Dirr, a Boca Raton painter, was nonchalant about all the excitement as he tried to channel a Bob Ross painting. Ross was the creator and host of the PBS show The Joy of Painting, televised from 1983 to 1994.
“I’m used to the distractions. I do a lot of outside work,” Dirr said. “This is not finished. I usually like to refine and go over and over it. I just wanted to do a Bob Ross painting, just to give a hint or an idea of an image.”
Eric Karbeling, a painter from Miami, found the atmosphere relaxing.
“There are a lot of distractions, but I like that,” he said. “I had an idea what I wanted to do and after that it was just a question of what colors to use.”
The Arts Warehouse, which opened in 2017, is a 15,000-square-foot, renovated warehouse building in the Pineapple Grove District in Delray Beach. It has 18-20 rented-out artists’ studios. The two-story building also has gallery space for exhibition shows.
“We didn’t have any monetary goals this year,” Brown said. “Our goal was to create awareness for the arts community. We started this day at 7 a.m., and this entire organization came together to make this a great day. I’m really pleased with the turnout and the interest. It was a real eclectic crowd. I had a lot of great feedback, lots of people said they were looking forward to next year’s event and other events we have planned.”