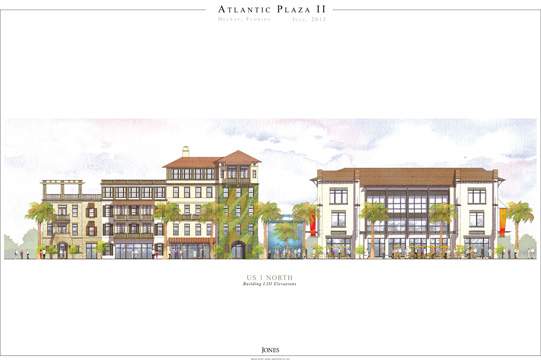 The proposed Atlantic Plaza II would have 442 residential units, plus office,
retail and restaurant space near the Intracoastal.  Rendering provided

The Atlantic Plaza II mixed-use development would exceed Delray Beach’s density and height under a new proposal, which drew pleas from residents to respect the surrounding area and Veterans Park.

Following resident protests at a packed Sept. 24 meeting, the Planning and Zoning Board postponed its vote on the request for a month, asking the developer to return after reflecting on the feedback from the board and the public.

“We all want this project to be viable,” said board member Craig Spodak. “It needs some reworking.”

The project’s height would surpass a 48-foot limit, reaching nearly 60 feet, while the density would climb from the allowed 30 residential units per acre to 51.1 units, according to plans presented to the Planning and Zoning Board.

The $200 million, 9-acre project, which is next to Veterans Park on East Atlantic Avenue, must also still undergo a review of its newly submitted site plan. Developers hope to start construction by the end of the year.

The new plan proposes 442 residential units, compared with the 197 that the city allowed in Atlantic Plaza’s last approved site plan.

The current plan has 79,071 square feet of office space, 52,021 square feet of retail and 28,204 square feet of restaurants. The six buildings in the plan range from three to five stories and include two pools and a “green roof.” Residents at last month’s meeting voiced concerns about the project’s height and density, drainage problems, additional traffic and that the area would be less walkable than the rest of the downtown. They also contended that Veterans Park would be in shadows much of the afternoon and that getting to the park would be more difficult.

The added residential cars and the delivery trucks, including for food and liquor, will crowd the city’s streets, said resident Ed McCall. “This is not going to improve the quality of life of Delray Beach.”

Bob Ganger, past president of the Florida Coalition for Preservation, said his organization’s purpose is to preserve the lifestyle of people in coastal communities. “Adding more density is going against our cause.”

Some residents as well as board members focused on LEED certification.

“We should mandate this developer to get LEED certification,” said board member Spodak, echoing others at the dais as well as some in the audience. “It should be incumbent for all developers who come in with a project of this size.”

The developer could “use the elements spelled out in the LEED program to enhance the project,” said board member Jan Hansen.

Board members were looking for more information on how the project would address fallout of increased density, including impacts on schools, traffic and parking.

Board member Thuy Shutt wanted to see school concurrency addressed as well as to know whether the developer was marketing to families or non-families. In addition, she added, “I’d like to see more strategies to relieve some of the single-user vehicles here.”

At the meeting’s end, developer Edwards said, “A lot of what has been suggested … can be accommodated.”

Edwards is one of four joint-venture partners on the project. The local private equity firm CDS International Holdings, owned by Carl DeSantis, is also on the team, as well as resident and local developer Bill Morris and Mike Covelli.

The Planning and Zoning Board is an advisory board that makes recommendations to the city commission, which then approves or denies requests.