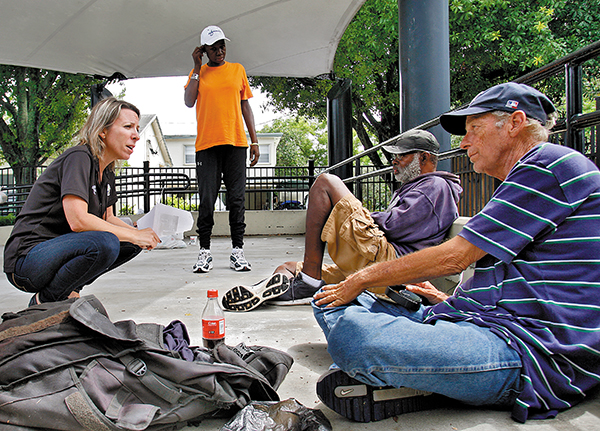 Soon after she arrived in Delray Beach as the Police Department’s new community mental health counselor, Ariana Ciancio did something no one else from the city had time to do before.
She met with a longtime homeless woman well known to police officers throughout the city, sat down on a garbage bag next to her and mainly listened.
Before their 45-minute conversation was over, Ciancio had learned a lot about the woman, her background and even about her family members, some of whom Ciancio has since contacted.
At the same time, Ciancio was building a relationship based on trust and letting the woman know that the city now had someone there to help, if she wanted or needed it.
“It was just a very comfortable, candid conversation,” she said.

For Ciancio, a licensed mental health counselor and certified addiction professional whose focus will be on working with the city’s recovery community and the growing homeless population as well as those with mental health issues, the job is a perfect fit.
“I have a love for this,” she says. “It’s all I’ve done all my life. I can just naturally connect with people.”
Ciancio, 46, has seen the deadly effects of drug abuse firsthand from the time she was in high school.
“My very best friend died of an overdose last year,” she said.
Ciancio’s newly created position of service population advocate is what Police Chief Jeff Goldman calls “another tool in the tool box.”
Delray Beach, an epicenter of the opioid epidemic and a community that has received more than its fair share of publicity because of its sober home crisis, has been on the leading edge of finding successful ways to address the problem, Goldman said. Hiring Ciancio, he believes, is just one more step in the right direction.
The Police Department was one of the first in the state to equip officers with Narcan — a drug that can revive people who overdose — and Goldman believes it’s the first municipal law enforcement agency in Palm Beach County to have a full-time community advocate addressing social issues.
The position, which costs the city between $50,000 and $70,000 a year, is an investment that Goldman says will pay dividends.
“It will help our department be more effective and more efficient,” he says.
He cited one situation where police officers have responded 13 times in just a few months to help a family struggling with a relative who suffers from mental health problems.
“There are a lot of social issues that are a drain on our services,” the chief said.

Social, legal situations overlap
Over time, Goldman said, the line between social problems and law enforcement issues has blurred.
“The heroin epidemic is a social issue, but eventually everything becomes a law enforcement issue,” he said. “People always ask our officers where they can go for help, and they don’t always know.”
Now those needing assistance can turn to Ciancio, who in two months on the job has been busy with calls from local people trying to find a place for those in recovery and from parents from out of state worried about their children in recovery.
Just last month, Ciancio was contacted by operators of two sober homes that were closing down who hoped to find spots for the two dozen individuals who had been staying there.
“In the past,” Goldman said, “24 people would have been on the street.”
Another key role for Ciancio will be to try to reduce the number of individuals who overdose, are revived by the drug Narcan, but later overdose again.
In some cases, she will follow police officers to the hospital and meet with the individual who overdoses right away. In other cases, she will schedule follow-up appointments.
Her message to them — and to everyone else — is: “I’m the advocate from the Delray Beach Police Department and I’m here to help you.”
Ciancio is discovering that finding help for everyone in need is a challenge because Palm Beach County has a limited supply of available beds for those in emergency situations or people searching for a detox or recovery program.
She’s also finding that the demand for help in Delray Beach may be more than one person can handle and as a result, the department is in conversations with leaders of Florida Atlantic University’s social work program to discuss internship opportunities.
She is working with other agencies to increase opportunities and is developing a pamphlet that will list agencies available to help people in need.
Helping people — and building bridges — is something Ciancio has been doing for more than two decades. She came  to Delray Beach after spending 17 years with the National Council on Alcoholism and Drug Dependence in New Jersey.
A New Jersey native, she came to Florida to get an education, first at Florida Atlantic University, where she received a bachelor’s degree in psychology, and later at Nova Southeastern University, where she received a master’s degree in mental health counseling.
Ciancio, who has been married for 16 years and has an 11-year-old son and a 14-year-old daughter, had always wanted to return to South Florida.
Ciancio said her work in Delray Beach is similar to what she did in New Jersey, but with new challenges and perhaps greater urgency.
“I always find myself in places where I feel I’m needed,” she said.