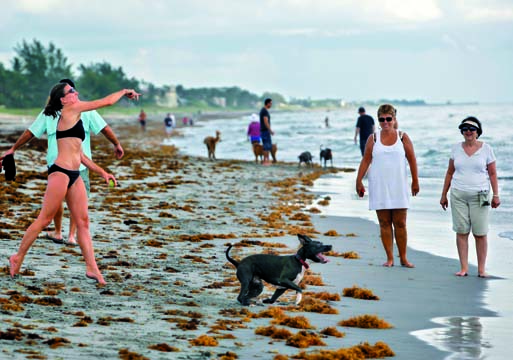 INSET BELOW: A digital sign on A1A proclaims ‘zero tolerance’ for offenders.

Delray Beach resident Rick Rubenstein was surprised when the police officer approached him as he walked with his three Yorkshire terriers on Delray’s public beach and told him that he was breaking the law.
He was even more surprised when the officer handed him not one, but two, $50 citations for violating a municipal ordinance that prohibits animals on the city’s beach.
“I was totally blindsided,” said Rubenstein, who had walked Spencer, Madison and Mr. Chow regularly on the sand. “I never saw the sign that said no animal on the beach.”
Now the city is making a concentrated effort to get the word out that residents should take pause before letting Fido splash in the surf.
After an email was sent to Mayor Cary Glickstein and commissioners by resident Mark Fix — who was concerned about an increase in the number of pets he saw along the ocean — Parks and Recreation Director Suzanne Davis assembled a task force to ensure that word was getting out about the city’s ordinance.
“Our goal is to provide a positive experience for all of our beach patrons,” Davis said.
According to Fix, his concerns are as much for the safety of beachgoers as they are for making sure the beach is free of pet waste.
“I am tired of wondering if the large, unleashed animal running towards me on the beach is the ‘friendly’ dog or the violent out-of-control dog,” he wrote.
What may have seemed simple on the surface — getting the word out and enforcing the municipal code — has turned out to be a little more complicated, especially since there are some questions about the scope of the city’s jurisdiction.
“One of the first things we have to do is clearly define where the municipal beach begins and ends,” Davis said.
For years, the beach behind private homes just north of the end of the public sidewalk east of State Road A1A has been known as “dog beach,” where dogs romp freely.
Davis said the city is trying to determine if the beach ban on pets applies to that area.
“People have been going there with dogs for years,” she said. “We don’t want to take that away if it doesn’t fall under our ordinance.” 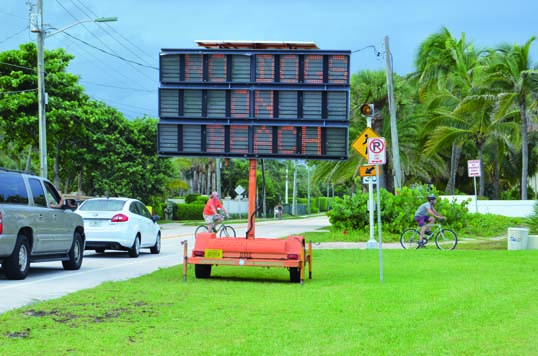 Davis said the team — comprised of representatives from the Police Department, code enforcement, public information, and parks and recreation — is also working on making signs more visible.
Existing signs near the sidewalk on A1A list a variety of beach rules and make it clear that animals aren’t permitted on the public beach. Stand-alone signs posted in the same area also point out that animals are not allowed east of the dune line.
But Davis is exploring the possibility of posting signs in the sand — east of the dune line — that would be hard to miss.
Last month, the city positioned a large electronic billboard sign on A1A to inform people about the ordinance, proclaiming “zero tolerance” for violations.
From July 1 to Sept. 24, nine citations for violations of the city code prohibiting dogs on the beach have been written and recorded by the Police Department, according to the records division.
Davis said the city is also studying how other cities deal with the issue.
While Boca Raton has a portion of public beach set aside for pets, that solution seems unlikely in Delray Beach. In December, city commissioners voted down the idea of creating a designated dog beach on the municipal beach.
Efforts to bring the issue back to the surface have gone online with a petition on Change.org drawing about 300 signatures. Organizers of “We Want a Dog Beach” are hoping to collect about 500 names before taking the petition to City Hall.
While a long-term solution is sought, Davis and the task force have taken steps to spread the word about the law. The city issued a news release and also put a notice on TripAdvisor, countering posts that made it seem as if dogs were welcome on the municipal shoreline.
For residents like Rubenstein, who paid his tickets the day after receiving them back in June, enforcement of the no-dogs-on-the-beach rule put some cold water on his warm feelings for the city.
“It took away a little bit of the joy of living in Delray Beach,” he said.
He also expressed concern about the way he was treated, saying he was told he had to carry his three dogs off the beach.
“It was embarrassing,” he said. “I was treated like I just kidnapped the Lindbergh baby.”