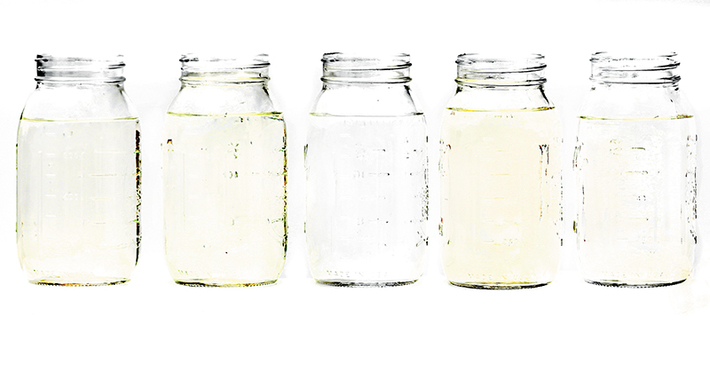 Yellow tap water may be safe to drink, but Delray residents are still concerned

The video posted on Facebook by the city of Delray Beach on April 21 appeared simple enough.
For what seemed like the umpteenth time, Delray leaders set out to explain why the city’s water is often discolored, and to once again assure residents that the water is safe to drink.
Instead of quieting down critics, however, the video unleashed a firestorm of negative comments, many taking on a political undertone and pointing fingers at current city leaders.
“Water is supposed to be clear and that’s the bottom line,” says Tracy Caruso, a former mayoral candidate and an outspoken critic of how the city is dealing with water that at times comes out of the faucet with a green or yellow tint. “I’ve never been told to drink a glass of yellow water and been told it’s OK.”
City leaders want to be clear, even if the water isn’t. They agree that there’s a problem with water color, but say they are disheartened by the steady drumbeat from people who are fostering distrust in the safety of the city’s water. The water, which is tested daily, meets or exceeds all government standards, they say.
The only real solution to significantly reduce the yellow and green tints that cloud Delray’s water, say people in neighboring cities who are responsible for having clear water come out of taps, is for Delray to replace its obsolete 70-year-old water treatment plant with one using more up-to-date methods.
That’s on the drawing board but it will come at a high cost, one that residents will initially start to see in their water bills as early as July — while a new plant won’t be up and running for at least four years.

An erosion of trust
How did the color of water become such a hotly debated issue in Delray?
Part of it, city leaders say, is due to an erosion of trust in the city’s overall ability to provide safe drinking water.
Politics, of course, is also a factor, with water quality issues being raised in the last municipal election and expected to be raised in next year’s March election.
“I understand that people may have a trust issue in light of past practices, but in the short term the city has taken necessary steps to make sure the water meets or exceeds all health advisory standards,” says Commissioner Juli Casale, who is up for re-election in March and has been the target of many of the critical comments after she reposted the city’s video. “In the long term, a new water treatment plant is in the works.”
The lack of trust stems from a series of issues that have plagued the city’s Utilities Department in recent years. They include:
• Treated wastewater entering the drinking water supply and leading to a $1 million fine.
• Sludge from the bottom of a water storage tank making its way to people’s faucets.
• A complaint from a whistleblower charging the city failed to report required issues to state regulators.
There also are critics of the city’s water treatment process who are concerned with PFAs, man-made chemicals that some studies show are harmful to humans. The city says the level of PFAs in city water falls below the danger level set by the federal Environmental Protection Agency.

The color of water
At least one utilities director in a neighboring city, who has faced concerns with off-color water before, says Delray would be wise to resolve the color problem.
“Yellow water isn’t going to harm anyone but the perception is that it’s not clean,” says Chris Helfrich, Boca Raton’s utilities director. “You want to be able to drink a clear glass of water.”
Helfrich knows firsthand how important it is for drinking water to be devoid of color. Back in the mid-1990s, Boca Raton built a new water treatment plant, in part as a response to complaints about discolored water.
That plant, which uses membranes to filter out color-causing particles as well as other impurities, has helped the city achieve a level of between 4 and 5 color units in its water, which is well under the maximum 15 color units included in the EPA National Secondary Drinking Water Regulations standards. Those regulations set non-mandatory standards for 15 contaminants, including color, chlorides, iron and odor.
Delray Beach, which also supplies water to Gulf Stream, reports its water coloration hits as high as 12 units. Boynton Beach has two treatment plants, with its east plant that also supplies Ocean Ridge having a level of 8 units, while water from its west plant has a level of less than 1 color unit. The city of Delray Beach is working on plans to replace its 70-year-old water plant. A new plant could cost more than $130 million, and residents are likely to begin paying for it through higher water bills starting this summer. Photo provided

The different processes
Delray Beach’s plant uses a lime softening process to treat water and filter out most of the impurities, but it does not remove nearly as much color as the Boca and Boynton plants.
In Boca Raton, a portion of the city’s water is treated with a lime softening system similar to Delray’s, but then the water is combined with water that is treated using a membrane filtration system that removes more of the impurities.
Boynton Beach’s two treatment plants use different technologies, according to Utilities Director Poonam Kalkat. The east treatment plant uses lime softening combined with an ion exchange system that pulls impurities out of the raw water. The city’s west plant uses a membrane filtration system similar to that used by Boca.

The stuff in the water
On its website, Delray Beach explains that the color of finished water is determined in large part by the raw water it draws from the aquifer. That water contains what Boca’s Helfrich refers to as organic particles — minerals as well as residuals of vegetation in the water.
“Things decay over time,” he says.
Some Delray Beach wells have fewer organics than others, but state and federal restrictions limit the city’s options when it comes to pumping.
“Finished water color is greatly influenced by the color of the raw water from the wells running at the time,” the city’s Utilities Department said in an email response to questions from The Coastal Star.  “The City is not allowed to only pump raw water from the wells with the least amount of color.”
Another factor that can affect water color is the age of pipes that bring water from the city’s connection to a property. Those pipes, which are the responsibility of property owners, can be galvanized steel that rusts and can cause discoloration in water, especially in older dwellings.
The Coastal Star recently drew water from a home built in 1937 that had galvanized pipes feeding the kitchen sink, but PVC pipes, installed during an update, feeding the bathroom sink. There was a noticeable difference, with the water from the kitchen faucet having significantly more color.

Testing the water
The discoloration in the water leads to further distrust of the water treatment process as a whole. Critics like Tracy Caruso question the daily testing process that the city conducts in-house to ensure water quality.
“One of the mistakes is that there hasn’t been enough oversight,” she says, adding that she would like to see outside government agencies more involved in the testing of water.
In fact, in a letter to Delray Beach Utilities Director Hassan Hadjimiry, Caruso’s husband, state Rep. Mike Caruso, offered to reach out to the Florida Department of Environmental Protection to assist if needed.
In the email to The Coastal Star, the city said that its testing process is overseen by state regulators.
“The Florida Department of Health has observed samples being collected, that are then sent to outside laboratories,” the city said.  “In addition, the water utilities laboratory participates in proficiency testing every year and auditing every two years to maintain its certification.”
For his part, Boca’s Helfrich says the in-house process used by most water treatment facilities is very reliable.
“There are too many checks and balances to skew the data,” he says. “I can’t fathom a way to cheat without getting 10 people involved.”

Water bills going up
Delray Beach city leaders are still developing plans for a new water treatment plant and have not decided what type it will be.
Whether the city goes with a plant like Boca’s or one like Boynton’s, Casale says residents can be assured that the plant will have a system that filters out color. Early estimates are the project could cost somewhere between $130 million and $145 million.
Where that money will come from is still something the city needs to figure out. Federal and state grant money and other funding most likely will be available to help.
Water users will be picking up much of the cost as the city prepares to raise its water rates. City commissioners plan a final vote on the proposed rates in June that would raise the bill of the average user, calculated to be a resident using 6,000 gallons of water a month, from $57.85 to $75.66 monthly by 2026.
That still would keep the city rate, which hasn’t been raised since 2009, below that of neighboring cities. But former Delray Beach City Manager David Harden, speaking before the commission, said those numbers don’t tell the whole story.
He’s concerned the increased costs will be far more for homeowners who don’t have access to reclaimed water to irrigate their lawns. He said the monthly $72 bill he paid at his former home on Swinton Avenue would jump to about $164 a month in 2026 under the new rates.

The impact of rhetoric
While plans for a new plant are being developed, both Tracy Caruso and Casale are hoping to see the messages the other is sending out toned down.
“The first thing they need to do is stop putting out information saying water with color is normal,” Caruso says. “Yellow or green water is not normal.”
Caruso said she also is concerned that some city leaders, including Mayor Shelly Petrolia, have encouraged residents to purchase water filtering systems if they’re unhappy with city water.
Casale says she is worried about the impact some of the rhetoric from the other side is having on residents, some of whom buy bottled water rather than drink what comes out of their faucets.
“It’s very upsetting seeing people purchasing water they could not afford because they were being told they should not drink the water,” she says, referring to tap water.