A look, then and now, at the Delray Beach hotel site at the northwest corner of State Road A1A and Atlantic Avenue. LEFT: The Seacrest Hotel, circa 1925, which stood for 57 years. Photo provided by Delray Beach Historical Society. RIGHT: The newly refurbished Opal Grand Oceanfront Resort & Spa. Image provided

After 57 years as a steady landmark at the corner of State Road A1A and Atlantic Avenue, the Seacrest Hotel found its time had run out in the early 1980s.
Once a luxurious gathering place for wealthy Northerners who shunned the glitz of Palm Beach for the more relaxed ambience of Delray Beach, the 1925 hotel suffered from old age. By 1982 its decrepit condition was unrepairable and the Seacrest succumbed to the bite of the bulldozers.
Yet as Delray Beach evolved, a series of hotels would rise from the rubble, first as a Holiday Inn, then as a Marriott and now as the new Opal Grand Oceanfront Resort & Spa — each reflecting the community of its time and each taking the quality of the hotel up a notch.
With finishing touches being added to the multimillion-dollar transformation of the former Delray Beach Marriott into a 277-room, full-service luxury resort, one of the oldest and most sought-after hospitality corners — on both the beach and Atlantic Avenue — has come full circle.
“For almost 100 years there has been a hotel on this corner and it has played a significant role in this city,” says Mark Walsh, vice president of Delray Beach Ocean Properties Hotels & Resorts, which has owned a hotel on the Opal Grand site since the late 1970s.
Delray Beach’s renaissance from “Dull Ray” in the 1980s to the vital community of today influenced the evolution of the hotel.
But the influence was mutual.
“They go hand and hand,” Walsh says. “This location is Main and Main, it’s where you want something significant to the community.”
The Opal Grand certainly fills that role as Delray strives to remain a magnet for leisure and business travelers from around the world.
“We’ve become a world-class destination and the Opal Grand has been a reflection of that,” says Stephanie Immelman, president and CEO of the Greater Delray Beach Chamber of Commerce. “The hotel is a destination.”
As Delray lures more visitors and more hotels spring up to meet the demand, the Opal Grand stands out: It’s part location and part event capacity. The 8,000-square-foot ballroom, which can accommodate more than 500 people, received a significant upgrade during the transformation.
The Opal Grand, one of about 20 eclectic luxury resorts in Ocean Properties’ Opal Collection, has a concept that was in the works for several years, according to Walsh, although work on the complete renovation didn’t start until last year.
The vision, he says, was “to make it the best hotel on the beach you’ll find in South Florida.”
“This new look, this new feel — it’s what people are looking for now,” he said. “It’s casual elegance. You feel comfortable walking in wearing shorts and a T-shirt and you feel comfortable all dressed up.”
Visitors returning to the Opal Grand will notice changes before they even set foot in the door. The Mediterranean style of the Marriott has made way for what architect Gary Eliopoulos calls a Floribbean look.
“You want something that says Florida,” he says. “This is a coastal look.”
Inside, the lobby is bright and unusual — with swinging chairs, fountains, a water wall and check-in “pods,” rather than a long desk.
“It’s going to give you that wow,” says General Manager Julia Phillips, who is focused on ensuring guests — and even their pets — get the highest-quality service. “We want them to feel like they’re the only guests in the resort.”
Adjacent to the lobby is the Monkey Bar, an airy gathering spot, featuring a living wall with natural plants.
An Atlantic Avenue-facing restaurant, Drift, will be accessible from the street and the hotel, and is expected to be completed by late spring. The resort also includes two pools and a spa.
With the renovations has come an expected increase in room rates that reflects the product. 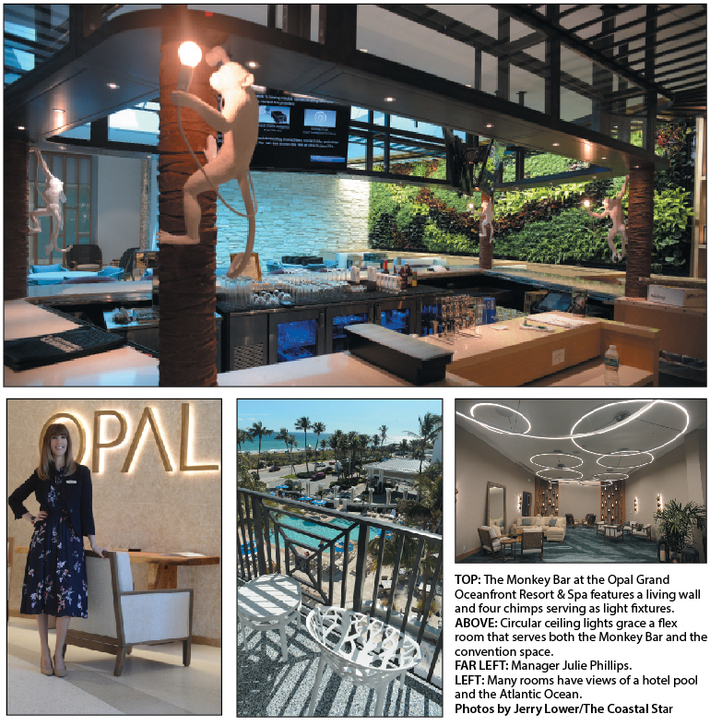 ‘A bet on Delray’
To better understand how far the property has come, just look at the challenges that faced Tom Walsh, the founder of the company now run by his children, when he sought financing in the early 1980s.
Walsh had purchased the 2.26-acre Seacrest Hotel site in 1978 after the hotel had been shuttered. But starting almost from scratch, he was able to reopen it in 1983 as the Holiday Inn Camino Real.
Lenders who were familiar with the growth of the hospitality industry in nearby Boca Raton were skeptical.
“There was no history of a new significant hotel in Delray,” Mark Walsh says. “It was a bet on Delray, that it would grow and expand.”
For the Walshes, the bet paid off.
The Holiday Inn, says longtime resident and former City Commissioner Bill Bathurst, helped Delray once again attract Northern tourists.
“It was the beginning of the tourism renaissance because people had a place to stay on the beach,” he says.
Ocean Properties expanded the hotel in the late 1990s and switched to the Marriott brand. It was during that expansion that the hotel added meeting space, becoming a destination for larger community events, local weddings and other celebrations, as well as meetings and conferences for out-of-town visitors.
Now, the Opal Grand is the next step in the evolution that began with the 1925 opening of the Seacrest Hotel.
“Delray has come a long way and so has this hotel,” Mark Walsh says.