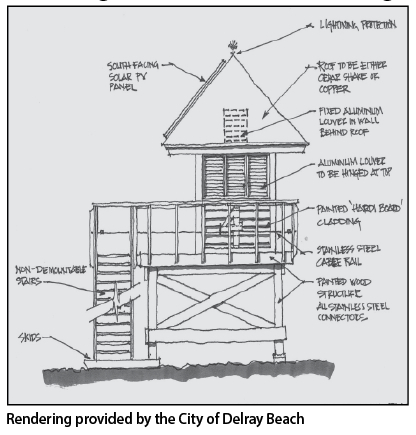 Delray Beach will soon have eight new lifeguard towers to match the recently finished $3.1 million promenade upgrade at the Municipal Beach.
City commissioners approved spending about $126,000 per tower by a 4-1 vote Dec. 11. The total cost of $1.2 million includes demolishing and removing the eight existing towers, adding skids to the new towers so they can move along the beach with the tides, putting lockable shutters over the impact-glass windows to close the towers overnight and having solar panels on the roof to provide power for police radios and to operate fans in the hot summer months.
“Our beach is getting more and more popular,” said Mayor Cary Glickstein. “I’m comfortable with the design. For far too long, this city has been penny-wise and pound-foolish when just looking at the dollars.”
Subcontractor Robert Cohen said, “You are building something in one of the most hostile environments.” He works for Post & Beam in Boynton Beach, which is employed by Hartzell Construction, the only bidder.
The city sent out 40 bid invitations, said Missie Barletto, deputy director of project management for the Public Works department. She thought the criteria too strict and the required experience was downgraded to: building six lifeguard towers and three wooden ones in the past 36 months.
One would-be bidder wanted the city to change the criteria to allow aluminum lifeguard towers, but those towers hold the heat in the summer, she said.
The cost is high, Barletto said, because of what the city wanted: stainless steel bolts, cedar shakes on the roof, fiber-cement siding, lockable shutters over the windows on each side of the tower and an “artsy look.”
The type of stainless steel bolts the city specified will have stainless steel all the way through, Cohen said. “Most other stainless steel bolts have a nickel base that is coated with stainless and then there are the galvanized steel bolts that are hot dipped,” he said.
The city insists on 100 percent stainless steel bolts to minimize maintenance, Barletto said.
The solar panels on the roofs also add to the costs. Ocean Rescue Division Chief Phil Wotton said the city lifeguards will use the solar panels to power public-safety radios that lifeguards use to call police or fire-rescue and to communicate with other towers.
In addition, the solar panels will be used to operate fans during the summer. “The lifeguards work 365 days a year,” he said. “They need fans in the summer to move the air because the [tower] floor is solid.”
Tom Leeman, an organizer of the city’s annual surf festival, said, “The pros need professional tools.”
The festival was held in early December in 2017. All of the money raised goes to support Ocean Rescue, he said. In its fifth year, nearly 2,500 people attended, he said.
The sad state of the city’s lifeguard towers was pointed out in early 2017 by Chris Heffernan, an investment adviser who has walked the beach daily for the past 20 years.
The towers have spider-webs of cracked impact glass, he said at the Dec. 11 commission meeting. “The fiberglass structures can’t be used in the summer because they hold the heat,” Heffernan said.
Even so, the cost of the lifeguard towers was likened to “a mini-condo on the beach without a bathroom” by Commissioner Shelly Petrolia. She voted against spending the money for the lifeguard towers, which will last 20 or more years.
Hartzell will need 90 days to complete all eight lifeguard towers. Each one will be painted a different, soft beach color to allow beach-goers to identify meeting locations by the color of the tower.
The first one will sit on the beach near the Atlantic Avenue pavilion entrance in time for the grand opening ceremony for the promenade at 10 a.m. on Jan. 27. That’s when the city plans to show off the new promenade and visitors center.
The promenade work — with its wider sidewalks, coordinated furniture and improved landscaping — was in the making for about 10 years.