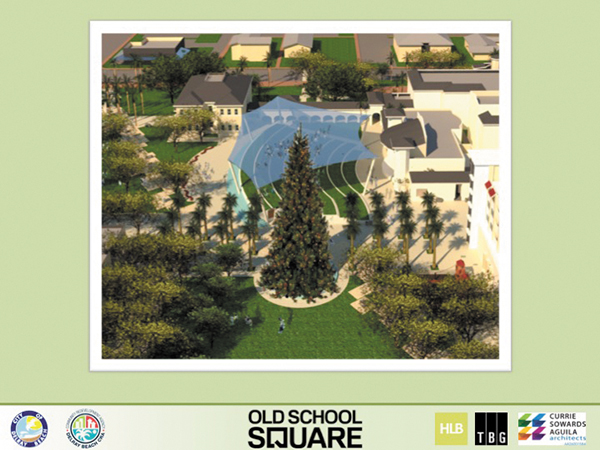 One of the options for the new location of the Christmas tree is on the lawn east of the pavilion grounds.

The 100-foot Christmas tree that dominated the Delray Beach holiday season won’t be used again. The tree’s steel frame is encrusted with rust, making it a safety hazard.
In its place, the city will spend nearly $1 million for a new 100-foot aluminum tree. Its color will be forest green, simulating an Oregon Cascade fir. The cost includes the purchase price, shipping from Oregon, an engineering study to build the concrete base and annual fees for installation and storage. That means the city staff will no longer be in the Christmas tree assembly business.
The tree also will have a new location on the city’s Old School Square grounds. At an early March meeting, the east lawn was selected as the ideal site. Currie Sowards & Aguila Architects were hired by the city’s Community Redevelopment Agency to continue with plans for the OSS grounds. Underneath the Christmas tree, the plans call for a year-round water feature.
Even so, John Morgan, the city’s environmental services department director, said he was going to proceed with the March 30 commission request to spend $9,900 to hire an engineer to do soil testing of the new tree site.
“In order to prepare for the 2017 holiday season events,” he stated in the reason why the request was needed now, “it is critical that the design for the foundation and electrical service to support the 100-foot Christmas tree in a new location on the Old School Square property move forward as soon as possible.”
Morgan received commission approval in late February for a sole source bid. There’s only one company in the United States that makes 100-foot aluminum Christmas trees and it is in Oregon. The cost is $790,000, he said.
The current Christmas tree was “rotting 20 years ago when we bought it from Parrot Jungle,” Mayor Cary Glickstein said at the Feb. 21 commission meeting.  He was responding to residents’ criticism of spending such a large amount of money on the 100-foot Christmas tree when the city has other pressing needs. “You won’t spend $800,000 out of your pocket on a Christmas tree,” Timothy Boykin said at the start of the meeting.
“The safety of our residents and visitors remains our No. 1 priority,” the mayor wrote in a mid-March email. “Due to the recent disclosure of the structural instability of the 100-foot tree, coupled with the time necessary to have it replaced, a decision had to be made immediately to ensure the safety of the community and the timeliness of having the tree to continue the long-standing tradition that many have come to enjoy each holiday season.
“The catastrophic structural failure of a 100-foot steel structure had the potential to kill or harm hundreds of people on any given evening.”
The 100-foot tree has become part of the city’s holiday tradition.
The top 50 feet was leased from Parrot Jungle in 1993 to help celebrate the city’s win of the All-America City award.
In 1995, the tree was purchased by the city’s Downtown Development Authority for about $80,000 and given to the city.
Two years ago, the DDA questioned the safety of the steel structure. It hired Kimley-Horn and Associates to evaluate the tree’s steel frames. Some sections that were recently rebuilt were deemed to be in good condition, other sections were significantly corroded, according to its Feb. 2, 2015, letter to the DDA.
The steel pieces were stored in the city’s public works yard under a framed canopy that used to have a tarp. “The condition of the canopy frame indicates the tarp has been missing for several years,” a Kimley-Horn engineer wrote.
In July 2015, the DDA presented the City Commission with options: continue to spend on rehabilitating the current tree at a cost of $916,000 over five years, buy a new aluminum tree for $670,000 or rent one for $790,000. The amounts did not include assembly, disassembly or storing the tree.
The commission chose to continue using the current tree with corroded pieces replaced.
In December the interim city manager, Neal de Jesus,  walked through the current tree and was amazed how it could be constructed and stay erect. That led to discussions on the structural integrity of the tree when it was taken down after the holidays.
No structural engineer was willing to certify its integrity without an in-depth study, including X-rays of the frame, de Jesus told the commission in late January. He estimated the study cost would be $100,000. He didn’t recommend spending that amount with the strong possibility the current tree would need to be replaced.
The iconic tree has not been treated lovingly. It did not have a special storage spot within a climate-controlled environment. Its frame was piled in pieces outside for a number of years without protection from the summer rains. That resulted in yearly upgrades to the Christmas tree to make it safe for the hundreds of residents who pass inside daily during the Christmas season.