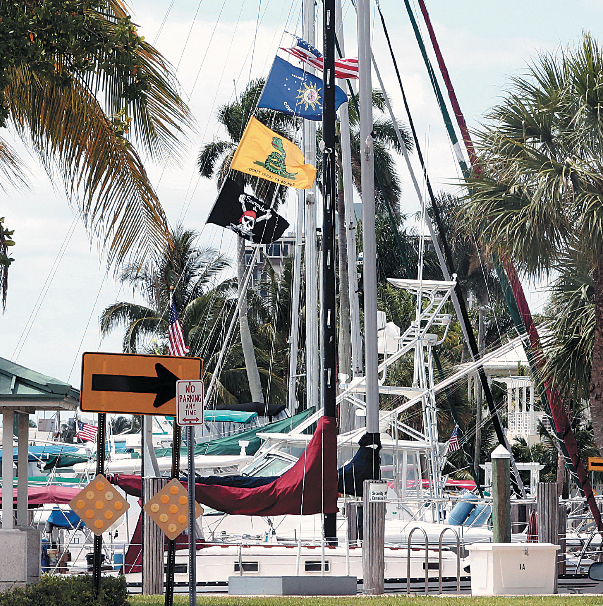 ABOVE: Boat owners at the Delray Beach Municipal Marina’s 24 slips were supposed to have moved their boats by May 1 to make way for renovations to the marina. BELOW LEFT: Marty Shapiro lives with his dog, Kosmos, on a trawler named Valkyries. BELOW RIGHT: Carlos Nin with his 50-foot Riviera powerboat. Photos by Tim Stepien/The Coastal Star 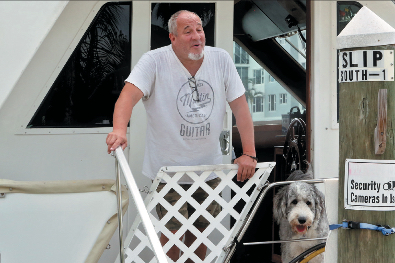 Boat owners were making plans to leave the Delray Beach Municipal Marina in mid-April as the city prepared the aging marina for a yearlong renovation that will include raising the sea wall to alleviate tidal flooding on Marine Way.
The city told owners of boats moored in the marina’s 24 slips to leave by May 1, even though the start date for construction remained uncertain.
As of mid-April, the city was reviewing bids and negotiating with contractors for the job, according to Tom Mueller, project manager for the Wantman Group, an engineering firm that designed the marina renovations. Permits for the work are in hand, Mueller said.
The marina overhaul means boat owners must find new homes for their vessels, and in some cases themselves, for at least a year.
Bill and Prudence Bains have lived on their 39-foot Carver at the city marina for eight years. They plan to have their boat hauled out for service at Murrelle Marine in Lantana, then head north to visit relatives in Rhode Island.
Bill Bains said he and his wife hope to move their boat back into a slip at the city marina after the renovation is complete. “Delray’s a nice town,” Bains said.
Carlos Nin, who lives in Delray Beach and enjoys spending weekends on his 50-foot Riviera powerboat at the marina, said he would move his boat east across the Intracoastal Waterway to the Delray Beach Yacht Club, but not until the May 1 deadline.
Nin said many other tenants at the city marina plan to move their boats to Suntex Marina in Lantana.
Marty Shapiro, who lives on a trawler named Valkyries at the marina with his dog, Kosmo, is using the marina renovation as an opportunity to feed his wanderlust.
Shapiro plans to take his boat to the Turks and Caicos Islands north of the Dominican Republic after spending a few months preparing for the journey at Suntex Marina.
Like Bains, Shapiro hopes to return to the city marina after renovations are complete — but only if the city doesn’t raise his rent too much beyond the current monthly rates: $22 a foot for a regular slip or $23 a foot for one of the eight live-aboard slips.
The city has not yet set prices for slips after the renovated marina reopens, said Delray Beach Parks and Recreation Director Sam Metott, whose department operates the marina.
Opened more than 80 years ago, the city marina has deteriorated in recent years, according to a summary of the marina renovation plans on the city’s website.
Pilings supporting the 704-foot sea wall and 10 finger piers have been compromised — problems compounded by exceptionally high tides in recent years have created an “aggressive saltwater environment” in which water rises over the top of the sea wall and waves from passing boats roll onto Marine Way.
Mueller said the marina’s rebuilt sea wall will be about 2 feet higher than the existing sea wall and will be comparable to the newly elevated sea wall at nearby Veterans Park.
In addition to the higher sea wall, the marina renovation will include new floating docks, new electric service for boats, new lighting, new landscaping, wireless internet service for boaters and a new sewage pump-out station near the center of the marina.
“It can only add to the value of the whole city,” said Earle Myers, a Delray Beach resident who enjoys walking on Marine Way by the marina. “Who comes to Delray and doesn’t walk along the Intracoastal?”