to lunch at the club, from which he is retiring after 35 years. 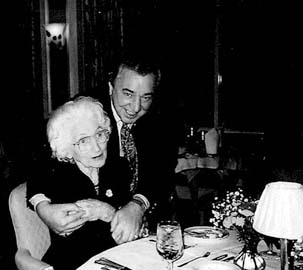 When he looks around the formal dining room at The Delray Beach Club, the maitre d’ sometimes sees things that aren’t there.
“When I first came here, this was a solid wall,” he mused one recent Friday morning, pointing out at the ocean waves through a floor-to-ceiling window as servers hurried about, setting up for a private luncheon. “The bandstand was against that wall” — he spun about — “and the dance floor was between those columns.”
When Michael Matriccino first came here in 1978, the private club itself was only 8 years old, and he had already been working in South Florida hotels and clubs for more than a quarter-century.
“I was 6 when he came to work here!” marvels Shane Peachey, the club’s general manager, “and he’s still all over it. Michael has that classic, Old World charm from once upon a time, when you opened doors for a lady.”
In the club’s December newsletter, Peachey announced that Matriccino will retire after 35 years as the club’s maitre d’.
“Michael is a true professional,” Peachey said. “He makes parties happen, and he makes people happy through his hard work and determination.”
The hard work has clearly not been too hard on Matriccino, who turned 82 on Dec. 2 but could easily pass for a man 20 years younger. Seated at a table by the window that used to be a wall, reflecting on his 62-year career, he was often called away to check the seating plan or confer with a club member.
“People don’t understand what a maitre d’ does,” he said. “They think I just greet people and make tips, but it’s not that way. I set up the parties, arrange the floor seating for every function and complete the contracts for all the food and drink.”
In less than an hour, he would greet 45 ladies arriving for a luncheon lecture celebrating the late writer Nora Ephron.

“Then tonight I come back and set up for a tennis luncheon at noon tomorrow, and then a 5 p.m. wedding.”
His first job was a bit more humble.
Born in Freeland, Pa., Matriccino quit high school at 15 and headed to Las Vegas, along with a friend and the promise of jobs at a new racetrack.
The racetrack never opened, but the friend knew the actress and comedian Martha Raye, who found the stranded boys work at a casino.
“I worked in the dealers’ room,” he recalled, “bringing them coffee from 11 p.m. to 7 in the morning.”
Back home and unemployed in Freeland, Matriccino spotted a newspaper ad for work at The Breakers hotel in Palm Beach. He sent in his application and was offered a dishwashing job. He accepted, and the hotel founded by Henry Flagler sent him a ticket on the railroad founded by Henry Flagler.
“When I got off the train in West Palm Beach, a guy held up a sign with my name on it and they put me in a limo.”
It was 1951, he was 20, and the career had begun.
“I made $25 a week with room and board, and worked my way up to vegetable server,” he says. “I’d scoop the vegetables onto those little monkey dishes. Side dishes. That’s what we called them.”
From monkey dishes, he was promoted to sauces, and then to server. In the off-season, he worked the Essex & Sussex Hotel in Spring Lake, N.J.
“I taught myself,” he explains. “I went to every station and learned.”
In 1958, he moved to the Hollywood Beach Hotel, starting as a bus boy and working his way up to catering manager.
Ten years later he moved up the coast to the Boca Raton Resort & Club.
“I got a $750 tip there once,” he says. “From just one person, at a bankers convention. People don’t tip like that anymore.”
Another decade and in 1978, he arrived at The Delray Beach Club and stayed, serving three decades of members and guests while earning the respect of his colleagues.
“I’ve been in the business 32 years and there is no one like him,” says Michele Freimann, the head server. “I’ve never heard anyone say a bad word about Mr. Matriccino.”
The secret, Matriccino says, is loving what you do and treating people right.
“I call everyone Mr. and Mrs.,” he notes. “Some say, ‘You can call me Joe.’ ” He wags a finger. “Oh, no.”
In the beginning, he wore a tuxedo. Now it’s gray slacks, a dress shirt and matching necktie.

The world’s a more casual place. Even jackets and ties are no longer required. But Matriccino has mastered the art of balancing formality and friendliness in a way that makes his guests feel welcome.
“The day this guy leaves here, this place will never be the same,” says France Ferring, the dining room manager. “He can flip this dining room over for another 200 people with his eyes closed and still know where everybody’s sitting.”
Officially, Matriccino will leave at the end of the month, Peachey said, but the exact date will be determined by the need to find and train a replacement.
Divorced long ago, he has three adult children, seven grandchildren and two great-grandchildren to fill his retirement years. But no golf clubs.
“I never had time to take up golf,” he says with a laugh. “It was a hard life, but I enjoyed it. The biggest part is loving the business — the people, the other employees …”
Matriccino peered out the window that used to be a wall.
“The members make this club, really,” he said. “You don’t meet many people who work in a place 35 years.”