The developer of Atlantic Crossing has hired veteran local architect Bob Currie to redesign the controversial project to win City Commission approval.
Commissioners approved 356 rental apartments on the East Atlantic Avenue property after heated debate last year.
The developer returns before the city this month to get approval for the project site plan and design.
“The difficult challenge with a project this scale is to find an approach that doesn’t feel like a project this scale,” said Don DeVere, project manager for the Edwards Companies. 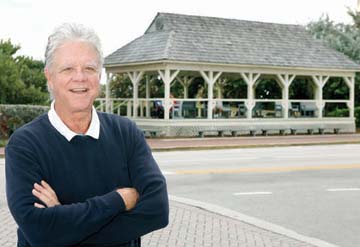 Currie has earned local respect with his architectural designs for Old School Square, Sundy House, the Marriott Hotel, City Hall and other Delray Beach projects.
“Bob is a great resource because he’s got a long-standing history of being involved in the resurgence of Delray Beach,” DeVere said. “He is passionate and protective, and he understands the local aesthetics.”
DeVere declined to release renderings of the redesign that city officials will see when Atlantic Crossing files its site plan this month for approval.
But he said Currie’s firm and three others have broken down the massive appearance of Atlantic Crossing by giving each building within the project its own unique architectural design. A building with a modern design, for example, could be built next to one with a Mediterranean style.
“Bob is able to weave these designs together and bring out each style,” DeVere said.
Currie said the project now looks “like it has been created over time by different hands.”
Architects also have tried to soften the massive appearance by designing facades with openings, balconies and upper-floor setbacks. The street-level redesign encourages more pedestrian movement with covered walk areas, benches and fountains.
Currie is vice chairman of the Beach Property Owners Association, which decided not to join a lawsuit filed by some neighbors protesting the density and height that commissioners approved for Atlantic Crossing last year.
Bill Morris, a local consultant for the Ohio-based developer, says Currie’s hiring is a response to those neighborhood concerns.
“There have been many changes to be compatible with the surrounding neighborhood — changes that people wanted to see,” said Morris, who lives in coastal Delray Beach. “Bob doesn’t mind speaking his mind. He can be very critical about things he doesn’t like.”
The BPOA asked the developer to improve the appearance of the southeast corner of the project that coastal residents see as they drive west across the Atlantic Avenue Bridge. Currie says architects responded to that concern and all others raised by commissioners and neighbors.
“Trust me — they are listening to the community,” Currie said. “I’m surprised by how much time and effort they are putting in.
“We critique their work as professors would do. They hired us because they know we are a part of this town and care about it.
“This is probably the most important project that Delray Beach will see,” Currie said. “We’re creating an architecture that fits in our town and enhances the progress that Delray has already made.”