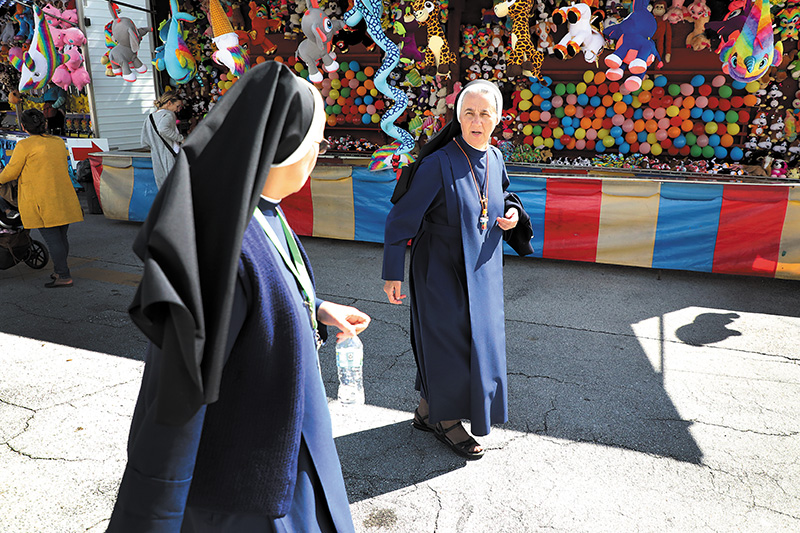 St. Vincent Ferrer Church and School on George Bush Boulevard in Delray Beach is the spiritual home to 3,600 Catholics, one monsignor, five visiting priests, three deacons, 52 teachers and staff.
And two nuns.
Both nuns belong to The Little Servant Sisters of the Immaculate Conception. Both are from Poland. And both are named Elizabeth.
Sister Elizabeth Halaj arrived from the order’s provincial house in Cherry Hill, New Jersey, in late June. Sister Elizabeth Kulesa came in early August.
To avoid confusion, they are commonly referred to as Sister H. and Sister K.
Sometimes, though, they’re called Sister Happy and Sister Kind.
Spend a little time with them and you’ll know why. 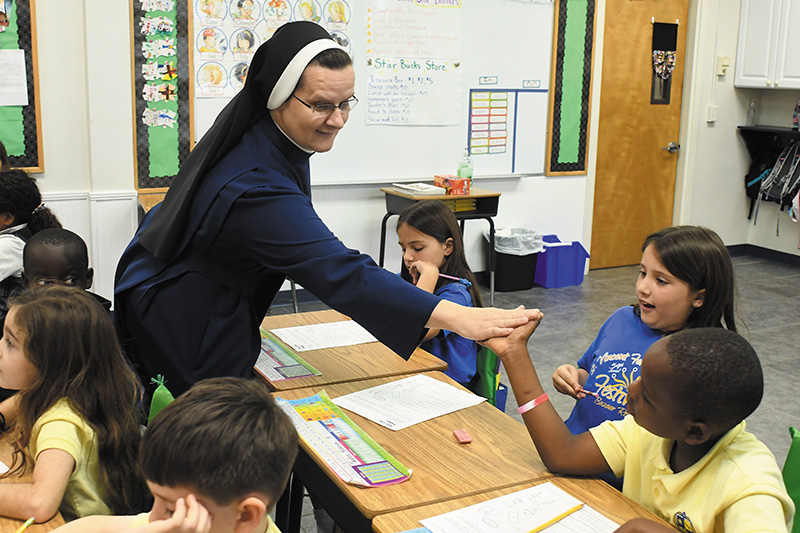 Sister Elizabeth Halaj gives a student a high-five after he answered a question in class. Jerry Lower/The Coastal Star

“What letter comes before B?” Sister Elizabeth H. asks, and her class of second-graders answers, “A” and fills in the blank space on their “Setting The Table” quiz.
“Correct. Now what letter comes before M?”
They fill in the L. And then the T, the A again, and the R.
ALTAR.
“Now, how do we call this cup?”
C-H-A-L-I-C-E.
By the end of the hour, the children, who will make their first Holy Communion this year, have met the components of the Eucharist.
“What is the Eucharist?”
“Jesus’ body.”
This is Sister H’s day job. 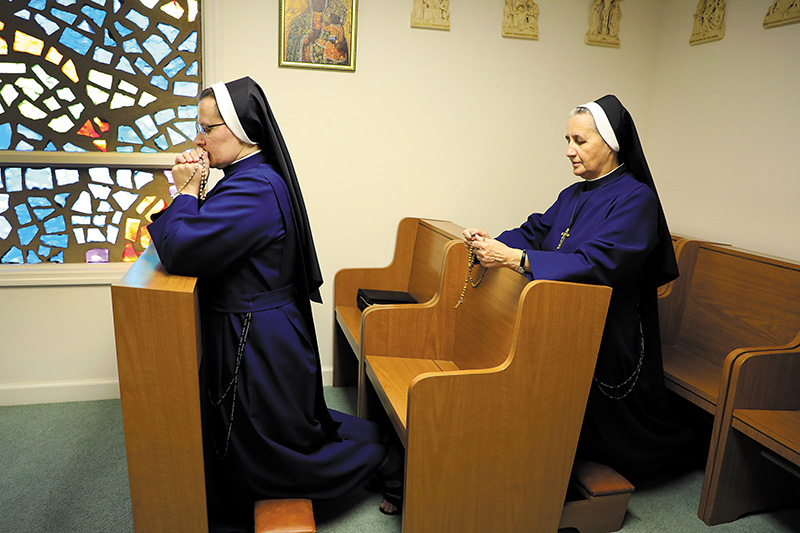 Sister Elizabeth Halaj and Sister Elizabeth Kulesa pray in the convent in which they live near St. Vincent Ferrer Church and School in Delray Beach. Halaj previously worked in the Philippines and Jamaica. Kulesa taught in her native Poland and in the U.S. Northeast. Rachel S. O’Hara/The Coastal Star

When she was a kid herself, Sister Elizabeth Halaj didn’t want to be a nun.
She wanted to be a clown.
And then one day, as she walked with her brother near their home in southeast Poland, a drunk driver swerved off the road.
Her brother was 15. She was 9. He was killed. She was unharmed.
“That was the last time I spoke with my brother,” she says, “and the first time we had dinner without him. My brother was ready for heaven, but God had a plan on Earth for me.”
At 19, just out of high school, she joined the Little Servant Sisters. That was 28 years ago.
“We are not brainwashed,” she exclaims. “If someone had forced me to be in the convent, I would be the first to run.
“Of course, if I compare myself to my friends from high school, I do not have what they have. A car, a bank account, a credit card. But I have what I need. I’m surrounded by people who love me, food on the table, a place to stay, and most of all, I have Jesus in my heart.”
She smiles a huge, joyful smile.
“As a little kid, I wanted to be a clown and make people happy. And my dream came true! I make people happy!”

The Little Servant Sisters of the Immaculate Conception was founded in 1850 by a man whose dream didn’t come true.
Edmund Bojanowski was born in Warsaw in 1814, a son of the nobility with devout parents. At age 4, he became ill, and doctors doubted he would survive. According to church history, the boy died, but returned to life a short while later and dedicated his life to the Virgin Mary.
Too ill to study for the priesthood, Bojanowski read Scripture constantly and attended confession weekly. He fed the hungry, established libraries, hospitals and nursing homes, and founded or co-founded four separate religious orders, including the Little Servant Sisters.
In 1869, Bojanowski attempted to resume his studies for the priesthood, but died on Aug. 7, 1871, before he could be ordained. He was 56.
Today, the Little Servant Sisters has about 1,300 members worldwide.
On June 13, 1999, Pope John Paul II beatified Bojanowski — a step toward sainthood — after doctors concluded a miraculous healing had occurred because of his intercession. 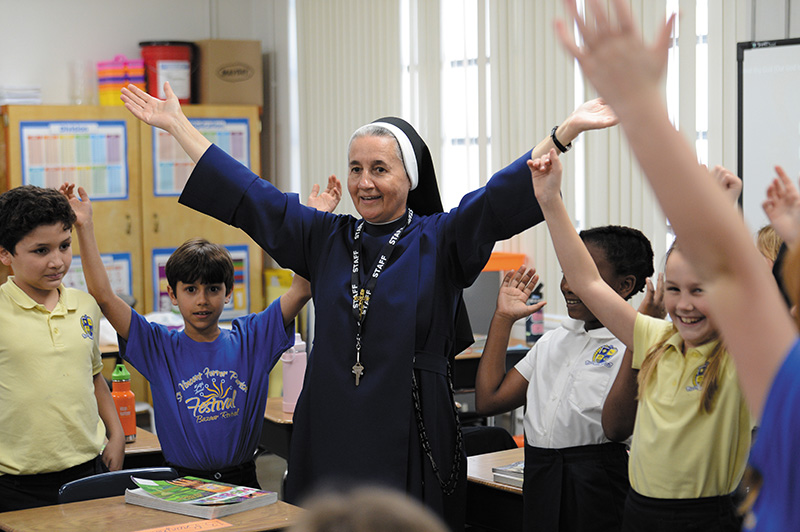 Sister Elizabeth Kulesa lifts her arms during a song with students at St. Vincent Ferrer School, which has students from prekindergarten through eighth grade. Jerry Lower/The Coastal Star

A poster on the wall in Sister Elizabeth Kulesa’s classroom reminds her third-graders that Sacraments Are Signs Of God’s Love For Us.
“Baptism is the first sacrament,” she tells them. “The candle is the symbol of baptism.”
“Thank you, Jesus,” the children respond in unison, “for the sacrament of baptism.”
“This is a stole, the symbol of the priest.”
“Thank you, Jesus,” the children respond.
By the end of the hour, the children will have thanked Jesus for all seven Catholic sacraments.
“Beautiful,” Sister K. says, and they all face a TV screen and sing along to a video.
“Our God is a great big God,” they sing, “and he holds us in his hands.”
Sister K. sings along softly, lifting her arms with the children to show God holding them all in his hands.
“I try my best,” she says as they leave, “and I put everything in God’s hands.”

Poland is the most devoutly Catholic country in Europe, and Tarnow the most devout city in Poland. In 2007, church statistics found 72.5% of the city’s diocese attending Mass every week.
Sister Elizabeth Kulesa grew up in Tarnow.
“I recognized my vocation in second grade,” she recalls. “I was 10 years old and I felt the calling.”
As a little girl, she and her friends would visit an elderly woman who lived near their school, a lonely woman who enjoyed their visits. This was when she first knew she should serve Jesus by serving others.
When she was a young teen, a priest organized a youth group that visited shrines. Once, after a visit to a monastery, she made a commitment to pray for the monks for two years.
At 15, she made a vow of abstinence.
“My friends said, ‘How could you do it?’” she remembers. “I was called to give up my country and give the light to Jesus.”
Does she remember the day she took her first vows as a Little Servant Sister?
“Of course!” she says. “Feb. 2, 1979. I was 17.”
Now she is 58.
“But I feel very young because the soul is immortal. It never gets old. You experience more love as you grow older.
“The body gets old, but I feel very young in my soul.”

Now they have come to serve the faithful of St. Vincent Ferrer, but only after their God had called them to other places.
“God sent me to Delray Beach,” Sister Elizabeth H. says. But he sent her to the Philippines first, where she taught the children of domestic workers in a town where there was no school and she sometimes drew her lessons on the ground with a stick. In Jamaica, she was a preschool principal.
Sister K. had spent nearly a decade teaching in Poland before coming to America, where she taught in Doylestown, Pennsylvania, and Staten Island, New York.
“Now it’s God’s gift for me to be here,” she says. “Florida! I love the nature here.”
Ask about their social lives, and they are vague.
Sometimes in the evenings they watch I Love Lucy on tapes.
The church and its people are their life.
“I could go to Disney World,” Sister H. says. “Mother Superior would give us the money. But how many people could I feed with that money? I remember children in Jamaica coming from the bush, hungry.” 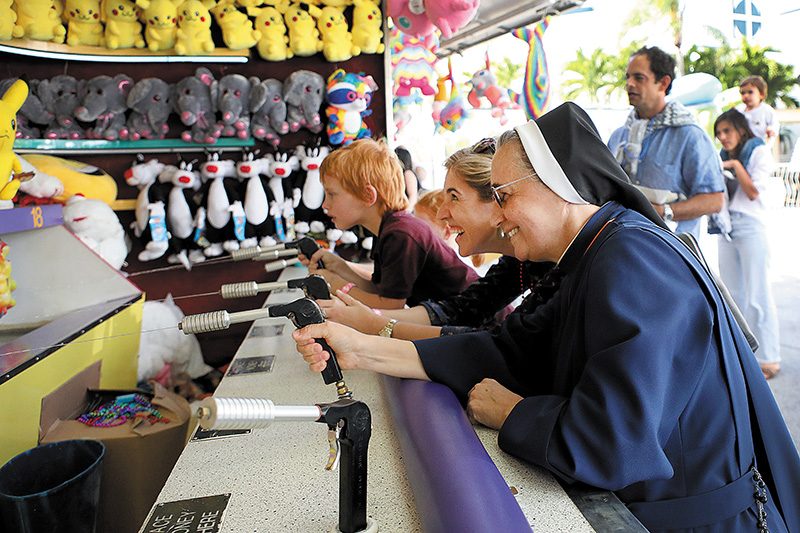 On Saturday, Feb. 22, as throngs of men, women and children in blue jeans, shorts and T-shirts wandered among the carnival rides at the church’s 54th annual Parish Festival, the Sisters Elizabeth did the same in their habits and veils.
At the Tacos Veracruz wagon, Sister H. finished off a pork taco as a gaggle of children watched.
“Do you want to go for a ride?” she asked. “Let’s go!”
Like a devout pied piper, she led them swiftly to the Tilt-A-Whirl and squeezed into a car with four preteens and another boy, to be lifted, dropped and spun at a dizzying speed, smiling all the while.
Later, she found Sister K. at the Water Gun Fun game.
“What are you doing!” Sister H. gasped, mouth agape in mock horror.
A nun with a gun! What would Jesus say?
It’s a water gun, Sister K. told her, patiently. And besides, she didn’t understand the rules and didn’t win anything anyway. 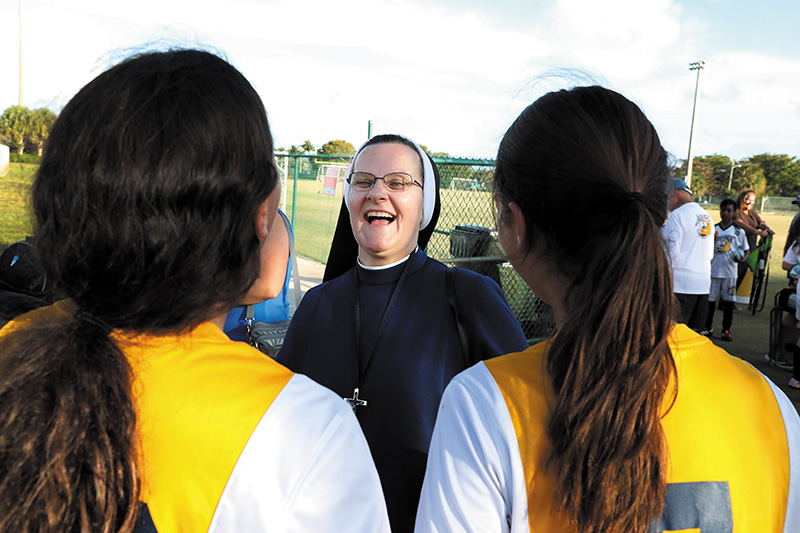 The pastor at St. Vincent Ferrer Church is Monsignor Thomas Skindeleski — a tall, burly, beaming man known to one and all as Monsignor Tom.
While the Sisters Elizabeth enjoy the rides and games, he’s in the kitchen, stirring and tasting the famous clam chowder he makes for the festival, 32 gallons every year.
“Sister H. and Sister K.,” Monsignor Tom says with a chuckle, “Sister Happy and Sister Kind. I’m so glad to have them here. They’re very present among the people of the parish.”
Not pleasant — though they are that — but present.
One day after class, Sister K. confessed that teaching children to say “Thank you” for each of the seven sacraments is not exhausting or difficult work.
“It’s not the work we are doing,” she said. “Anybody can do it. It’s what we are. We are an example of being 100% for Jesus.”
In other words, these nuns’ greatest present to this parish is simply their presence.
Sister Kind glows with a quiet inner peace. Her walk is purposeful, but she doesn’t rush. Her smile is gentle, her voice is soft. She embodies the patient kindness that makes those who meet her want to be more kind.
Sister Happy sparks and crackles with her love for Jesus. She strides quickly along the halls. Her smile is huge, her laugh is loud. She is, to be honest, a bit of a clown.
“I have never gotten even one paycheck with my name on it,” she will tell you. “Our benefits are very small, but our retirement plan is out of this world.”
And her face breaks into that huge, joyful smile.
“Heaven!”