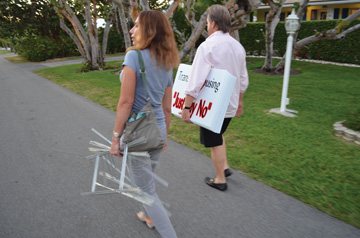 By Tim Pallesen and Antigone Barton

As Delray Beach moves aggressively to restrict addiction-recovery houses amid single-family homes, the threat of a legal battle increases.
The City Commission will decide this month whether to limit how often rooms can be rented in single-family neighborhoods.
The city’s outside attorneys are advising whether a request by Caron Treatment Centers to house wealthy, recovering addicts on Seaspray Avenue can be denied.
And a city official says Caron lacks a necessary landlord permit to operate another sober house on Ocean Boulevard.
“If they do any of this stuff, they’re going to get a lawsuit,” Caron Executive Vice President Andrew Rothermel warned.
Meanwhile, residents living near the two, ocean-side million-dollar homes that Caron intends to convert into upscale recovery houses, are working to sabotage Caron’s marketing promise of recovery in “anonymity and discretion.”
Three large signs decorate the lawn across the street from 1232 Seaspray Ave. 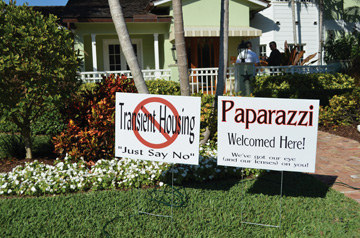 “Caron, your business is NOT WELCOME in our Single Family neighborhood …” the largest one reads.
“Paparazzi Welcome Here! We’ve got our eyes (and our lenses) on you!”
Neighbor Kelly Barrette has passed out some 100 additional signs that urge neighbors to “Just Say No” to transient housing.
“It’s a single family residence community,” Barrette said. “It’s the constant turnover of people who we never get a chance to know. It’s a transient issue.”
Those signs have spread across coastal Delray Beach and are posted across the street of another house Caron purchased at 740 N. Ocean Blvd. as well as along Nassau Street to the south, where Caron was once rumored to be eying a house.
Caron has said its clients will receive all their clinical treatment at its facility in Boca Raton.
But Caron’s assurances that the “boutique” center would offer “exclusive services” and house wealthy, elite and “discerning” clients paying upward of $60,000 a month has done little to comfort neighbors, Barrette said.
“Like having Lindsay Lohan in there was going to make it better,” she said.
Rothermel insists that Caron will maintain the values of the neighborhood. He asks that neighbors, “let us prove to them that we’re going to be good neighbors.”
He said one house would be for recovering men, the other for women. He added he hoped clients would be moving in by the end of this month.
Neighborhood resident and attorney Mindy Farber said she is concerned that Caron, citing federal regulations, won’t disclose the names of the clients or the nature of the problem being treated.
“They’re not saying if it’s sexual predators or people who are registered sexual offenders,” she said. “It’s one thing to be a friendly neighbor; it’s another not to be told who your neighbors are. It’s totally creepy.”
It’s also an issue that seems increasingly likely to end up in federal court.
Last month, the city hired its Miami and Washington, D.C., law firms after coastal residents learned in December that Caron was buying houses near the ocean.
City commissioners asked the city’s planning and zoning board to review a proposal to lower the number of times that bedrooms can be rented in a single-family home from six to three times a year. The planning board has recommended only two rentals per year.
That proposal is scheduled to be back before city commissioners on Feb. 7 after outside attorneys review its legality.
“We are running absolutely everything by outside counsel now,” assistant city attorney Terrill Pyburn said.
The Miami law firm of Weiss Serota Helfman Pastoriza Cole & Boniske and the Washington, D.C., legal and lobbying firm of Patton, Boggs and Blow were hired to determine whether the city’s laws can be tightened to restrict either the number of the unrelated people or length of stay in a house.
A lawsuit would pit the same two attorneys who battled over Boca Raton’s attempt five years ago to restrict sober houses. Boca Raton was sued when it said no more than three unrelated people could live in a single-family home.
The federal lawsuit resulted in a judge reaffirming that recovering alcoholics and drug addicts have protection under the federal Fair Housing Act and Americans with Disabilities Act.
The judge ruled in 2007 that Boca Raton’s limit of three patients created a “disparate impact” on patients. Attorney James Green, representing the American Civil Liberties Union, had argued that sober house patients have a greater chance of recovery if more patients are in the house.
The judge lifted his injunction after a procedure was adopted in which treatment providers can request a “reasonable accommodation” to allow more than three patients in a sober house. That procedure is followed now in both Boca Raton and Delray Beach.
Rothermel warns that Delray Beach will lose in court, too, if it attempts to restrict recovery houses in other ways.
“The politicians are clearly pandering to property owners east of the Intracoastal Waterway,” he said. “They can’t restrict sober living. They can veil their actions, but they’re clearly discriminatory under the Fair Housing Act. The city is going to waste a ton of time and money.”
Green now represents Caron. The city’s lead attorney is Matthew Mandel, who represented Boca Raton.
Caron on Dec. 19, requested a reasonable accommodation to allow seven clients to live in a five-bedroom, $3 million house at 1232 Seaspray Ave. it purchased last month. The city has until early this month to decide whether to grant the request and if it denies, Caron has 30 days to appeal to the City Commission.
A reasonable accommodation waiver has already been granted to Caron to house seven patients at 740 N. Ocean Blvd.
But a city official says that Caron can’t open the house until it gets a permit required for anyone who rents residential property.
“They will be required to have a landlord permit,” said Lula Butler, the city’s community improvement director.
Rothermel disputes that Caron needs such a permit. “Our patients are not renting real estate,” he said.
City officials early last year approved the reasonable accommodation request for 740 N. Ocean Blvd. without asking Caron for the address.
The planning and zoning board recommended at its Jan. 23 meeting that an address be required for future applications.
“We’re trying to come up with something that makes it difficult to operate in single-family neighborhoods,” board chairman Cary Glickstein said of the city’s efforts.
“Caron is exploiting something the fair housing and ADA laws never intended to allow addicts perhaps with criminal records to live there,” Glickstein said. “It’s just a matter of time before this gets shut down.”
And however long that takes, residents vow, the signs will remain posted. “This is a statement we felt like we needed to make,” Barrette said, “to make sure they continue to hear us.”