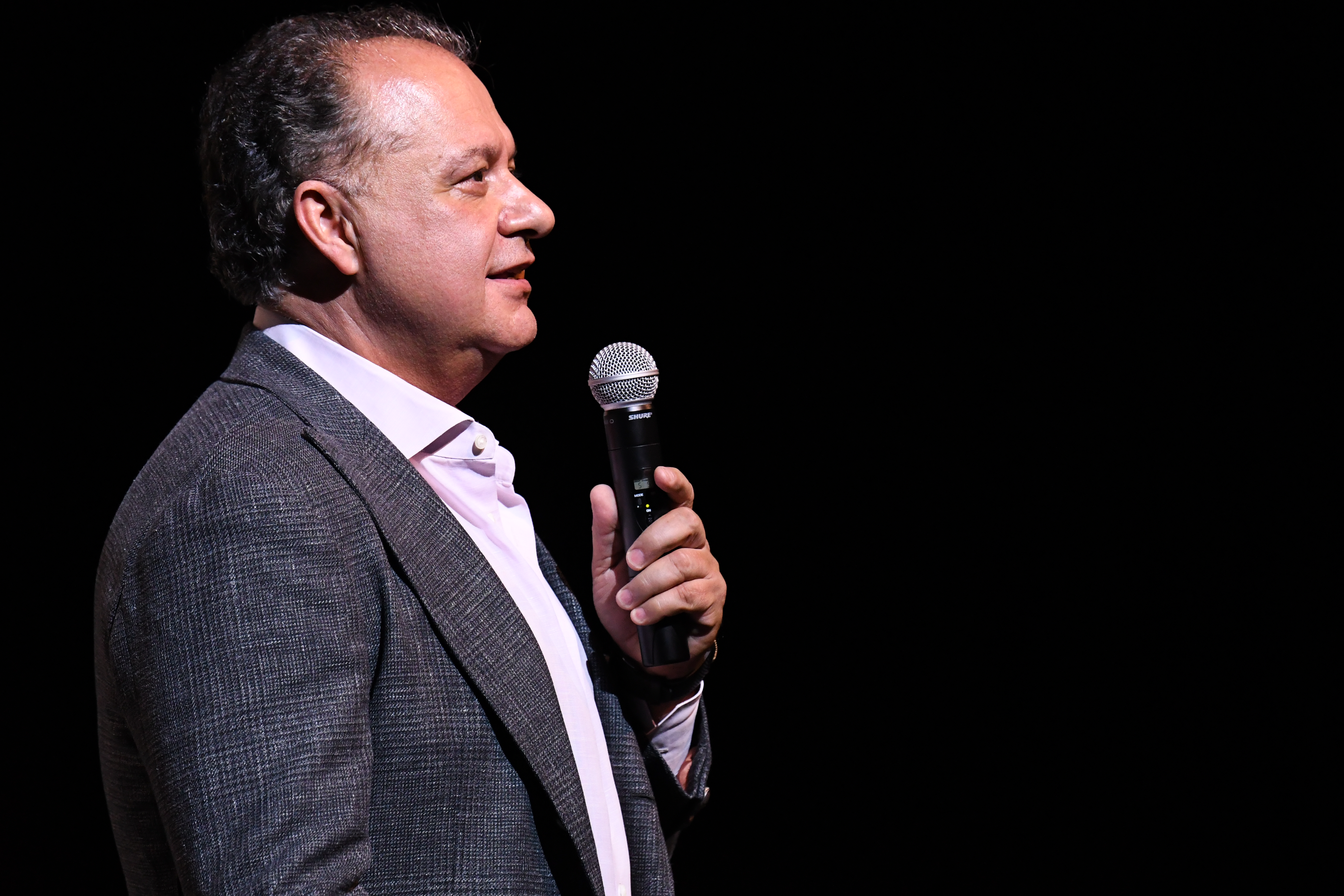 By Jane Smith and Mary Hladky

One week after iPic Entertainment filed for Chapter 11 bankruptcy protection, company founder and chief executive Hamid Hashemi stood before the Downtown Development Authority attempting to conduct business as usual.
Hashemi wanted the board to approve a restaurant on the third-floor terrace of his newest theater, which opened in downtown Delray Beach in March.
Board members peppered him with questions: Would the restaurant solve iPic’s financial problems? Why was Hashemi backtracking on previous assurances that the theater would not have a restaurant? When would iPic move its headquarters from Boca Raton to Delray Beach as promised?
As he responded, Hashemi lamented the six years it had taken to complete negotiations with the city and build the theater, causing cost increases that contributed to iPic’s financial woes.
“In 2013, when we signed up to do this project, it was a $30 million project,” he said. “Now it’s a $60 million project with 40 additional public parking spaces. We gave 8 feet of alley away.
“We gave and gave and gave. … This has been the most disappointing experience of my life.”
The DDA board approved iPic’s restaurant by a 4-3 vote on Aug. 12 on the condition that iPic appear before another city advisory board to make sure its complex has adequate parking.
But even if other city boards and the City Commission approve, that restaurant’s opening and iPic’s corporate office relocation are in doubt.
Seeking bankruptcy protection allows iPic to restructure its debt or find a buyer. If it’s unsuccessful, the company could liquidate.
While iPic is searching for investors and buyers, it will ask a bankruptcy court judge at a Sept. 11 hearing to approve an auction of its assets.
It’s not known if iPic will emerge from the process in a position to continue its expansion plans, refurbish existing theaters or absorb the cost of a corporate move.
But for now, iPic says its 16 theaters in nine states will continue operating and vendors will be paid.
In South Florida, other iPics are in Boca Raton and North Miami Beach. The company has planned to open iPics in Fort Lauderdale and Sunrise next year.
The Boca Raton theater and adjacent Tanzy Restaurant in Mizner Park opened in 2012. Unlike in Delray Beach, which gave incentives to build the theater, Boca Raton offered no incentives and the project was not controversial.
When iPic launched in 2010, it offered a new concept: luxury theaters with reclining seats, quality food and drinks brought to patrons, and pillows and blankets.

Troubled waters
But in the years since, theater patronage has decreased nationwide as people opt to stream movies in the comfort of their family rooms. At the same time, larger theater chains copied iPic’s dine-in option and reclining seats.
Trouble has been brewing at iPic for some time.
The company completed an initial public offering on Feb. 1, 2018, that raised $15.1 million from shares priced at $18.50, far less than the $30 million to $50 million Hashemi hoped for.
In a U.S. Securities and Exchange Commission filing earlier this year, iPic reported operating losses in 2017 and 2018 and said it expected losses to continue for the next several years as it continued building up to 25 theaters in the U.S.
Yet its officials were optimistic, with plans to build theaters in Saudi Arabia, which in 2018 announced it would allow commercial movie theaters to open for the first time in more than 35 years.
But iPic’s financial problems worsened during the first quarter of this year, when revenues dropped to $30.2 million compared to $38.7 million for the first three months of 2018.
In a May 20 conference call with investors, Hashemi said company officials were “surprised” by the decrease. He attributed it to the lack of a blockbuster movie in the first quarter, the government shutdown in January that affected iPic theaters near Washington, D.C., and in the Northeast, and a brutal winter that kept audiences at home.
Warning signs flashed red when iPic missed a $10.1 million interest payment due July 1 to the Teachers’ Retirement System of Alabama and the Employees’ Retirement System of Alabama, which had lent iPic $205 million.
In a July 26 SEC filing, iPic warned it might have to seek bankruptcy protection, triggering a stock price plunge to just over $1.
On Aug. 5, iPic did just that. The company’s filing in Delaware bankruptcy court lists $290.9 million in debt, mostly owed to the Alabama retirement systems, and $157 million in assets.
A spokeswoman for the retirement systems declined to comment.

Delisted and up for sale
IPic’s stock was delisted on Nasdaq on Aug. 14, and it traded on the over-the-counter market at 45 cents per share as of Aug. 30.
IPic can keep going for now because the pension funds lent it an additional $16 million to cover operating expenses and costs associated with its bankruptcy case.
The bankruptcy court proceedings are moving rapidly. A slew of motions filed by iPic will be heard Sept. 11. The company, which is seeking to sell to the highest bidder, has asked the court to approve an Oct. 17 asset auction and an Oct. 25 sale hearing to authorize the sale of assets.
IPic’s hunt for investors and buyers is on. Its investment banker, PJ Solomon, has contacted 64 potential investors and buyers, of which 31 had signed nondisclosure agreements and six were negotiating agreements to see confidential company information, according to an Aug. 15 iPic filing in the bankruptcy case.
IPic has cited several reasons for its financial problems, including delays in building out its theater chain, the high cost of capital, and depletion of funds “before the company was able to reach critical mass.”
But Hashemi pointed to the difficulties in building the eight-screen Delray Beach theater as a major issue for his company.
“Importantly, delays related to the Delray Beach location resulted in unforeseen costs and a significant slowdown in circuit-wide development and new grand openings,” he said in announcing the bankruptcy filing.
Mayor Shelly Petrolia pushed back against ideas that the city bears the blame for iPic’s woes, and that iPic did all the giving in its dealings with the city.
“We gave as much as we could,” said Petrolia, who has consistently voted against iPic’s requests. In May, “my colleagues allowed (Hashemi) to regain the public terrace space to open a restaurant … without giving back something to the public in return.”
Former Mayor Cary Glickstein, who voted for iPic’s waiver requests, believes the city is not responsible for the project delays.
“I think Hamid is cherry-picking his facts when blaming the city for the delays,” he wrote in an email.
Glickstein did fault the way the land sale to iPic was handled. The city’s Community Redevelopment Agency wrote the sale contract.
“The CRA — its board, executive leadership and attorney, as well-intentioned as they were — was not equipped to underwrite a project of this magnitude and complexity,” he wrote. “Incomplete documents create ambiguity. … A far more comprehensive contract could have reduced much of that.”
The CRA approved the sale of prime downtown public land to iPic, the winning bidder, in 2013, but the City Commission didn’t approve the project until 2016. Disagreements over building height, setbacks and parking contributed to the time lapse.
Even then, not all issues were resolved. Most recently, iPic asked to add the restaurant even though it had agreed earlier to use the space as a terrace open to the public.
IPic attorney Bonnie Miskel told the Sun-Sentinel in June that iPic was responding to public demand for a restaurant. The restaurant, she said, also would bring in revenue to help defray the cost of complying with city demands that have led to a doubling of the initial cost of the project.
The project, now known as 4th & 5th Delray, was controversial. Some residents thought the project — which includes office space, retail and a parking garage just south of Atlantic Avenue between Southeast Fourth and Fifth avenues — was too big and would generate too much traffic.
But many city leaders liked the idea of a movie theater as a way to diversify an area dominated by restaurants and bars.
After lengthy delays, iPic closed on the sale of 1.6 acres, paying $3.6 million in late April 2017. A few weeks earlier, a new entity called Delray Beach 4th & 5th Avenue paid $2.3 million for .14 of an acre to provide a loading zone at the city’s insistence.
The same day the 1.6-acre sale closed, Hashemi’s Delray Beach Holdings sold the land to Delray Beach 4th & 5th Avenue. That entity’s joint venture partner is Samuels & Associates of Boston and its investor partner is American Realty Advisors, based in Los Angeles. Hashemi retains a small stake.
Incentives given by the CRA to get the iPic deal done included paying iPic $400,000 of taxpayer dollars to offset iPic’s cost of providing 40 additional parking spaces in the garage. This ignored the CRA’s rule that it not provide incentives to businesses east of Swinton Avenue.
The CRA also agreed to pay iPic $75,000 annually for maintaining 90 public parking spaces in the garage.
In contrast to the drawn-out wrangling in Delray Beach, two Boca Raton City Council members recall no issues before iPic in 2012 to opened its ninth theater, in Mizner Park, where Hashemi already had an office. IPic replaced another theater that had closed.
“I think people were very happy to have a theater there, to have it revived,” said council member Andrea O’Rourke, then president of the Golden Triangle Neighborhood Association, who won election in 2017. “At the time, it was very exciting. It was the first theater like it.”
“IPic wasn’t just the cool new thing when they opened,” said Mayor Scott Singer, first elected to the council in 2014. “They continue to be the cool new thing. I don’t think anyone is doing it better than they are.”
In 2000 Hashemi, then a Muvico executive, built the Palace 20 theater by the Boca Raton Airport.
IPic’s landlord in Boca Raton is Brookfield Property Partners, the owner of Mizner Park. A Brookfield official did not return calls requesting comment.
A March loan modification agreement between iPic and the Alabama pension funds shows that the company was saving money by halting a planned $4.1 million renovation of the Boca Raton theater. The money was to be used for operating expenses instead.