A couple poses outside the Seacrest Hotel, where the Delray Beach Marriott now stands, on Atlantic Avenue just west of Ocean Boulevard in the 1940s. Delray Beach Historical Society

Delray was once a farming mecca, shipping pineapples and gladiolus all over the country.

“Everything changed in the 1920s,” said Winnie Edwards, executive director of the Delray Beach Historical Society.

Early pioneers had farmed the rich, muck soil. Soon, they would face increasing competition from other growers. That’s partly why Delray Beach turned to tourism to supplement its economy.

In 1925, the Chamber of Commerce plotted a marketing campaign, Write-a-Letter. Nearly everyone in Delray Beach participated, inviting out-of-state residents to come to Florida and eat lunch in Delray Beach, stay in its brand-new hotels and, of course, look over the city.

Pesticides and other practices helped to eradicate the mosquitoes that plagued early pioneers. When the real estate boom of the 1920s arrived, Delray Beach was ready to transform into a resort city, said Dorothy Patterson, who was the first archivist at the Historical Society.

Several hotels, such as the Alterep, the Seacrest and Casa Del Rey, were built on Atlantic Avenue for visitors, according to the book Delray Beach that Patterson wrote with Janet DeVries.

Guests at the Casa Del Rey enjoyed a top-floor restaurant with a retractable roof, the book said. The hotel survived the 1928 hurricane. When it was sold, the new owner changed the name to Hotel Bon-Air. 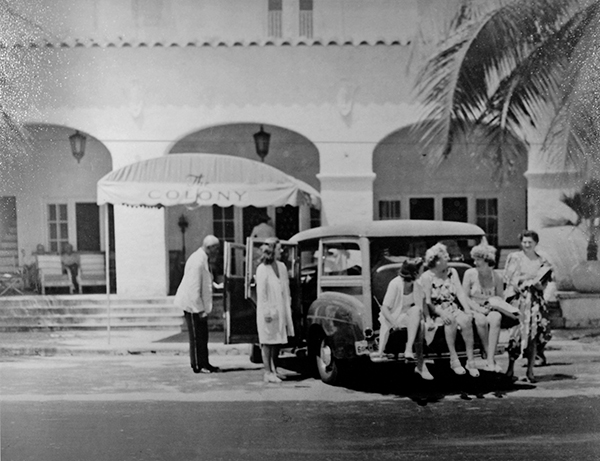 The Colony in the late 1930s. Delray Beach Historical Society

Farther east on Atlantic Avenue, the Alterep became the Colony Hotel in 1935 when purchased by George and Agnes Boughton. Their daughter, Jestena, manages the historic landmark, built in 1926. She recalls taking dancing lessons at the Bon-Air, a few blocks west on Atlantic.

Tourists, especially artists and celebrities, helped the city to weather the Great Depression in the 1930s.

Hilary Roche, managing director of the Colony and Boughton’s cousin, is confident the Colony can weather the influx of hotels under construction or in the planning stages.

The Florida Mediterranean-style, twin-domed, 66-room hotel has changed little over the years. The Colony has its original, manually operated elevator and is listed in Historic Hotels of America.

“We have the only hotel [in Delray] with a historic designation,” Roche said.